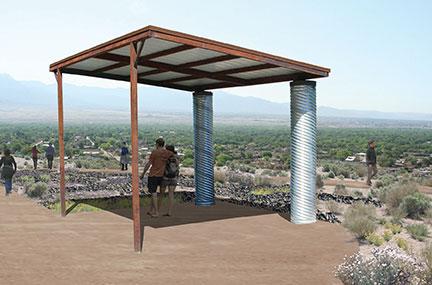 A hill no one seemed to be able to use is becoming a place to learn about water harvesting, thanks to a Southern Sandoval County Arroyo Flood Control Authority project.
Walkers on Thompson Fenceline Trail just north of the trail head at Roadrunner Park, 4921 Dolores Hidalgo Drive, may have noticed a new side trail and a pattern of rocks on a hillside.
SSCAFCA Executive Engineer Charles Thomas said the organization acquired the piece of property for a diversion pipeline in the 1990s, but the pipeline ended up being built on another route. Hillside land isn’t normally useful for flood control.
Thomas said neither the Village of Corrales nor the City of Rio Rancho had a use for the property. So, SSCAFCA employees decided to use the land to show people how to make the best use of rainwater.
“Give how infrequent our rainfall is around here, water harvesting is something we encourage,” he said.
The project idea started developing several years ago, and a landscape architecture intern worked on renderings. Now, those ideas are coming to fruition.
The SSCAFCA maintenance crew is doing the work, with the operating budget paying for $40,000-50,000 of materials, Thomas said.
Since the project area is over a rise east of the main path, workers put in a new crusher fine trail to lead people to the spot. Thomas said the crusher fine (i.e., finely crushed rocks) allows rainwater to absorb into the ground, minimizing runoff.
A shade structure will channel rainwater into a “waffle garden,” composed of native cacti and wildflowers growing among rocks. Water from the immediate surroundings will also funnel into the waffle garden.
Thomas plans to install informational signs and benches looking east toward the Sandia Mountains.
“I think it’ll be an awesome place to watch balloons,” he added.
Thomas hopes the educational site will be done in about a month.

A “waffle garden” that uses rocks to concentrate rainwater around native plants is part of the water-harvesting educational site SSCAFCA is building just off Thompson Fenceline Trail. Gary Herron photo. 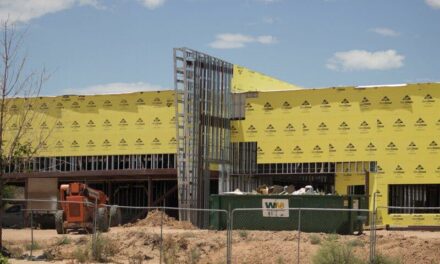 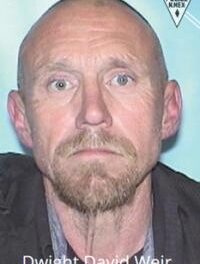