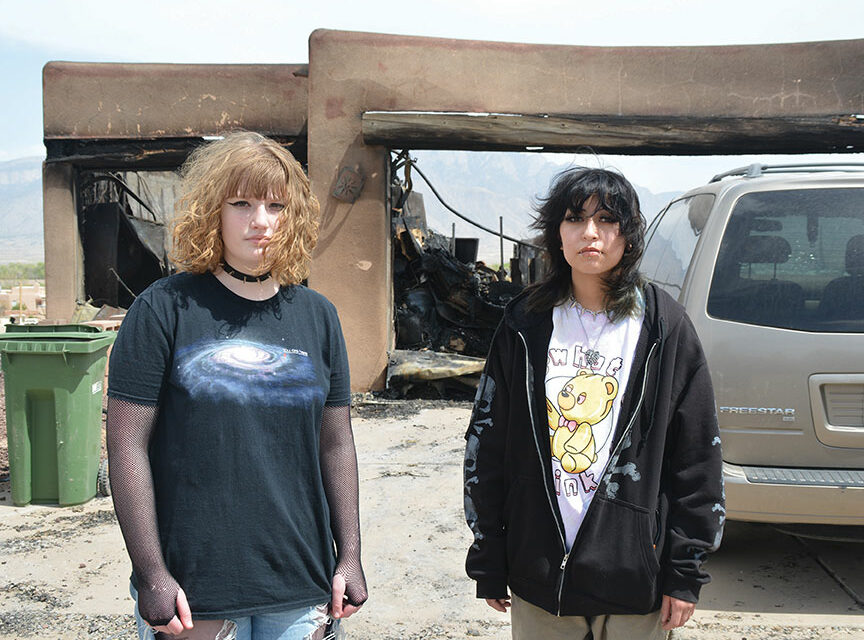 Cleveland High School seniors Sophie Shurter, left, and Brooke “Cue” Curley in front of the ruins of a home on Rio Ruidoso Road where they helped the residents escape during a fire April 22. (Argen Marie Duncan / Observer)

My dad started crying on the phone when I told him, but I didn’t think it was that big of a deal, to be honest — Brooke ‘Cue’ Curley

Ditching class led not to getting in trouble, but to saving a life for two Cleveland High School seniors April 22.

That afternoon a fire destroyed a home on Rio Ruidoso Road. The senior-citizen residents, Mary and Al McCoy, were left homeless with smoke inhalation and minor burns. Al was hospitalized.

It could have been worse if Sophie Shurter, 17, and Brooke “Cue” Curley, 18, hadn’t heard Mary’s calls and helped Al out of the burning house.

Shurter and Curley skipped their last classes that Friday and went to Shurter’s home on Rio Vista Drive.

Shurter said they noticed faint black smoke coming from behind her house. Curley asked Shurter if she wanted to see what was happening.

“If she didn’t ask if I wanted to go look, he would be dead,” Shurter said.

They walked down the road and discovered the McCoys’ house burning. Shurter called her father, Tony, who was barefoot and in pajamas before his night shift.

He called 911, put on shoes and headed over.

Meanwhile, in front of the McCoy’s house, Curley and Shurter heard a faint cry of “help” over the noise of the high winds. They found Mary just outside the front door, in a courtyard. She told them her dog and husband were still inside.

The girls found Al standing semi-conscious just inside the door. Shurter linked her arm through one of his, Curley draped one of Al’s arms over her shoulder and they half-carried, half-led him out of the house.

“Something blew up while we were getting him out of the house,” Shurter said.

They never saw or heard the dog, which died in the fire.

Curley and Shurter said it never occurred to them not to help.

“It feels really surreal, thinking if we were just a minute or two slower, we probably could have gotten hurt, too,” Shurter said.

Other neighbors and ambulances began to arrive shortly after they moved away from the house. Tony Shurter said by the time he reached the driveway, still in pajamas, the home was engulfed in flames.

The McCoys’ home was a complete loss.

“It happened really fast,” she said.

Shurter said she thought inhaling the smoke and whatever chemicals may have been it was still affecting her several days later.

Neighbors said that, as of Tuesday, Al was hospitalized and intubated with breathing problems from the fire.

“I just wish immediately he was OK,” Shurter said.

Rio Rancho, Corrales and Sandoval County firefighters set up a water-tender shuttle system in the hydrant-lacking neighborhood and battled the flames in 45 mph winds. They contained the fire to the single house and saved the threatened home next door, although it suffered some exterior damage from the heat and smoke.

Both girls said it was sad the McCoys lost their home and everything in it. The house burned so completely “that everything looks like trash when it’s (actually) memories,” Shurter said.

She had to evacuate her home because of the fire danger. She said she yelled at the police officer escorting her for being too loud while she was searching the house for her cat, and then was sorry for it.

She met her mother at a nearby gas station with the family cat and dog in her car.

Curley went to work tired after the incident, and none of her co-workers believed her story.

“My dad started crying on the phone when I told him, but I didn’t think it was that big of a deal, to be honest,” she said.

“She really responds to people in need,” Kylee Shurter said of her daughter.

Tony Shurter said helping Al out of the house was probably one of Sophie’s biggest life events so far.

He’s proud of Sophie and pleased her accomplishment was more lasting than many high school achievements.

A house fire took everything Mary and Al McCoy owned April 22, but their community immediately started trying to replace some of what they’d lost.

Neighbors Amy Fletcher and Kailee Hicks ran a donation drive, with both Turtle Mountain Brewing Co. restaurants serving as drop-off locations, to collect clothes, gift cards and money for Mary, age 77. Al, 85, was hospitalized and intubated due to respiratory problems from smoke inhalation.

An online signup form had almost every item accounted for Monday. Fletcher said Lynley York of Corrales gave Mary a temporary place to stay in her rental home.

Thursday, Fletcher said the McCoys’ insurance began paying out and the company was helping with housing, so Mary didn’t need any more donations.

“Thank you to everyone wanting to help and donate!” Fletcher posted on Facebook earlier in the week. “I know they appreciate it more than you know. And a huge thank you to Kailee Hicks for getting this going and being amazing!” 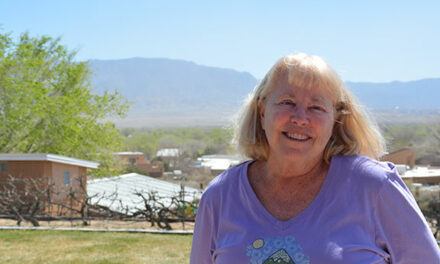 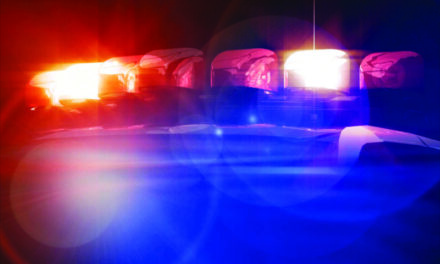