Senior Josh Perry had the company answer when asked what was a bigger thrill, being named Homecoming king or scoring three touchdowns: “A Stormcoming victory, for sure.”
Perry finished with close to 250 rushing yards, with TD runs of 1, 7 and 2 yards, all in the first half.
Nic Trujillo, a prince on the Homecoming court, caught touchdown passes of 6 and 15 yards from senior quarterback Evan Wysong, as the Storm built a commanding 33-13 halftime lead.
It wasn’t a “perfect Storm” performance; Wysong tossed an interception and Cleveland fumbled a handoff between Wysong and Perry. But the Storm defense picked off two first-half passes and turned back a late second-quarter drive inside the red zone.
Artesia’s second TD, which briefly reduced the CHS lead to 27-13, came on a 90-plus kickoff return off the vaunted “Starburst” return, which the Storm had refused to give a chance, not kicking the ball deep until it had a three-TD lead.
The Storm took the second-half kickoff and two plays later, Wysong found Trujillo open in the middle of the field; one quick cut to his right and Trujillo had his third TD of the game, this time on a 46-yard TD pass.
Continuing what seemed to be trading touchdowns, after another Artesia touchdown, the Storm got another TD pass from Wysong, this time a 23-yarder to Zachary Beranek.
That trend continued till the game ended, with Wysong sprinting 37 yards for his team’s seventh touchdown, and after Beranek’s score, Harris Bueha — the only non-senior to score points — scored the final TD of the game on an 8-yard run.
Jeff Bem kicked six PATs. Perry scored a 2-point conversion, as did Bueha.
Suffice it to say, Perry’s success, nor Wysong — he rushed for more than 100 yards — would have been possible without the stout offensive line.
That quintet is made up of left tackle Carlos Barela, left guard Mason Jones, center Ben Linfoot, right guard Gabriel Marquez and right tackle Emanuel Negreiros.
Defensively, the Storm had their hands full as Bulldogs quarterback Nye Estrada — wearing a traditionally non-quarterback number, 39 — attempted just over five-dozen passes.
Three were TD passes; three were intercepted at various times by CHS’s Psalmon Kegler, Jaden Davis and Devonte Shendo.

STORM WARNINGS: Las Cruces — the trip or the team — proved to be no problem for the No. 1 Storm last Saturday, a 46-3 victory at the Field of Dreams. Wysong accounted for four touchdowns — two throwing and two running; Perry scored two rushing TDs and Bueha added one; and Andres Arminian and Karter Weddle each caught a TD pass. That improved CHS’s all-time mark at the Field of Dreams to 13-0.
… The Storm head back to Texas Friday to meet Frenship High (2-1 before its game at Abilene Sept. 16) in Wolfforth. It’s the first meeting between the two teams. The Tigers are ranked 108th in Class 6A in the Lone Star State. 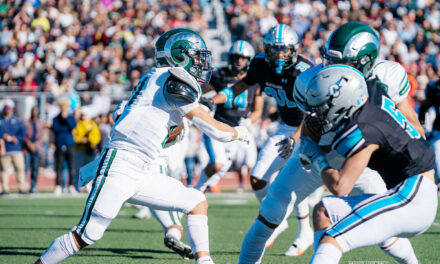 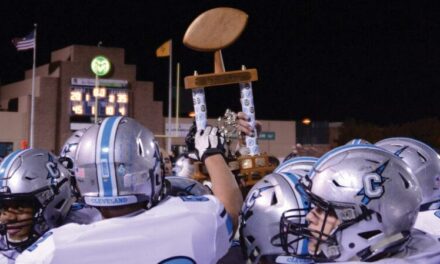