That’s what you’d have to say, as the top six teams in the latest MaxPreps Class 5A state poll wound up in the Championship and Gold brackets, as did two of 4A’s top squads: No. 1 Goddard and No. 4 Artesia.

Not surprisingly, defending 5A champ La Cueva won the Championship bracket, sweeping No. 2 Las Cruces, which had swept the Rams (7-5 before this weekend’s matches) in a semifinal.

No. 1 La Cueva beat No. 4 Centennial in the other semifinal, and the Hawks then beat the No. 6 Rams 3-1 for third place.

In the Gold bracket, No. 5 Cibola swept Cleveland for the title; Goddard swept Artesia for third. The Cougars and Storm swept their 4A foes in the Gold semis.

“What we found about this is everyone’s close to everybody else – we’re points away from each other,” Manzanares said, looking forward to the District 1-5A competition that awaits.

“In another month, stringing some points together and serving it well (will be key),” he said, not about to concede another blue trophy to unbeaten La Cueva, which has already beaten his team and the Storm this season.

The 1-5A clashes, which begin this week for his Rams and Cleveland coach Charity Gomez’s Storm, are “gonna be a battle, as they are year-in and year-out,” he said, “with us, Cleveland Cibola and Volcano Vista finding their footing.

The Rams traveled to Atrisco Heritage Academy to begin district action; the Storm were home to meet Cibola again.

“We’ve got to win our matches at home and win some on the road,” Manzanares said.

Dinks: Cleveland visits Rio Rancho Oct. 6 at 6:30 p.m. in the annual “Fight On” match, with proceeds raised through the sale of T-shirts and raffle tickets, plus sponsorship proceeds, going to help raise breast cancer awareness. Three local breast cancer patients will be honored before the match, always a good time to show support by wearing pink. “It’s an event that’s near and dear to us,” Manzanares said.

… The Rams, 15-34 all-time vs. the Storm, beat CHS in two sets of “power pool” action at Volleybash. The Rams won the teams’ first two meetings in 2021, but the Storm won both 1-5A matches. “It’s always a competitive match, pool play or match play,” Manzanares said. “We look to them being well-prepared.”

… The Rams’ Sept. 27 date at Albuquerque High wasn’t played because of an incident earlier that day that resulted in a lockdown at AHS.

… In their second trips to Rio Rancho in consecutive weekends, Goddard – the No. 1 team in Class 4A – lost to Cleveland and then Rio Rancho, both by 3-1 match scores. Artesia was swept at both City of Vision schools.

… Before their first 1-5A meeting of the season, Cleveland and Rio Rancho are in action Tuesday: The Storm (10-4) are home to meet Cibola, while the Rams (9-5) head south to Atrisco Heritage Academy. Both matches start at 6:30 p.m. 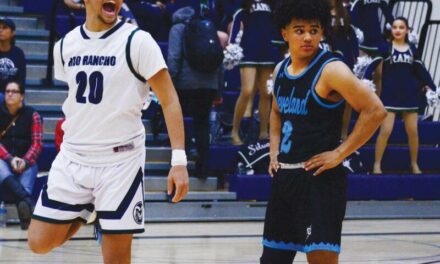