Winning at Lightning Bolt Stadium for the 18th time in their last 19 games, the Cleveland Storm got three rushing touchdowns from Josh Perry and two by quarterback Evan Wysong to beat visiting Rio Rancho 35-14 Friday night in the annual City of Vision championship game.

No problem for the No. 1 Storm, who scored the game’s final: 35 points on rushing TDs, in succession, of 45, 3 and 23 yards by Perry, followed by scoring runs of 1 and 27 yards by Wysong. Jeff Bem added five points-after.

“We’ve been in those situations; we know if we just keep doing what we do, we know it’ll eventually click,” Perry said, who missed most of last season with a broken collarbone. “I’m full-go every play.”

“We ain’t done,” first-year Storm coach Robert Garza told his players after they accepted three trophies, including the District 1-6A championship trophy. “(This) is our first goal of the year.”

It was the eighth time in a row the Storm beat their city foe, which includes state-championship showdowns in the 2019 and ’21 championship games. The last time the Rams won at Lightning Bolt Stadium was in 2016.

Perry finished with 25 carries for 220 yards, and even had a 51-yard would-be TD called back because of a holding penalty. Likewise, defensive back Andres Aguirre intercepted a JJ Arellano pass in his own end zone and returned it 103 yards for a touchdown, if a teammate hadn’t been caught holding.

The Storm were penalized more than they needed to be, while the Rams, who were flagged for more than 100 yards in penalties two weeks earlier vs. Cibola, were whistled just twice, each time in the second half, for 10 yards.

Arellano scored the Rams’ first touchdown, capping a 52-yard, 11-play drive with a 17-yard run; the Storm were penalized three times for a total of 15 yards during that drive.

In taking their 14-0 lead, the Rams had the ball at the 1 and Arellano jumped up, threw over the linemen and got the ball to Javas Maria in the back of the end zone.

Junior Noah Nelson, who lost his starting quarterback job to Arellano after an injury in the Homecoming game, had only taken a few snaps at QB the past two games, and now has a new position. He was in the secondary, and intercepted a pass; he also returned a kickoff and punted twice, which he had been doing earlier this season.

Next up for the city’s teams: A first-round bye this week for the No. 1 Storm, and a first-round game, maybe at Rio Rancho Stadium, for the Rams. Cleveland will be home for a quarterfinal game on Nov. 11.

RAMifications: Former Rio Rancho High School offensive lineman and state wrestling champion Grant Hermanns has a new address. After being on the New York Jets’ practice squad for the second year in a row, and getting into three NFL games this season, Hermanns was asked to attend workouts with Tennessee and Miami, with the Dolphins signing him to their practice squad in a contract the morning of Oct.26. Hermanns was also invited to a Raiders workout, but he canceled that after accepting the Dolphins’ offer.

… The 12-team Class 6A playoff bracket is to be released Saturday by the New Mexico Activities Association. Cleveland, No. 1 in MaxPreps and the final poll by the state coaches, and three other teams will receive a first-round bye and be home for quarterfinal games Nov. 11 or 12. The first-round games, in which the Rams will be, will be played Nov. 4 and 5 on the fields of the higher seeds. Playoff tickets are only available online (nmact.org).

… Observer fumble. In a photo in the Oct. 20 edition of the Observer, a Cleveland High player’s name was incorrect; it should have been Brendan Cochrane. The Observer is sorry for the typo and any confusion it may have caused. 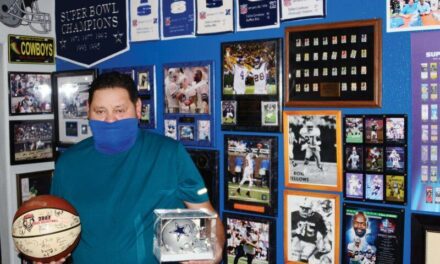