Cleveland made sure Atrisco Heritage Academy never had a chance to get out of first gear, rolling to a mercy-rule shortened 54-0 victory over the Jaguars at Nusenda Community Stadium on Friday night.

Facing an opponent that had already scored 50 or more points on four separate occasions, Cleveland (6-2, 2-0 1-6A) throttled Atrisco at every turn, limiting the Jaguars to 89 yards of total offense in a game that ended at the 4:00 mark of the third quarter. Storm coach Robert Garza couldn’t help but notice the carnage West Mesa wreaked on the defense of fellow Class 6A title hopeful La Cueva one night prior in an 89-62 Bears victory that set a single-game New Mexico record for total points in an 11-man game.

“As soon as we saw the (La Cueva-West Mesa) score last night, (we said) this can’t happen to us,” Garza said. “We had a good week of practice. We had a bye week last week, so we were pretty hungry to get back on the field.”

The Storm left no doubt as to which was the superior team by instituting a running clock with a 35-point first quarter that featured three touchdown passes by senior quarterback Evan Wysong. The highlight of those was a 55-yard bomb that hit Nic Trujillo in stride to give Cleveland a 28-0 lead.

“It was nice,” Garza said of the throw. “I don’t know if it was the prettiest of the season, but it was a good one.”

Meawhile, the Jaguars (5-4, 0-3) struggled to generate any meaningful offense while rotating three quarterbacks under center. All of them — Dean Marquez, Manny Sedillo and Landon Griego — combined to complete just eight of 29 attempts while being consistently harassed by the Cleveland front.

Meanwhile, a Marquez interception gave the Storm a short field to help set up their third touchdown of the opening period.

“We flew around,” Garza said. “We didn’t miss many tackles. That’s kind of been something that’s the past few game we’ve had an issue with.”

The Jaguars didn’t help their cause on special teams, as a pair of fumbled snaps on punts provided Cleveland with prime field position, while a long punt return in the second half set the stage for Harris Bueha’s game-ending 4-yard scoring run. It was about as complete a performance as Garza could have wanted.

“They’ve (Atrisco) been scoring a lot of points this year,” Garza said. “We’ve been harping at our defense. We’ve got to tackle, we’ve got to be better defensively. I’m not completely surprised because I know what our defense is capable of. But on the other hand, it was a great performance by those guys.”

The Storm are now 6-0 all-time vs. the Jaguars, with three shutouts.

Faltering Cougars on deck for Storm

There was a time when you could say “42-28” to former Storm head coach Heath Ridenour and he’d know what you were talking about: The Storm’s loss to the Cougars in the 2014 first round. But all-time, Cleveland holds an 11-2 edge over Cibola, with six wins in a row since that postseason setback.

The Cougars will probably be rotating two quarterbacks Friday when they host the Storm at 7 at Nusenda Community Stadium, as they did in their 35-7 loss at Rio Rancho Fiday night. 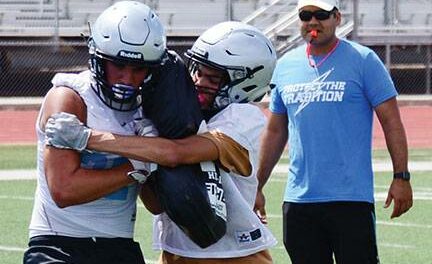 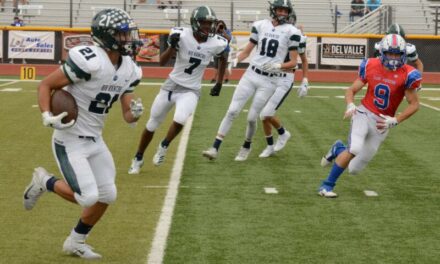