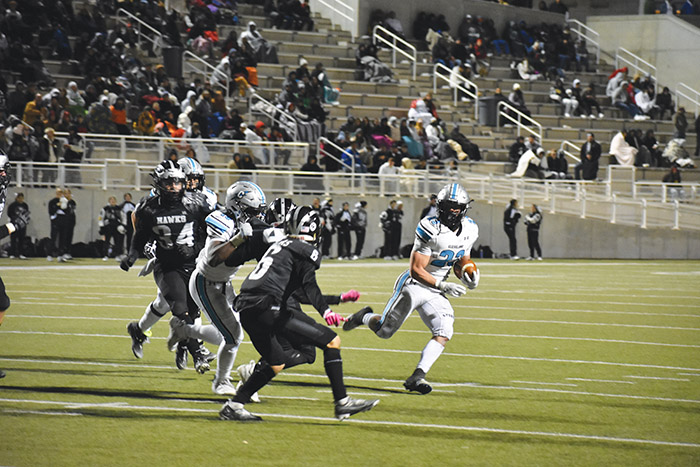 At first, it wasn’t easy sledding, but on a cold night at Community Stadium, the Cleveland Storm (10-2), led by first-year head coach Robert Garza, caught fire, and never looked back.

“We knew it was going to be a battle, Volcano is a really good football team,” Garza said. “We knew we had to answer the challenge.”

Cleveland scored 34 unanswered points on the Volcano Vista Hawks (10-3), and punched their ticket to fight for another football state championship.

The Storm were down 13-17 at the half — a true chess match between the coaches.

In fact, there were four lead changes at the half.

Volcano Vista quarterback Elliot Paskett-Bell had some big-time throws and scrambles to put the Hawks up early. 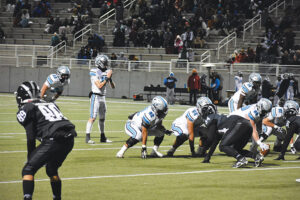 Cleveland quarterback Evan Wysong gets ready to take the snap from the Pistol. Wysong suffered a lower leg injury ealy but finished the game with two rushing touchdowns. (Daniel Zuniga/for the Observer)

However, Cleveland’s strong rushing attack proved to be too much for Volcano Vista as Cleveland finished with seven rushing touchdowns.

Cleveland running back Josh Perry had a huge night with five rushing touchdowns, and over 290 rushing yards including a 53-yard dash to the endzone.

During their regular season matchup, Perry put up a five-touchdown effort as well. For the two times Cleveland has played  against Volcano Vista, Josh Perry has scored 10 touchdowns, and rushed for over 500 yards.

Perry is scary good, and when he’s playing exceptionally, you can’t give Cleveland extra possessions.

Volcano Vista had multiple miscues throughout the game that proved to be costly including an interception in the red zone, a couple of horse collar tackles to extend drives, and a chop block that wiped a Tristen Cordova kickoff return touchdown.

Wysong suffered a lower leg injury early in the first quarter. He continued to play, and contributed big. However, Cleveland fans are hoping their star quarterback won’t have any setbacks come championship time.

Cleveland will wait for the results of the La Cueva-Centennial game, but either way it will be a rematch.

During the season, Cleveland handed La Cueva their only loss, and fell on opening night to Centennial.

If Cleveland plays Centennial, then the game will be on Cleveland’s home turf, Thunderbolt Stadium.

If Cleveland plays La Cueva, the game will be at Wilson Stadium.