Due to the shortage of umpires, the host Storm (11-3) opened their tourney Tuesday with a hard-fought 3-2 victory over Valley High. There’s another game being held today (March 23), when Manzano faces the Storm (originally it was supposed to be Cibola) at 5 p.m.
Game times Friday and Saturday, when all three softball fields at the Shockyards will be used, are 9 and 11 a.m., and 1 and 3 p.m.
The Storm’s other games during the tournament, each on the varsity field, are: Friday at at 3 vs. Roswell; and Saturday at 3 vs. Farmington.
To determine a tourney champ, a points system is in place.
The price of admission is $10 for adults and $5 for students in grades K-12. Tournament passes are available for $15. Fans should park on the east side of campus, east of the baseball diamond.

The Rams’ tournament has a bracket format, rather than the round-robin format at Cleveland.
Rio Rancho (6-5), coming off its Metro title after a win at Cleveland Saturday morning, opens the tourney Thursday at 2 p.m. vs. Robertson, and that game’s winner meets Taos Friday morning at 8.
All four of the softball diamonds at the Eagle Ridge softball complex will be used for the heavy slate of games, played Friday at 8 and 10 a.m., noon, 2 and 4 p.m. Saturday’s championship game is slated for 2 p.m.
(See the bracket at rrps.net.)
Admission prices are $6 for adults and $4 for students each day.

Avi Fierro delivers a pitch and the Cleveland Classic gets underway Tuesday afternoon at the Shockyards. (Herron photo) 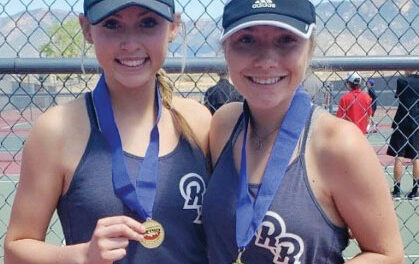