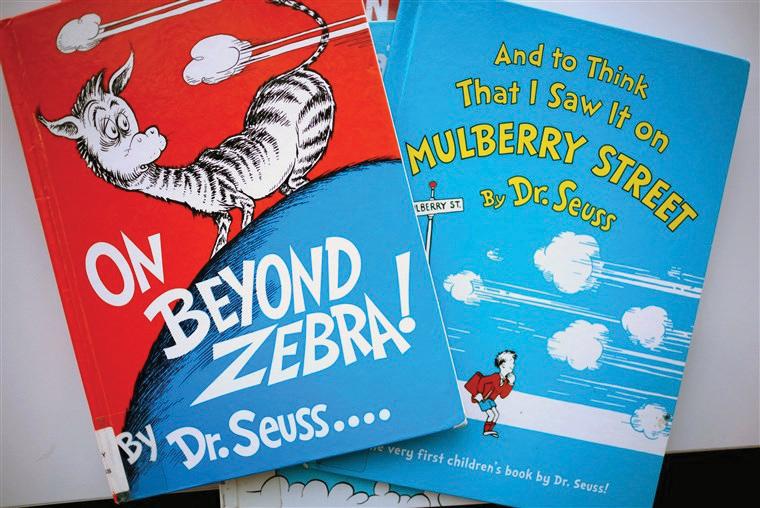 I don’t think I read any of the recently “pulled from publishing” Dr. Seuss books to my kids when they were growing up, although I confess I did read some of the good doctor’s works to them.

I’m pretty sure “The Cat in the Hat” and “Hop on Pop” were their favorites back in those days, the 1980s.

In case you missed it — and no, it’s not a Joe Biden directive — six Dr. Seuss books will no longer be published because of “racist and insensitive” imagery, according to the business that preserves and protects the famed children’s author’s legacy.

“These books portray people in ways that are hurtful and wrong,” Dr. Seuss Enterprises said in a statement coinciding with the late author’s birthday, and “Ceasing sales of these books is only part of our commitment and our broader plan to ensure Dr. Seuss Enterprises’ catalog represents and supports all communities and families.”

The decision to cease publication and sales of those books was made last year after months of discussion within the company, which was founded by Seuss’s family.

The banned six are “And to Think That I Saw It on Mulberry Street,” “If I Ran the Zoo,” “McElligot’s Pool,” “On Beyond Zebra!” “Scrambled Eggs Super!” and “The Cat’s Quizzer.”

Here are a couple reasons for the decision: In “And to Think That I Saw It on Mulberry Street” — his first book, written in 1937 — an Asian person is portrayed wearing a conical hat, holding chopsticks, and eating from a bowl; “If I Ran the Zoo” includes a drawing of bare-footed African men wearing grass skirts with their hair tied above their heads.

“’To Think That I Saw It on Mulberry Street’ was my first favorite book when I was quite young; it impressed upon me the joy of the human imagination,” said Anne Goodman, a volunteer at the FriendShop in Rio Rancho. “I’m sure there are plenty of other books now that accomplish the same goal.”

Added another FriendShop volunteer, Angie Adams, the former librarian at Vista Grande Elementary, “Dr. Seuss is one of the most-beloved children’s authors. His books and the wonderful imaginary characters in them are treasured by children everywhere.”

Realistically, Adams says, “Many of these books were published more than 60 years ago. Times have changed. We are much more aware of how racist or stereotype images and words are hurtful. We have grown; our values have changed. Books that were not offensive 60 years ago may be offensive today because social norms and values have evolved over the years. Books are trapped in the time they were written. They don’t evolve as our societal norms and values do.”

We probably should have seen this coming, after all the statues and displays that some found offensive — despite their possible historical significance — and took it upon themselves to remove or destroy.

Don’t think you can’t find the Seuss books in the City of Vision, though.

Rio Rancho’s public libraries have always offered a wide variety of materials, including those that may be viewed as unpopular or controversial. The libraries have five of the six books that are being recalled and will only take them out of circulation should they be damaged or lost. (Also see the American Library Association’s Freedom to Read statement, supported by the city’s libraries and librarians, at ala.org.)

Friends of Libraries and Literacy President Joe Driear said, “There was only one Dr. Seuss book in our children’s section (of the FriendShop), and it was not one of the six books which will not be re-published. My personal opinion is that the books were of another time, like Mark Twain’s ‘Tom Sawyer’: They should be available to readers who are mature enough to appreciate the problems with them, but they are not appropriate for today’s children’s section.”

People quickly responded on Facebook, with some posting on the Seuss website that the good doctor is rolling over in his grave, while another noted one of the books was going for $1,600 on eBay — before the auction site removed Seuss books.

Books by Theodor Seuss Geisel (1904-91) have been translated into dozens of languages, as well as in Braille, and are sold in more than 100 countries. He died in 1991, but he’s only gone, not forgotten, it seems: Forbes listed him No. 2 on its highest-paid dead celebrities of 2020, trailing only pop star Michael Jackson.

The National Education Association, which founded “Read Across America Day” in 1998 and deliberately aligned it with Geisel’s birthday, has for several years de-emphasized Seuss and encouraged a more diverse reading list for children.

You could still, as of early last week, buy Seuss books on amazon.com, which also has the perfect book (?) for kids with St. Patrick’s Day approaching: “Lucky the Farting Leprechaun,” described as “a funny kids’ picture book about a leprechaun who farts and escapes a trap.”

Insight: Do not dismiss white allies of Black Lives Matter

Letter to the Observer: Mailing out ballots is safe for voters

Letter to the Observer: GOP redistricting plans are unfair, inequitable