Something to bark about: RR residents open dog bakery 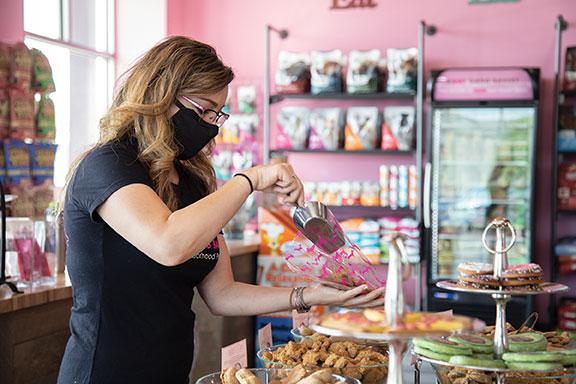 ALBUQUERQUE —Dogs are given something to drool over in Woof Gang Bakery & Grooming’s opening weeks with fresh-baked treats.

Rio Ranchoans Lucy Romero and Doug Wood are here to serve four-legged friends at their new store at 9780 Coors Blvd NW, Suite F in Albuquerque. This store has been years in the making and began with a doggie food truck called Barkley’s Bistro.

The truck was named after the couple’s late pug, Barkley. He had many food allergies, so Romero became skilled in the art of doggie-baking.

After testing her recipes, the couple opened Barkley’s Bistro food truck with great success, she said.

“We just got so busy that I needed to grow and expand,” Romero said.

The couple has three dogs: a pug named Brady, a Boston terrier named Winston and an American bulldog named Rex.

“We have always been very cautious of what we feed our dogs,” Romero said. “So we wanted to open something where we were knowledgeable in dog food, in vitamins and minerals, and just give people a place to come to have fun with their dogs and get some yummy treats and great food and some chewies, and visit our dog spa.”

Woof Gang Bakery is a franchise that has 130 locations across the U.S. Romero and Wood’s location is the first in New Mexico.

“Woof Gang Bakery offers the very best in pet care by providing quality products and grooming with a service-oriented approach. Each location is a neighborhood store committed to the well-being, health and happiness of pets,” according to the Woof Gang Bakery website.

The couple is going to re-brand the food truck to Woof Gang Bakery & Grooming.

“People love their dogs like they are their children. We have people of all ages; millennials who come in and are waiting till later in life to have children, so their dogs are their kids,” she said. “And empty-nesters, like myself and Doug, whose daughters are in their 20s and our dogs are our babies now. So you just have all ages coming in here and they just love it.”

“(Dogs) are not kept in kennels the entire time, and people absolutely love that. So we are very proud of the fact that we have one of the few cage-free waiting areas for our spa,” she said.

Romero and Wood not only have experience in the pet foods industry but also in owning a brick-and-mortar store.

“Lucy and Doug bring expertise and commitment to the well-being of their furry clientele. Both share a customer-focused business approach and enjoy meeting neighbors and their pets,” said Woof Gang Bakery spokeswoman Cara Allen.

The couple also owns the Anytime Fitness on McMahon and Unser Boulevard in northwest Albuquerque. Romero said they have owned the gym for four years and it is running like a fine-tuned machine, which allowed them to open up Woof Gang Bakery.

“So it gave us an opportunity to start a new adventure. And we have experience in business ownership and the pet industry, and brick-and-mortar, so this was just a natural next step for us,” Romero said.

Romero plans to combine fitness and pets in creating pet friendly-fitness classes like pup-palates, and doggie yoga, she said. The couple plans to expand the patio at the store to accommodate the classes.

Romero would also like to create a doggie wine and paint night, and hold specialty classes for holidays. For Mother’s Day, she would like to have dog-moms bring their furry-babies for paw stamp paintings.

“We want people to know that we encourage them to bring their dog here to sniff around, to play around and to get groomed. And this is a really fun environment,” Romero said. 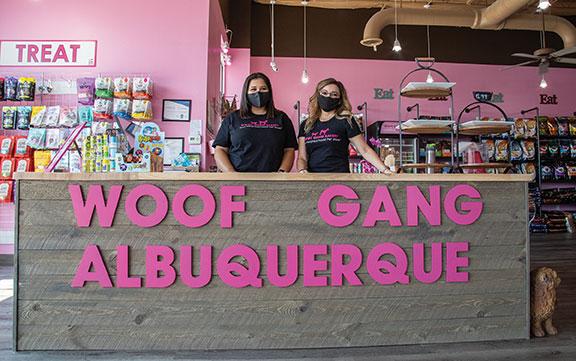 Mariah Herrera, left, calls herself the paparazzi because she takes pictures of dogs that leave the store’s spa. Lucy Romero, right, is the owner of the store. Amy Byres photo.

Fire weather
September 22, 2021, 5:44 pm
Come as close as possible to the heart of your community.
Subscribe Today!
Rio Rancho Observer