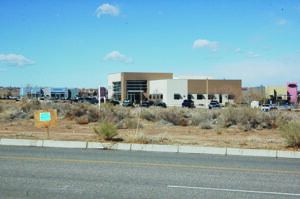 Construction to build a new chicken restaurant in Rio Rancho may begin soon.

The restaurant will be located at 1909 Wellspring Ave. near the ALON gas station.

In March, the Rio Rancho Governing Body OK’d the company’s site plan to build the restaurant.

At its May 10 meeting, the Rio Rancho Planning and Zoning Board Ok’d Slim Chickens’ request for a variance to the maximum 20-foot setback requirement. The proposed restaurant will measure 47.2 feet away from the future right of way.

The 47.2-foot distance from the right of way line will allow a drive aisle around the building to provide proper circulation around the site both for the general public, and fire and emergency needs. The company requested the variance to the front building setback to move the building further into the site by 27 feet to allow for this circulation on the property, according to a meeting packet.

Slim Chickens, a Fayetteville, Arkansas-based company, opened its first location in 2003 and has locations across 27 states and in the United Kingdom.

For more information on the company, visit slimchickens.com.