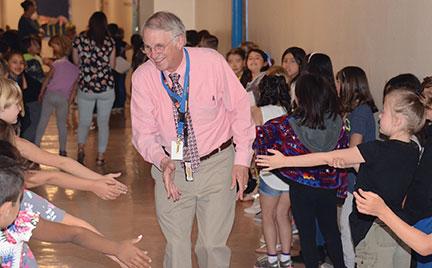 When it comes to enjoying a fabulous life, Bruce Gustin checks all the boxes.
Born in Yonkers, N.Y., the son of a chemical engineer, that’s initially the profession he planned to follow. He even got his degree at the University of Colorado in Boulder, but concerned about the evolving Cold War, he decided to enlist in the Navy in 1962.
He spent 39 years on active duty, including 18 years at sea, retiring in 2001.
“It was the right thing to do,” he said, adding that he was “pushed to retire.”
But life had a lot more than sea water for Gustin.
Last month, he completed his travels to all 50 states, checking off South Dakota.
Next year, one of his travels will take him to Greenland, his 141st country, although at age 79, he’s not sure he’ll get to all 220 or so known countries.
He’s also sailed under the equator — and literally stepped on it in Ecuador — sailed across the Arctic and Antarctic circles, was “under water for 74 days” while serving on a Naval submarine and “flew around the world in a private jet.”
Gustin is a licensed pilot and recently enjoyed a trip from Chicago to St. Louis to Kansas City and back to Chicago in a friend’s restored railroad passenger car, which he said included, “gourmet meals from the car’s tiny kitchen, including mimosas with Sunday breakfast. It was quite a trip.”
A year ago, he took a shorter trip by rails, from Albuquerque to Las Vegas, N.M., where he stayed the weekend in the restored La Castañeda Hotel. 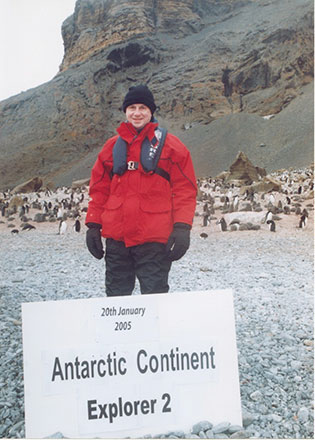 Bruce Gustin visits Antarctica, and the penguins in the background, in 2005. Courtesy photo.

This past June, Gustin posted on his Facebook page that he “flew in the cockpit of (a) Mitchell B-25 bomber … It flew combat missions over Italy during WW II. (It was) very hot and uncomfortable — it certainly gives one some appreciation for the men who flew it in 1944.”
But he’s more than an adventurer; he’s also an educator in Rio Rancho Public Schools. He relocated in New Mexico following his retirement from the Navy, because he’d once been stationed at Kirtland Air Force Base and liked the metro area.
Still working, he’s the Advancement Via Individual Determination teacher at Eagle Ridge Middle School and coordinator of the AVID program at Rio Rancho Elementary.
Getting young minds on track for successful lives after their education means a lot to him. For his efforts with AVID, he was featured in “Albuquerque The Magazine” as a Hero in Education and honored by Rio Rancho Public Schools as its district-wide Volunteer of the Year (2013-14) and by the New Mexico School Boards Association with the Excellence for Student Achievement Award (2015).
What makes this septuagenarian compelling to young teens in middle school?
“I listen to them — I think that’s what they appreciate,” he believes.
He even provides sound financial advice, having assured his own financial success beginning in the Navy — “There was no place to spend money on a submarine,” he quipped.
Here’s an example, which he provides some of his classes — each has 21 students — as the holiday season approaches: Would you rather have your parents give you $5 a day for a month, or a penny the first day and then get that doubled each day for a month?
The kids quickly figure $5 a day is the way to go.
He gives a quick math lesson and reveals a penny and the ensuing amount doubled every day results in more than $5.2 million.
In light of his military service and enviable travels, Gustin’s experiences have been enriched because of his love for education.
“I lived in libraries,” he said. “I had my first library card at 6 years old.”
Back in the 1950s, he did what most young boys did: He collected coins and stamps, and still has a great coin collection. He even had a chemistry set and “made gunpowder, blew things up.”
In junior high school, he wrestled; in high school, he ran track and cross country.
He’s more than made his mark in Rio Rancho Public Schools: A handful of years ago, he provided a $1 million endowment fund for the school district, with its annual interest providing the way, he proudly says, “to buy digital training materials” — literally the gift that keeps on giving.
This AVID gig began, he revealed, because “I wanted to make a difference for just one kid.”
That’s long been checked off. 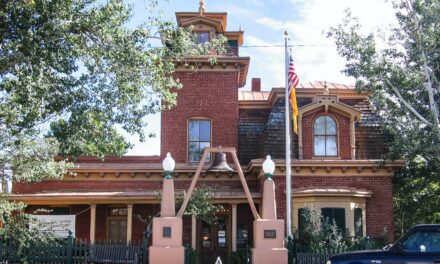 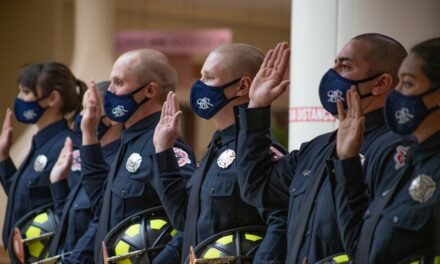 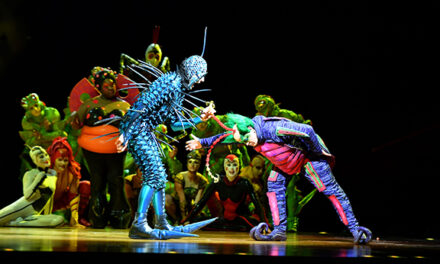