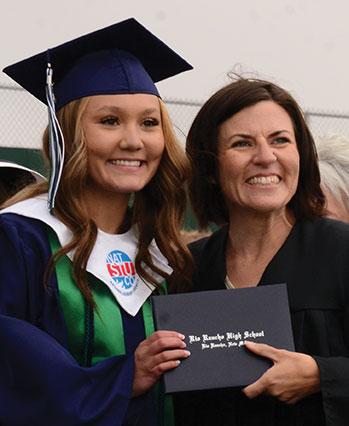 It didn’t exactly match the local weather forecast, but the nearly 500 members of the Rio Rancho High School Class of 2021 and their families have probably been in New Mexico long enough to know there’s no guarantee on weather prognostications.
And, wouldn’t you know it, about 11 a.m. Tuesday, when the first diplomas were about to be handed out, that’s when the clouds opened and the rain began pelting everyone at Rio Rancho Stadium.
The nearly 500 members of the school’s 23rd graduating class had a pleasant ceremony till then, anyway, laughing and maybe even tearing up at what they heard from the speakers.
Activities Director Bill Duncan told the crowd masks weren’t needed for those vaccinated before this “once in a lifetime moment” began for the Class of 2021. Duncan also encouraged students to yell “Rio Rancho” after his three “We are …” chants, which they did.
“You will be Rio Rancho for the rest of your life,” he told them, as his countdown to retirement resumed.
Following the presentation of the colors by the Marine Corps JROTC and playing of the national anthem, the speeches began in earnest — and may have been shorter if all of the speakers knew the rain would begin soon.
Student Body President and co-salutatorian Yuttichai Sommala told of how he dreamed of speaking at commencement since he entered kindergarten, and urged his fellow students to “embrace the random outcomes that life has in store for you” and to “let this year be an example of what you can be capable of.”
Class President Talisa Canales said time had flown by since she’d been a freshman, but in the past 15 or so months, “We were all tested by this pandemic and earned an A. … We did it.”
Adam Donaldson, co-salutatorian, apologized for not being an adept public speaker and, since he’s been playing the piano most of his life, presented a video of him playing “All of Me,” from the Piano Guys.
Sumi Shresthta, saying being the valedictorian merely meant she was “the biggest nerd on campus,” told the graduates to “keep learning and make a difference in this universe.
“Where there’s a change, there’s a challenge,” she said. “Where there’s a challenge, there’s a champion.”
History teacher Daniel Trujillo, giving the commencement address, said life’s failures may help.
“I found my passion while doing a job I hated,” he said, which turned out to be a “character builder.”
After words from RRPS Superintendent Sue Cleveland and school board President Amanda Galbraith, it was time to hand out diplomas — from Cicero A. Alaniz to Jacob W. Zirpel — with 13 Garcias and 15 Martinezes along the way.

Editor’s note: For more photos from the Rio Rancho High School commencement, pick up a copy of the May 23 Observer. For a list of graduates, thoughts from the valedictorian and salutatorians, and other graduation-related content, stop by our office at 409 NM 528, Ste. 101, for a copy of our graduation special section. 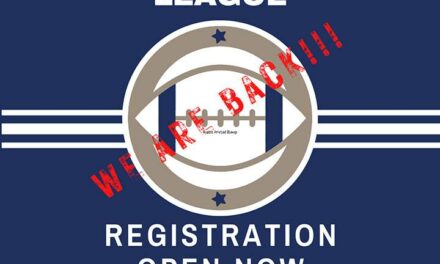 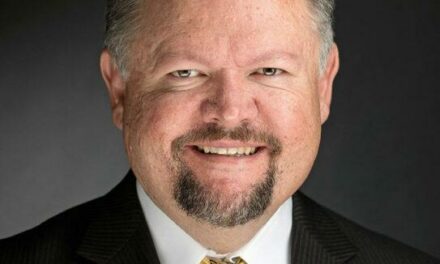 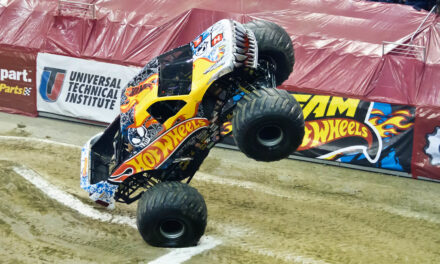