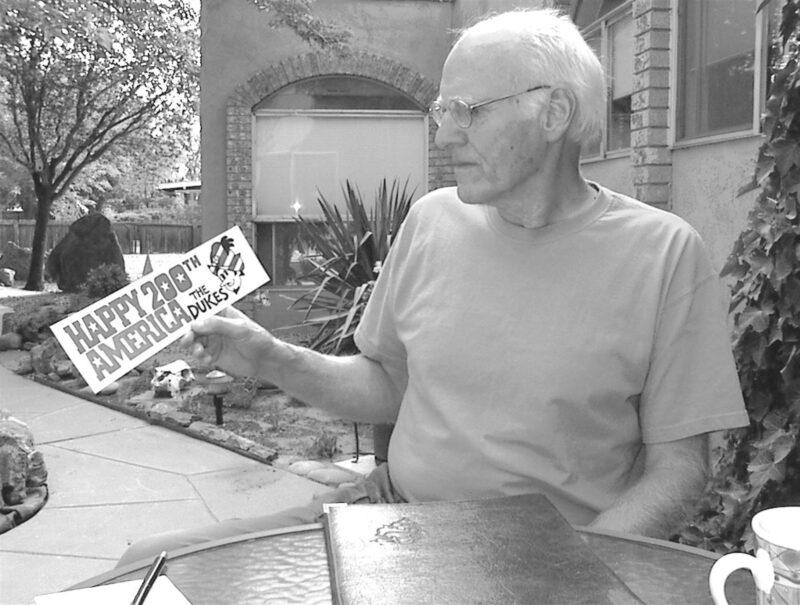 here are baseball fans in the metro area who still lament the passing of the Albuquerque Dukes, last seen playing a ballgame at the long-gone Albuquerque Sports Stadium in the late summer of 2000.

When baseball returned to the Duke City, it was in the form of the Albuquerque Isotopes, who were playing at the brand-new Isotopes Park.

That didn’t satisfy a lot of fans, though, who to this day clamor for their beloved Dukes.

It’s a good bet that a lot of those fans don’t realize Albuquerque’s minor league teams have other nicknames, too: Browns, Dons, Cardinals and Dodgers.

In fact, when the Los Angeles Dodgers’ Class AAA team in Spokane, playing in the Pacific Coast League, was being relocated to Albuquerque before the 1972 season, it was “assumed” — you know what happens when you assume — the team nickname would still be the Dodgers. After all the Albuquerque Dodgers were the city’s Class AA team, which played in the Texas League.

So when Albuquerque was elevated after the 1971 season, the city’s two newspapers (Journal and Tribune) held a name-the-team contest, allowing fans to choose between Dodgers and Dukes, Dukes won out.

So, who to turn to for an “image” of sorts for the new mascot, quickly decided upon to be a conquistador of sorts?

The job fell into the hands of Dick Moots, 82, a Rio Rancho resident and still going strong, who did a 13-minute virtual presentation recently, recalling those designing days of ’72, a mere 48 years ago.

Moots brought his family here from Chicago in 1970, with a job awaiting him at Ward Anderson Printing, which soon became Aquarius Press: “It was the ‘Age of Aquarius,'” Moots noted.

Through his new job, he met Charlie Blaney, who encouraged him to do a program cover for the 1970 season; Aquarius Press had the contract then to do that. Moots isn’t sure how valid the name-the-team contest was, as “Dukes” mysteriously overcame an early lead of the Dodgers, thanks, perhaps, to Albuquerque Tribune sports writer Carlos Salazar.

“Charlie Blaney couldn’t believe they wouldn’t pick ‘Dodgers,'” Moots recalled. “When they picked Dukes, it was already the preseason (of ’72). He said, ‘Dick, we’re going to need a logo, and we need it soon.'”

Moots, a commercial artist, came up with several sketches representing a Duke. The yellow-helmeted version got the nod. He also designed uniform lettering, program covers, schedule posters, letterhead, envelopes and business cards for staffers for the team’s first 10 seasons.

Surprisingly, Moots says on the “Drawing the Duke” video, all of the graphics were done by hand — “all pre-computer graphics,” he beams. He still has all the original artwork at his home.

He didn’t have a hand in the popular Dukes song at the time: “The Dukes are coming up … coming up swinging, hustling all the way.”

The relationship with the Dukes ended in 1980, Moots said, when the team was sold to an East Coast group and the new general manager, Pat McKernan, basically dumped Moots because he didn’t want to pay for such stuff.

Like many, Moots has fond memories of the old Sports Stadium, then a state-of-the-art ballpark with the unique distinction of having parking places beyond the outfield fence, where drivers could back in, take out their chaise lounges and watch a game.

The Dukes logo, purchased by Fred Matteucci after the Dukes moved to Portland, Ore., after the 2000 season, is still popular and often seen in the area.

“Some people actually get it tattooed on them,” Moots said.

As popular as he’s been overall, the good-natured Duke has taken a few shots over his tenure. The Journal once ran a story suggesting the logo was outdated and featuring alternative drawings.

Moots’ Dukes designs have stood the test of time. Dukes gear outsells that of some active minor league franchises and remains remarkably popular in New Mexico.

Doing the video for the Rio Rancho Parks, Recreation & Community Services Department, he said, served as “a walk down memory lane.”

You can see the video and a few other Dukes-related videos on YouTube; just type Dick Moots into the search box. 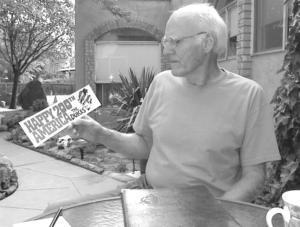 Dick Moots holds a bumper sticker from the bicentennial year of 1976, promoting the Albuquerque Dukes. 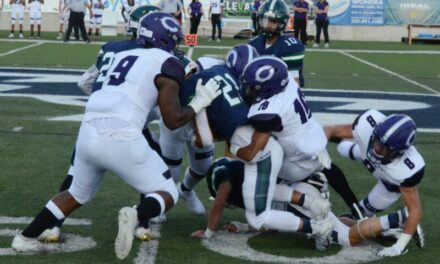