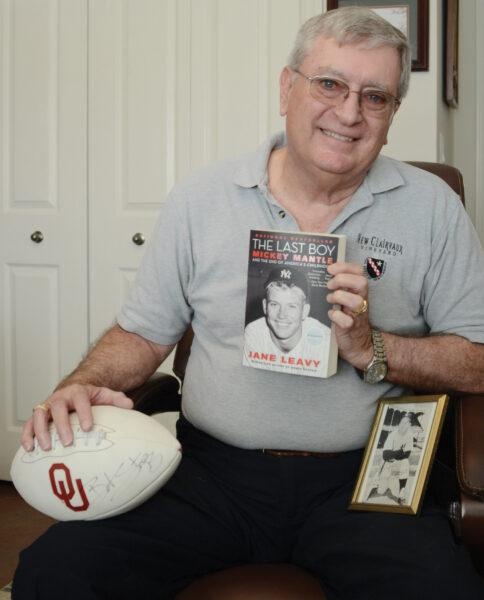 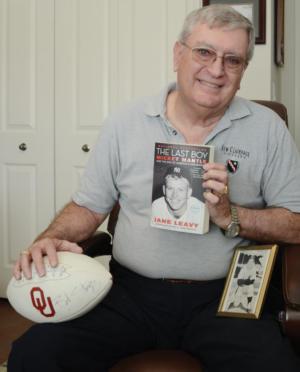 Joe Brown with some of his favorite sports memorabilia, including a photo of Mickey Mantle “The Mick” signed for him in 1962.

It’s been been almost 60 years and a lot has happened in Joe Brown’s life — namely a career in the Air Force, his passion for fast cars and Western music, which he performs, and a 50-year marriage to Linda, a lunch with Dick Clark and beers with Chuck Yeager — but a hot summer evening in Kansas City back in 1962 just can’t be forgotten.

That’s when he met his hero, Mickey Mantle.

Then 14 and playing on an American Legion baseball team in Cushing, Okla., Brown says his father came home one day to announce vacation plans: “We are going to New Orleans, but we are first going to Kansas City to see the New York Yankees play the Kansas City Athletics. Joey needs to see his baseball hero, Mickey Mantle, play at least once.”

“We arrived the day before the Yankee game and, fortunately, the weather cooled down. The four of us went to a ballgame that evening between the Athletics and the Washington Senators,” he said, impressed immediately with the stadium and a “scoreboard … bigger than any building back in Cushing.”

Once the “scouting” for the next night’s game, when the Yankees would be in town, was done, Brown’s father “went to the ticket office and purchased four seats directly across from the locker room door where the Yankees would come out to go down to the field the next evening.

“He was determined to give me every opportunity possible to see ‘The Mick’ up close and personal,” Brown recalled.

The family arrived at Municipal Stadium three hours before the first pitch, Brown remembers, and “Everything was terrific, even the smells, like the odor of buttered popcorn, grease in the wind from the hamburger vendor stalls blended with the scent of newly mown grass.

“That night I was in baseball heaven. After we bought hot dogs, peanuts and Cokes, I sat in the seat nearest the locker room door and eagerly awaited the Yankees. Hot dogs at the ballpark had never tasted so good.”

Still enjoying the ambiance, Brown remembers being startled by a movement to his right.

“To my amazement, it was my hero, Mickey Mantle. He’d stuck his head out of the locker room door. I hollered, ‘Hey, Mick, I’m an Okie.’

Mantle needed to know more: “Where’s your home? How old are you? Do you play baseball?

“I know I answered all his questions, but I can’t remember what I said,” Brown said, with icing added to his No. 7 cake: “Mickey pulled over his teammates as they came out of the locker room and introduced them to me. … That night, I met Whitey Ford, Yogi Berra, Bill Skowron, Bobby Richardson, Tony Kubek, Roger Maris and everyone else on the Yankees team.”

But that wasn’t enough: Brown told Mantle to hit a homer for him.

In the first inning, Mantle homered to left field, a ball Brown remembers to sail “as high as the monster scoreboard and landed way out in the vast parking lot. I could see the flight of the ball from where I sat and marveled at the distance the ball traveled. Mickey seemed as excited by the homer as I was. As he rounded second base, he looked directly up above third base, toward me, took his cap off and twirled it around.”

The Yankees lost the game, 7-2, so it wasn’t the perfect vacation night.

“That experience in August of 1962 ended the best summer I could have imagined,” Brown said.

“When I was 22 years old, in the sweltering summer of 1970, I had married and lived in Lubbock. I was a retail store manager and was looking in the Lubbock newspaper for the advertisement my company had placed when I saw a full-page ad about Mickey Mantle coming to Lubbock to attend the grand opening of the ‘Mickey Mantle’s Country Cooking’ restaurant in two weeks. That notice made me feel as nervous and excited as I had eight years earlier in Kansas City.

“At lunchtime on the restaurant’s opening day, I tossed my store keys to a fellow worker and said, ‘I’m going to lunch with Mickey. I’ll be back when I get here.'”

Brown took his place at the end of a long line and waited.

“Eventually, I entered the restaurant. A large table had been set up for Mickey to sit behind and sign autographs,” Brown remembered. “He smiled at everyone he met, shaking hands and making everyone feel special. I saw him being the Mickey I remembered from Kansas City. He looked up at each fan, asking their name and what they would like on the picture he was signing for them. It took another 15 or 20 minutes for me to arrive at the head of the line finally.

“When Mickey looked up at me, he gasped and did a double-take,” Brown said. “Then to my complete shock, he said, ‘Joey, how are you, and where were you after the game?’

“I wanted to say goodbye, Mickey. We waited a while, and then we had to leave. We had to go to our hotel to prepare to leave for New Orleans early the next morning.

“Mickey then said, ‘OK, now where have you been for all these years?'”

Strangely, knowing Mantle was the hero of a lot of youngsters back in the 1960s, Brown learned the Mick had a better memory than most: “It was August of 1962 in Kansas City, right?”

It turns out Mantle couldn’t forget that hot night in KC: “Joey, you had no way of knowing this, but I tried many times to hit a home run for a kid, but that night was the only time in my career I did it. That was an amazing night for me.”

Brown then got the Mick to autograph one of the handed-out photos — he still has it, of course — and turned to leave.

“Mickey said, ‘Oh no, you come back here behind the table. We have a lot of catching up to do.”

Mickey continued to sign pictures and was very nice to everyone, but for the next couple hours, Mickey and me did a lot of catching up.”

The two memorable meetings with the Mick still hold special meaning for Brown.

“What a gift it was to know that I was an individual, a person, to Mickey, and that I could be impactful to others, even my hero,” Brown explained. “As I have gone through life, I have been privileged to have many special, even unique experiences. I have also had issues arise which have challenged my confidence.

“But Mickey Mantle and baseball prepared me for ‘just about’ anything life throws at you, and for that, I am forever grateful.”