The Rio Rancho High School football team faces one of its toughest opponents of the season Friday at 7 p.m. when the La Cueva Bears visit Rio Rancho Stadium.

The Rams beat the Bears twice last season – 50-0 in La Cueva’s worst loss in school history, and 35-34 in double-overtime in a state semifinal meeting in the City of Vision.

Here are the Rams’ opponents on the ’22 schedule, along with a game-by-game look at their opponents.

La Cueva: Despite their proximity, the two schools have met only six times – and that includes a pair of Rams wins last season. The Rams are 4-0 vs. the Bears in games played at Wilson Stadium, and 1-1 in games played in the City of Vision, which includes an exciting 35-34, double-overtime win in the state semifinals last November – a game in which the Rams trailed by two TDs.

Eldorado: Although the Rams are 5-8 all-time vs. the Eagles, RRHS has won three of the last four meetings, including a 64-43 win at Rio Rancho Stadium in a 2014 semifinal. Four of EHS’s wins have been by shutout, including a 34-0 blowout ai Wilson Stadium in a 2008 quarterfinal meeting.

Eastlake: The El Paso team was 10-2 last season, playing in Class 6A. The Rams and Falcons have never met.

Organ Mountain: The Knights, from their days as Oñate High School to their days as Organ Mountain High School, have been pushovers for RRHS. The Rams are 6-0 all-time, including a 48-0 win at RRHS in the 2016 quarterfinals, and have scored no fewer than 35 points in any of those wins, while never surrendering more than 14.

Hobbs: It’s been 13 years since the Eagles faced the Rams, and RRHS fans would like to forget about that one – a 56-43 Hobbs win at RRHS in the 2009 quarterfinals. Before that, the Rams won their first meeting with the Eagles, 28-21, in a first-round playoff game in Hobbs, and then beat Hobbs in its next game, 24-20, at RRHS.

Farmington: Oddly, although the Rams have met Farmington’s new higher school, Piedra Vista, seven times and even had them as foes in District 1-6A for two seasons, they’ve never met the Scorpions – new to the Class 6A field this season — on the football field. Head coach Jeff Dalton is in his eighth season, and he got the Scorpions as far as the 5A semis last year, when they were knocked out by Artesia.

AHA: The Rams have never lost in seven meetings with the Jaguars, which includes a 50-0 whitewashing at Rio Rancho Stadium last November. Other than a 28-27 loss in a 2013 meeting, the Jaguars have never been closer than 21 points. Former Rams assistant multi-sport assistant coach Howard Knezevich is in his second season at the helm; former Ram Ryan Ortiz is on his staff.

Cibola: Except for the Rams’ 1997 debut season and the pandemic-shortened 2020 season, the Rams and Cougars have met every year, with the Rams winning the last eight and holding a decisive 18-6 margin over their rival from down the hill. After their first 10 meetings, they’d each won five times. Until Cleveland High opened in 2009, Cibola was the Rams’ main rival and the team RRHS has played more than any other.

Volcano Vista: The Rams are 10-3 all-time vs. the Hawks, with two memorable meetings occurring in the 2019 season. Volcano Vista beat the Rams 51-43 in the regular season, en route to getting the No. 1 seed for the postseason – only to have QB Isaiah Chavez and the Rams stealing their championship dreams, 48-30, in a semifinal game, also played at Nusenda Community Stadium. Zach Vigil and Chavez each scored three times in that game, which sent the Rams home to play Cleveland for the 6A title seven days later.

Cleveland: The Rams have lost the last seven times they’ve met the Storm, and that includes the last two championship games: 48-40 at Rio Rancho Stadium in 2019, 35-14 at Thunderbolt Stadium last season. The Rams, like VVHS, had a 20-0 lead over the Storm last season, only to lose 28-27.  All-time, the Rams are 4-12 vs. the Storm, with three losses in the 2021 calendar year. Oddly, for seven seasons in a row (2011-17), the visiting team won each time in the regular season.

Regardless of the month on the calendar, basketball is going on in Rio Rancho 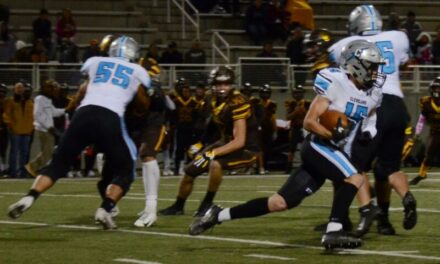 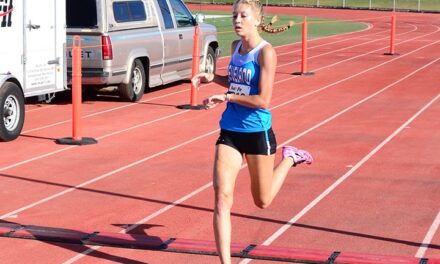