The biggest changes in coaching positions at Rio Rancho High School are taking place between the 2021-22 and 2022-23 school years.

Some of it was necessitated by the retirement of Athletic Director Vince Metzgar.

Metzgar was replaced by Sal Gonzales, the cross country as well as boys track & field coach, so that opened two coaching positions.

The spring resignation of two-year football coach Gerry Pannoni, which followed the death of his wife and his subsequent move back to the East Coast, opened that post, which was taken by Nate Pino, who had been the Rams’ girls track & field coach – which meant another position was open.

And when Uwe Balzis, one of four –believe it or not – coaches at RRHS since Day 1, decided to resign, at least until he is eligible to return to that position, his job as RRHS girls soccer coach became available.

The Observer has run features on Gonzales, the new AD, and Pino, the new football coach, as well as Mabrey.

What do you “demand” from your student-athletes? I demand their best effort. If they aren’t willing to give that I just can’t work with them.

How can you make them better runners, jumpers and throwers and improve their times/distances? We focus on technique, rest and recovery. Rested athletes perform at their best.

What do you think — or hope — other track coaches in the Metro say about you? This question makes me laugh. I don’t really worry about what other coaches think about me. I can only focus on my group of athletes. I do think that I’m well respected.

How can you make running a fun activity for kids? I always tell new kids to give me five days and if they hate it at least they gave it a shot. We have a lot of fun at practice. There’s a lot more to running fast times than people really think, so the kids are really focused on what we are learning. We listen to music a lot as well. That keeps them engaged and excited. I also make sure to structure practice so they (sprinters) are not running for days on end. I like to get the job done quickly and get them home to work on the academics. That’s not saying we won’t work hard.

Are you known as a coach who “shares” his athletes with other sports’ coaches?

I encourage every athlete to compete in another sport. Kids benefit from the competition, and the fitness they bring back is worth it. I also coach football, so I’m not available to train a specialist throughout the fall.

Do you take time to help your student-athletes get attention from college coaches? I do work for the kids when it comes to getting into college. I will contact coaches for them, but I try to teach them how to do it on their own. I’m not just focused on getting them to run or throw at the next level, if they just want to go to college, I have helped them there as well.

Is there a slogan you will be using, either for your debut season with the Rams or maybe longer? I’ve never been huge on slogans. I have a quote of the week that usually conveys the “theme” of that particular week.

Do you anticipate any changes in the program this season? The only change I see this year is to help them develop in all aspects of the games, not just the play. It has been a struggle the past few years with everything that has happened. I would like to get the excitement back in the players.

What do you think — or hope — other track coaches in the Metro who know you say about you? I would hope that the other coaches that have known me for a while would say I care for my players more than the outcome of the game.

Do you take time to help your student-athletes get attention from college coaches? If an athletic student would like to talk about college, I am always available to help guide them.

Is there a slogan you will be using, either for your debut season with the Rams or maybe longer? There are two slogans that we will be using” “You will get out of your high school experience what you put into it” and “The only thing you have total control over is your fitness.”

What do you “demand” from your student-athletes? Demanding doesn’t often give the results one wants. I intend to encourage and set expectations for each individual to do the best she is capable of performing. I’d like to challenge my student-athletes to work on their character every day. This may look like keeping a positive attitude, respecting the sport, being respectful to others, being a good teammate, constantly practicing communication skills, and putting in quality work at practice.

How can you make them better runners, jumpers and throwers and improve their times/distances? I will contribute to establishing a quality workout program with other coaches to make our student-athletes better. Perhaps more importantly, help student-athletes develop self-discipline that they will need outside of practice and to establish lifelong goals.

How can you make running a fun activity for kids? I want to make running/field events fun for kids by helping them develop personal goals and team goals. When establishing goals for yourself, you experience a personal challenge that intrinsically motivates you. Also, bringing a community together to strive towards a common goal enhances the experience and camaraderie of track and field. Finally, I want to emphasize that individual contribution leads to team success. A team win is always fun!

What were your Rams highlights? (Gonzales played soccer and was a track athlete during his time as an RRHS student-athlete) As a Ram, I had many highlights that were in my experiences of soccer and track and field. Soccer was my first experience where I felt part of an athletic community. I still keep in touch with the relationships I made years later. In track and field, my highlights were being recognized as a valuable member on the 4×400 relay team, winning the district championship in the 800, and breaking the school record in the 800 at that time.

Will you be known as a coach who “shares” his athletes with other sports’ coaches? Absolutely! I want the RRHS athletic community to know that I am a coach that would “share” athletes in the sense that I am flexible and willing to work with multi-sport athletes and their schedules. I believe it is essential for student-athletes at the high school level to get as much experience as they can in all sports, as it can generate more options in their future. For me, I initially started out as a soccer player, but track and field positively changed the course of my life.  I think Nate Pino, the former girls head coach, did a great job working with student-athletes who did multiple sports and I plan to follow the same coaching philosophy.

Is there a slogan you will be using, either for your debut season with the Rams or maybe longer? At this time, I think it would be a great idea to allow each year’s team to determine their own slogan.

How does teaching psychology help you be a better coach? I have found that my psychology background has helped my teaching and interpersonal relationships. I know it will be an asset to my coaching.

What do you “demand” from your student-athletes? What I expect from my athletes is to be at practice every day, work hard and stay positive.  Other little things like listening, being a good teammate, juniors and seniors taking a leadership role within the team all eventually add up to become big things.

How can you make them better runners, and decrease their times? Realistically, it is up to them to improve. I say this because in cross country, summer running and effort are so important. Student-athletes that make the choice to run daily in the summer and put forth effort in everything they do end up being successful. Saying that, I take a methodical approach to training and progressively build athletes up to run more, run longer, and run faster.

What do you think — or hope — other cross country coaches in the Metro say about you? Currently, I think many of them know me from my time at East Mountain High School and know that for the eight years I was there, we had one of the best distance programs in the state. Dave Naylor (A.D. and head cross country coach at the time) and I worked in tandem to train some pretty-talented athletes, who all saw a ton of success.  We also worked to have the best-behaved team as well.

Although I can be laid back, when it is “go” time, my competitive side comes out and some may see me as the coach who gets to the most spots on the cross country course during a race.

How can you make running a fun activity for kids? I do a couple things. First off, I push the fact that we are a team. From our top runners trying to be All-State and get college scholarships to the last boy or girl just trying to finish the 5K distance, we are a team. We support each other 100 percent and are our best cheerleaders. Second, I strongly encourage the juniors and seniors to take on leadership roles.  Our best teams at EMHS had the best team leaders. Lastly, we try to add things to practice and after practice. I’ve heard of a grueling run that we have to do and time as an RRHS tradition. I challenged the leaders to plan after practice activities for everyone on the team. All this adds up to create an atmosphere of hard work, fun and respect.

Are you known as a coach who “shares” his athletes with other sports’ coaches? Yes. I’ve coached state track and field champions who played other sports at EMHS and see the value in it greatly. Often the most competitive athletes you have are those that play other team sports and they bring that competitive edge to the distance crew.

Do you take time to help your student-athletes get attention from college coaches? For those wanting to run in college, I let them decide how much help they want from me.  Having coached collegiately for five years, I understand the process. At EMHS, a school of 370 students, we had a year where we had six athletes running in college, which is pretty good for our small school. A few of those athletes wanted me involved and I was able to make some connections for them while others wanted to figure it out on their own. I’m there for my athletes in whatever capacity they need me.

Is there a slogan you will be using, either for your debut season with the Rams or maybe longer? As far as a slogan for this year, I’m going with “BETTER EVERYDAY.” I want my student-athletes to ask themselves, “Did I get better today?” 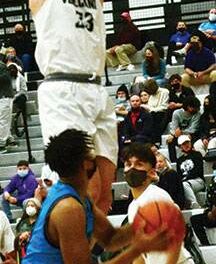