Rio Rancho has a variety of traditional martial arts schools 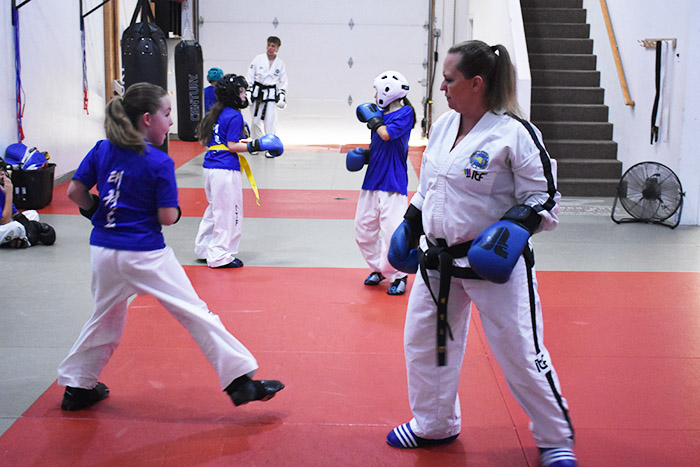 The goal of karate is not to go after someone, but to develop a well-balanced mind and body — Kim Jin

In Rio Rancho, martial arts are alive and well. They’re many forms available for people of all ages. Each offering their own unique ways of instruction, and discipline.

One stop took me to Rio Rancho’s Humble Warrior Taekwondo which, you guessed it, teaches traditional Taekwondo-Do.

“It started, officially, in 1955 by General Choi Hong-hi,” said Weaver. “ITF taekwondo is regulated internationally so everyone is taught the same.”

Tae-kwon-Do literally translates to “kicking,” ”punching” and “the way.”

Taekwondo has been taught the same way for generations, that way everything is done to the most efficient use, and to avoid injuries.

“And a lot of it is to protect your body,” Weaver said. “So, if you do blocks and they are outside your shoulder line then you’re messing up your shoulder.”

Weaver is a retired police officer, and her goals go beyond martial arts.

““I am not going to teach kids how to do damage to people, and then not give them a moral compass,” she said.  “We expect courtesy, integrity, perseverance, self-control, and an indomitable spirit…In addition to that we get to kick and punch each other,” she added.

Humble Warrior Taekwondo is owned by Weaver. She leads the school with 6th degree black belt Tony Parris. Click here to get to their website. 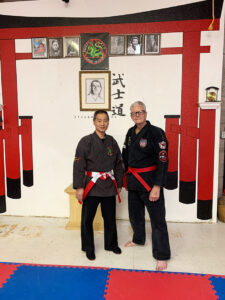 “I have over 40 years of training, so I incorporate a lot of what I learned along the way,” said Jin.

That’s a lot of experience.

Jin’s martial arts journey has taken him to Okinawa [Japan], Korea, The Philippines, Australia, and, of course, the United States. Jin has studied karate, judo, Japanese jiu jitsu, and Kyusho jiu jitsu — to name a few.

“Kyusho is dealing with pressure points, “Jin said. “I am temporarily disabling a person to eliminate the momentum of a fight.”

Jin’s journey started in 1980 when he got jumped by five classmates.

After the incident, Jin decided to learn karate. He was turned down by the dojo’s instructor, and acknowledges that he had the completely wrong mindset when he was younger.

However, his cousin, who was a part of the dojo, taught him karate without his instructor’s permission (which is frowned upon in karate dojos).

Eventually, he was allowed to train in the dojo, and was awarded his black belt in 1986.

“I teach these kids what they need to learn; the ethical guidelines… don’t take the matter into your own hands,” he said. “This is more of learning to walk away, but should you have to do this [fight] then you have the tools necessary to defend yourself properly.”

“If you don’t have any respect, then you’re going to learn it here,” Jin said.

Jin was a police officer for 10 years, and currently teaches the automotive program at West Mesa High School. He is passionate about education, and is far more concerned with his students learning life lessons than accolades or walking out of his dojo with a black belt.

“We have to love these kids, and care for these kids,” Jin said. “I take it very personally when I teach these kids.”

At Rio Rancho Bujinkan, the goal for students is to excel in everything outside of the dojo.

“We don’t do tournaments, we don’t do sparring,” said lead instructor and 15th dan black belt Robert Mattson. “This is for practical self-defense, and for learning focus and discipline.”

Bujinkan is an international Japanese martial art. Masaaki Hatsumi is the founder of the Bujinkan organization.

“I lived for six years in Japan training with Masaaki Hatsumi,“ Mattson said. “He’s the 34th Grandmaster of this art.”

Mattson started Bujinkan in 1984, and is the founder of Martial Arts for Education (M.A.F.ED.), a nonprofit martial arts program for school-aged children. It’s building has been sold, but the students and the school continue to practice. See its website.

“We get a lot of students with attention challenges,” he said. “The focus, the discipline, and the physical activity really helps these students begin to focus their minds and bodies.”

Mattson was a regular guest in schools throughout RRPS. The pandemic put a pause on his visits, but he hopes to be back in schools soon.

“I’m a credentialed, bilingual cross-cultural teacher, and I recognize that my martial arts background is also very important for helping students succeed in school,” Mattson said.

Before Bujinkan, Mattson was a Taekwondo-Do practitioner and worked as an educator. Mattson has over 50 years of experience in martial arts.

“We encourage students to excel in school, and to also have the confidence to avoid violence,” he said. “Our students are very good at being able to walk away from confrontations because they know through their training that they can handle themselves.”

Rio Rancho Bujinkan has been in the city since 1993, and is closing in on its 30-year anniversary. Click here to get to their website 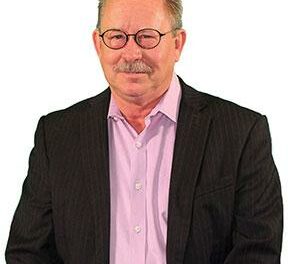