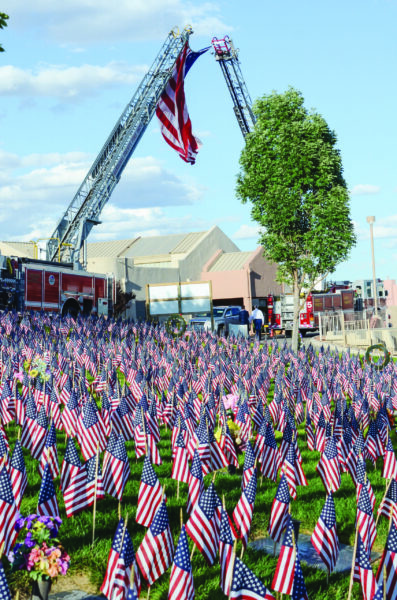 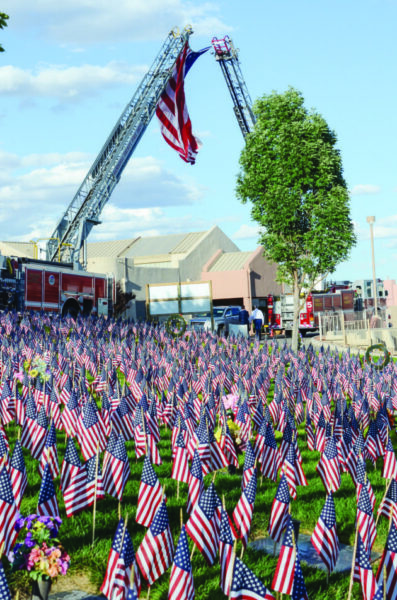 Once again, nearly 3,000 American flags — 2,996 to be exact, each commemorating a life lost that day — were planted the morning of Sept. 6, and were fluttering in a gentle breeze Wednesday evening when Vista Verde Memorial Park conducted its memorial service.

“We aren’t gonna (forget),” Vista Verde Memorial Park General Manager Eric Moen told the gathering, explaining that another 2,996 white flags in a circle each had the name of a 9/11 victim on it.

Several hundred people turned out for the hour-long service.

Included in the ceremony were the flag-raising by members of the Cleveland High JROTC, Girl Scouts from Troop 7135 leading the pledge of allegiance, Christina Kotila singing the national anthem, an invocation by Rio Rancho Police Chaplain Allen Sutton and opening remarks — and a proclamation — from Rio Rancho Mayor Gregg Hull.

Hull recalled his impressions from that fateful day 18 years ago. Typically, on his drive from his job in Albuquerque to his West Side home, he’d count the contrails in the sky. The afternoon of Sept. 11, 2001, there were no contrails.

“I knew that our nation had changed,” Hull said, but, “We are a stronger nation … because of our heroes.

Tim Robson, a member of the state’s Federal Emergency Management Agency Task Force 1, told of being deployed to the Pentagon on a C-17 to Andrews Air Force Base. He recalled thinking, upon seeing the Pentagon, “That building has a huge hole in it and we need to fix it.”

Indeed, just before 10 a.m. on Sept. 11, 2001, hijacked American Airlines Flight 77 sliced through three light poles in the Pentagon parking lot before slamming into the first floor of the building, and then exploding into a fireball. The crash instantly killed 125 people inside the building and the 64 passengers onboard, including five hijackers.

“It was a crime scene … (we had to) preserve evidence, remove debris,” he said. “Basically, five stories were unsupported” and the team shored it up using 6-inch-square, 15-foot long timbers.

“We killed quite a few forests,” he said.

Despite being hardened during his days as an Albuquerque firefighter and U.S. Marine, Robson said, “It has affected me greatly.”

Rio Rancho Fire Chief Paul Bearce agreed: “Each of us lost a portion of our lives that day,” he said, noting the deaths of 343 firefighters on 9/11.

g with the benediction. 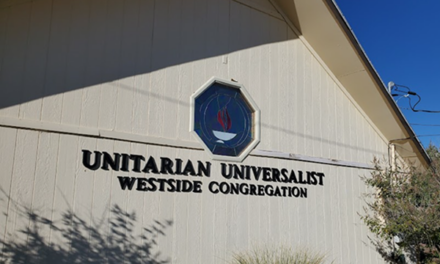