Heading into the final day of its regular season, Rio Rancho was in jeopardy of having slipped from No. 1 in the state to third place in its district, which would have happened if the Rams lost by two or more runs Friday afternoon at Volcano Vista.

Rams 8, Hawks 2: Seniors Dominick Priddy and Elijah Castañeda had other ideas, though, and combined to go 7 for 7 as the Rams bounced back from their loss to the Storm two nights earlier and claimed second place.

Castañeda drove in the Rams’ first run in the first inning; singled but was picked off first base in the third; socked a two-run homer in the fifth and singled again in the sixth, finishing with four RBIs.A

The storm nailed down the title at Rio Rancho, making whatever happened in their home finale with Atrisco Heritage Academy meaningless.

The teams combined for nine errors – five by the host Rams – and there was only one earned run scored. But the Rams left the bases loaded in the third and fifth innings, when first starter Austin Barela escaped a jam and reliever Logan Kinter – earning his second win in two days – got out of it.

“Five errors and how many men did we leave on base (10) this time?” frustrated Rams coach Ron Murphy said. “Five errors and (we) can’t hit with men on base isn’t going to win many games.”

The Rams then left two aboard in the seventh off the Storm’s third pitcher, Gavin Hoffman, who not only earned a save but stroked a two-run single in the three-run fifth that ended the scoring.

DJ Sandoval and James Brevig had the Storm’s other hits.

Castañeda had three hits, including lead-off doubles in the fifth and seventh but was left on third base when those innings ended. Ryan Casados had two hits and scored twice.

Seth Lee (3-3) pitched 4 2/3 innings and was tagged with the loss, the second time he’s lost to the Storm. He didn’t give up a hit until the fourth – Brevig’s single – and although he gave up all five runs, none was earned.

Lefty Jason Parker retired all seven batters he faced after relieving Lee, including four on strikes.

Earlier in the week:

Senior left fielder Elijah Castaneda drove in half of the Rams runs Friday.

Cleveland starter Jace Dominic and Kinter, who pitched the final two innings and got the win, each gave up two singles to the Hawks.

Dominic struck out 11 Hawks, relying on his fastball, with a velocity in the mid-80s.

The only batter he walked came around to score Volcano Vista’s first run, in the fourth, when each team scored twice. The tying run came on a double-steal, with Dominic apparently paying too much attention to a runner on first base and not the Hawk at third.

“I threw a high pitch count and went through the order three times already,” Dominic said of his departure. “We trust Kinter and he did his job.

“I was looking for a pitch that I could drive the other way,” Tyler said. “I got out front. It all worked out.”

Tyler had two hits, legging out an infield single in the fifth. DJ Sandoval and Austin Barela also had two of the Storm’s eight hits.

Rams 4, Cibola 0: While the Storm were winning on the West Side Monday afternoon, so, too, were the Rams, winning an important game at Cibola behind six no-hit innings from lefty Devon Alvarado.

Extra innings: MaxPreps has put the spotlight on 10 of the most incredible high school baseball fields in the country, and leading off a short video on its site is the Rio Rancho High School stadium. The tour includes nine other ballparks, from California to Virginia.

… Murphy notched his 14th 20-win season as the Rams’ head coach this season, which is his 25th year at the helm. More remarkable is the fact that he’s had only one losing season in that quarter-century: The Rams were 13-17 in 2011.

… The Rams and Storm met three times this season, with Cleveland winning twice; each game was decided by one run. All-time, CHS is 18-17 vs. RRHS.

… The state tournament bracket seeding show is slated to be shown today (Sunday)  at 1 p.m. at nmact.org. The first round, hosted by higher seeds, is back to a two out of three format, with singles games next Friday and one or two games, as necessary, on Saturday. 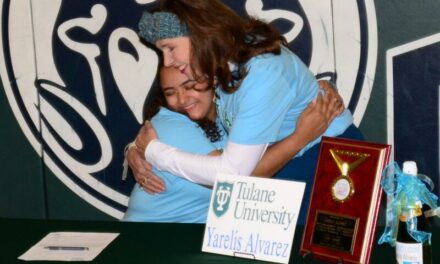 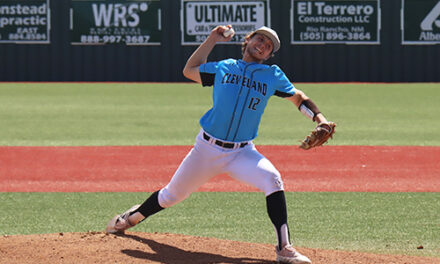