Sixth-seeded Rio Rancho was 3-for-3 in the red zone Friday evening in its 21-7 victory over No. 11 Alamogordo, but the biggest play of the night was made by the Rams defense, and just outside the red zone

Right after quarterback Noah Nelson came up short on a fourth-and-1 sneak, the Tigers (5-6), trailing 14-7, had the ball on their own 47 with a stiff wind at their backs.

But on first down, what appeared to be a designed “flea-flicker” play coughed up the ball and Rams senior linebacker Chris Montoya came up with the ball. It was a 26-yard loss for the Tigers, giving the ball just outside the red zone at the 21.

Five plays later, Nelson scored from the 1-yard line with 1:16 left to play – and the Rams (7-4) knew they’d be headed to Las Cruces Friday night to play No. 3 Centennial (8-1) in a Class 6A quarterfinal contest.

As for Montoya, “First of all, our coach called an amazing play. He sent both linebackers up the middle; it helped us a lot.

“When I saw that (errant) snap, my first initial reaction was get there – get there as fast as I can and try to make a play.”

He did, clinching the Rams’ win.

The Rams never trailed in the game, meeting Alamogordo for the third time in first-round games, all at Rio Rancho Stadium.

Starting quarterback JJ Arellano capped a nine-play, 67-yard drive on a 1-yard run, with Bryson Strohecker adding his first of three points-after, with 4:25 left in the opening quarter.

Alamogordo came scored on its next possession, a 13-play, 75-yard drive on a 2-yard run by Damon Mayberry.

Arrelano scored the lone TD of the second quarter on a 7-yard run, ending another nine-play drive that covered 65 yards.

That 14-7 lead held up until Nelson’s score. He entered the game when Arellano went out with a leg injury; ironically, Arellano got the nod at starter after Nelson suffered a leg injury in the Rams’ Homecoming victory.

Arellano may not be available for the quarterfinal game, but coach Nate Pino said that would be determined after some “imaging” of the injury.

“It’s been ‘next man up’ the whole year,” Pino said. “We played excellent on the defensive side of the ball, but that one drive. They flew around and did a good job for us.”

That Rams “D” had four sacks and limited the Tigers to a meager 86 yards of offense.

RRHS’s Arellano, with 130 rushing yards, and Rayce Ramirez, with 142 in his best game of the season – both on 25 carries – easily out-performed the Tigers’ attack.

“Offensively, we did a good job with the ball, we’ve just got to finish drives,” Pino added.

Moving into the quarterfinals, the Rams are 6-7 all-time at the Field of Dreams, where they’ll face the Hawks Friday at 7.  Centennial is 2-1 vs. the Rams, although the Rams’ win was in the first round of the 2017 playoffs, a 24-7 victory at RRHS.

The Tigers beat No. 8 Cibola  31-14 Saturday afternoon at Nusenda Community Stadium in that first-round contest.

The Storm and Tigers have never met on the football field. Los Lunas was the 5A champ in 2021, and moved into 6A this season.

Friday’s winner then meets the winner of the Volcano Vista at Hobbs quarterfinal game in a semifinal contest Nov. 18 or 19. 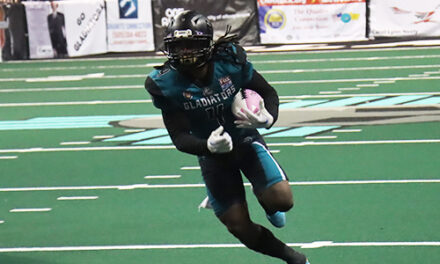