Caiden Dawes has given the Storm boys depth in the distance events; here, he’s on his way to a victory in the 3200 at the recent Storm Relays. (Herron photo)he Rio Rancho High School track & field teams swept the annual Wildcat Relays in Clovis on April 14, with Cleveland High placing third in the 11-team girls’ competition.
The CHS boys team did not make the trip, instead competing and winning the Sundevil Invite at Sandia Prep in Albuquerque.
Rice, Gunn are 2-time winners
Devin Rice, winning the 100- and 200-meter dashes, and Dawson Gunn, finishing first in the 800- and 1,600-meter runs, led the victorious Ram boys, who compiled a team score of 121.33.
Hobbs (98) and Clovis (47) were well behind the Rams in the 10-team (varsity) meet.
Also finishing first for the Rams were Mason Steel (3,200), Anthony Heavyrunner (300-hurdles), Cayden Romero (shot put) and the 4×100 and 4×200 relay teams.
Heavyrunner logged a runner-up finish in the 110-hurdles, and the 4×800 and medley relay teams also finished second.
Collyn Tomoyose was third in the 1,600 and Cody Sullivan was third in the 3,200, while Sebastian Farrell was third in the pole vault and Maddox Presser was third in the discus.
Glenn is Sterling with 1st and 2nd places for RRHS
Sterling Glenn won the shot put and was second in the discus to lead the RRHS girls to their first-place finish, 18 points ahead of runner-up Alamogordo.
Esther Cameron (1,600) and Danika Marquez (3,200) had Rio Rancho’s other wins, as did the 4×200 relay team.
Loryn Trujillo and Sophie Baum finished right behind Cameron and Marquez, respectively, in the 1,600 and 3,200. The Rams’ 4×800 and medley relay teams were also second.
Brennen Stephens was third in the 3,200, Camryn Smith (long jump) and the 4×100 relay team gave the Rams their other third-place finishes.
Ulmer qualifies in 3 events
Kennedy Ulmer led the Storm girls with 1-2-3 finishes, respectively, in the discus, javelin and shot put.
Jaylee Gandert had the other individual win, in the javelin, while the CHS 4×800 and medley relay teams also were first.
Nia Mamuya was second in the 100. Eliana Rivera was third in the 1,600.
“We had some great things happen,” said coach Carla Chavez. “We qualified two relays, the 4×800 (Katie Frazier, Leah Futey, Jade Medina and Ximena Mendoza) and medley (Gabi Jones, Mamuya, Medina and Futey).
“These ladies worked hard to get an outstanding time in each relay,” Chavez added. “We were also able to get better marks in the javelin, as newcomer Jaylee Gandert bettered her mark to 119 feet from 113 feet. Kennedy Ulmer also qualified in the javelin with a throw of 115 feet. I am super-excited that Kennedy has qualified in all three throwing events. We ended up getting third place (one point behind runner-up Alamogordo) at the meet, and I’m extremely proud of the way these ladies performed.”
Nine firsts at Sandia Prep
Evan Wysong was a two-time winner for the Storm boys, nabbing the 100- and 200-meter dashes.
Also finishing first for the Storm were Antonio Avila (400), Caden Nunn (800), Charles Sanchez (shot put), Dominic Vasquez (javelin), and the 4×100, 4×200 and medley relay teams.
Cleveland had eight runner-up finishes: Brayden Ford (200), Koen Biggs (400), Caiden Dawes (1,600), Elijah Griego (300-hurdles), Cole Savage (high jump), Brandon Tenorio (javelin), Stratton Shufelt (shot put) and Kendall Ulmer (discus).
Placing third for the Storm were Cody Toya (800), Johnathan Sanchez (3,200), Camryn Bannerman (shot put), Ethan Dodd (long jump) and the 4×400 relay quartet. 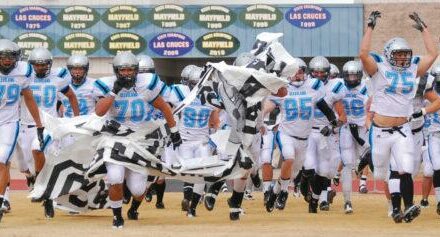