Tyler swatted Jaymin Fitak’s first pitch over the left-field fence, and the Storm added an unearned run and went on to win, 4-2, Monday afternoon at Volcano Vista.

While the Storm were winning on the West Side, so, too, were the Rams (21-3, 5-1), who won an important game at Cibola, 4-0, behind six no-hit innings from lefty Devon Alvarado.

Cleveland starter Jace Dominic and reliever Logan Kinter, who pitched the final two innings and got the win, each gave up two singles to the Hawks (14-8, 4-3), who end their regular season by hosting Rio Rancho Friday afternoon.

Dominic struck out 11 Hawks, relying on his fastball, with a velocity in the mid-80s.

The only batter he walked came around to score Volcano Vista’s first run, in the fourth, when each team scored twice. The tying run came on a double-steal, with Dominic apparently paying too much attention to a runner on first base and not the Hawk at third.

“I threw a high pitch count and went through the order three times already,” Dominic said of his departure. “We trust Kinter and he did his job.

“This was huge; this was definitely a big game for us, especially after that (2-1) Cibola loss. We can win district (Tuesday).”

Tyler didn’t have much to say after his first homer since his days at Mountain View Middle School.

“I was looking for a pitch that I could drive the other way,” he said. “I got out front. It all worked out.”

Tyler had two hits, legging out an infield single in the fifth. DJ Sandoval and Austin Barela also had two of the Storm’s eight hits.

The city’s teams close out the regular season Friday: The Rams are at Volcano Vista at 4 p.m.; the Storm are home at 6 to face last-place Atrisco Heritage Academy.

The bracket for the Class 5A tournament will be released Sunday at nmact.org.

Accolades for the Rams

In local baseball news, MaxPreps has put the spotlight on 10 of the most incredible high school baseball fields in the country.

Leading off the short video is the Rio Rancho High School stadium.

As seen in the video (at MaxPreps.com; also on Observer Facebook page), the tour includes nine other ballparks, from California to Virginia.

Cleveland shortstop DJ Sandoval makes contact at Volcano Vista, where he had two of the Storm’s right hits. (Herron photo) 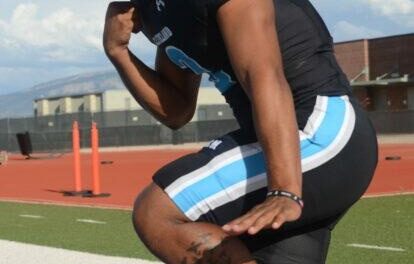 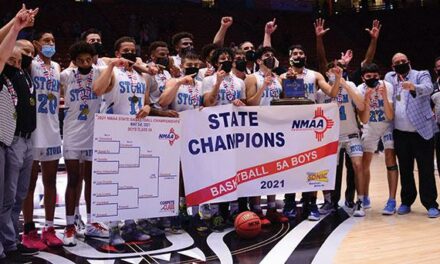 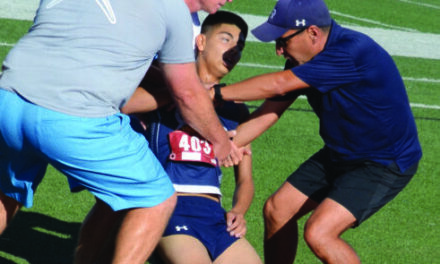