The city’s high school tennis teams split their meetings Thursday afternoon, a relatively pleasant and almost windless day, with the Cleveland boys winning at Rio Rancho, and the Rams girls winning at Cleveland. 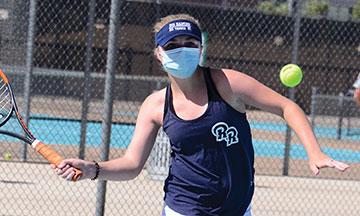 Ladies first
Junior Kate Segal and sophomore Samantha Baltz keyed the Rio Rancho High School girls tennis team to its 5-4 victory, leaving the Rams (7-3, 3-0) “one win away to the district title,” says coach Uwe Balzis.
“Those two competed very strongly, not only in this match but throughout the whole season, adding three points to our overall score (doubles and singles) in almost every match,” lauded Balzis.
In singles play, Segal beat Mikayla Barrette 6-3, 6-1, in No. 1 play; in No. 2 singles action, Baltz swept Peyton Casey, 6-0, 6-0.
Segal and Baltz beat their singles counterparts, Barrette and Casey, 6-0, 6-2, in their doubles meeting.
The other Rams winners were No. 4 singles player Kennedy Baugh, a 6-1, 6-1 winner over 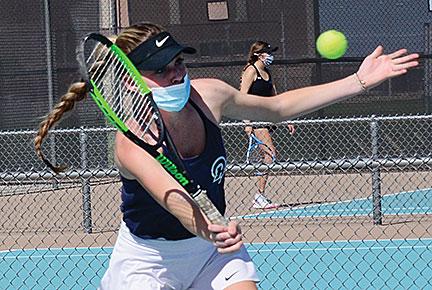 Cleveland’s Mikayla Barrette goes to the forehand in her doubles match vs. Rio Rancho Thursday afternoon, when she teamed with Peyton Casey. Gary Herron photo.

Jaylynn Rascoe in the match that clinched the Rams’ victory; and “extra” singles player Brianna Valdez defeated Sophia Kehoe, 6-1, 6-1.
The Storm victories were at No. 5 singles, where Rachel Shaw beat Pressley Saxon (6-2, 6-2); No. 6 singles, where Maya Jio needed a tie-breaker to down Miriam Shin (6-4, 4-6, 5-2); and No. 2 doubles, where Cadence Boras-Rachel Shaw topped Ashlee Searle-Baugh (6-3, 3-6, 6-2). The Storm (8-2) also took a set by forfeit.
“(We’re) 2-1 in conference and have Atrisco left,” CHS girls coach Diana LaCour said. “We should finish 3-1 for district, since Atrisco does not have a full team roster. … (And we’re) hoping to have a few players make individual state (brackets).”
“Our highlight/signature wins out of district were a 5-4 win at Albuquerque High and a 6-3 win at Albuquerque Academy,” Balzis said, hoping that carries weight for state.
This week, the Storm are at Atrisco Heritage Academy Tuesday and at Belen Wednesday; the Rams host Volcano Vista Tuesday and then visit Sandia on Thursday.
The matches start at 3:30 p.m. 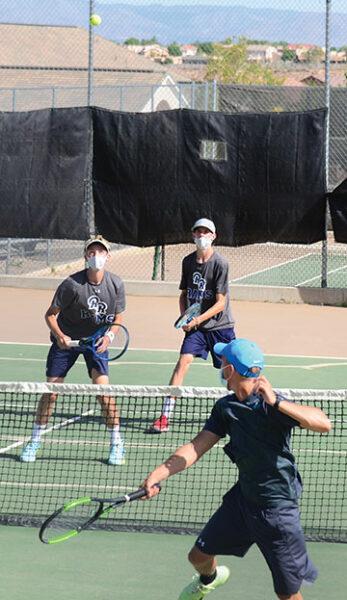 RRHS doubles tandem Austin Ladd, left, and Keegan Gooch watch for a shot (upper left) to return to Earth against their Storm foes, Taylor Mick- Keck and Bryce Schuman (out of frame). Cleveland prevailed, 6-1, 6-3, in this match. Gary Herron photo.

Time for the boys
The Storm won two of three doubles matches and half of the teams’ six singles matches in their 5-4 victory.
Winning their singles matches for the Storm were No. 2 Bryce Schuman (4-6, 6-4, 6-1) over Austin Ladd; No. 3 Cameron Cowden (6-3, 6-1) over Keegan Gooch; and No. 4 Ryan Henderson (6-3, 6-2) over Ryan Meier.
RRHS’s No. 1 singles netter, Isaac Miller, took straight-sets wins over Taylor Mick-Keck, 6-0, 6-4; No. 5 Ram Thomas Icken beat Gavin Knudsen, 6-2, 6-1; and No. 6 Ram Jonathan Shin came back after losing the first set, 6-0, to beat Mark Evans, 6-3, in the second set, and then won the tie-breaker, 7-5.
The victorious Storm doubles teams were No. 1 Schuman-Mick-Keck (6-1, 6-3) over Ladd-Gooch; and No. 2 Cowden-Knudsen (6-1, 6-4) over Meier-Icken.
At No. 3 doubles, RRHS’s Brodrick Lasley and Shin topped Henderson-Evans, 6-3, 7-5.
“Cleveland’s boys (11-1, 3-0) should make team state (competition) and win district,” LaCour said.
“My team is young but they’re improving quickly.,” RRHS boys coach Tom Gutierrez said. “I was especially proud that they went toe-to-toe with a very good Cleveland team — with five senior starters — and gave themselves a chance to win. We’ll learn from this and move forward.”
This week, the Storm boys host Atrisco Heritage Academy Tuesday and are at Belen Wednesday; the Rams play Volcano Vista Tuesday at Ventana Ranch and then host Sandia on Thursday.
The matches start at 3:30 p.m.