Rams second in boys’ and girls’ races at Extravaganza

In the largest cross country race of the season, the pre-state Academy Extravaganza held at Albuquerque Academy on Oct. 16, the Rio Rancho High School cross country teams finished second in both races, while the Cleveland boys were third and the girls — without 2019 state champ Leah Futey in the field — were sixth.
Ladies first
With all five of their scoring runners on the 5K course finishing among the top 23 — in a field of 173 runners and 22 teams — the Rams girls were second only to Albuquerque Academy, with three among the top-10 and the 14th- and 26th-place runners.
Senior Loryn Trujillo led the Rams, finishing 12th with a time of 20:00.
She was followed to the finish line by teammates Esther Cameron (15th), Violet Francisco (16th), Gracey Lovato (17th) and Luciana Martinez-Crook (23rd). Brennen Stephens (32nd), Danika Marquez (46th), Isabelle Parsons (59th) and Megan McMurtry (95th) also ran for the Rams.
The Rams amassed a team total of 83 points,20 behind the winning Chargers. The Rams’ District 1-5A foe Volcano Vista (98) was third, followed by Eldorado (118) and Albuquerque High (151).
Cleveland (167) was paced by 21st-place freshman finisher Naomi St. Clair; also scoring for the Storm were Marina Weideman (31st), Elise Toya (35th), Eliana Rivera (39th) and Jade Medina (41st). Gabrielle Jones (55th) and eighth-grader Sophia Yepa (80th) also ran for CHS. 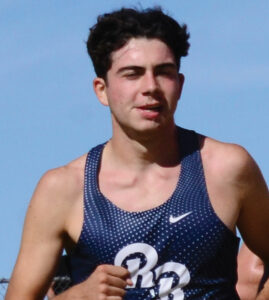 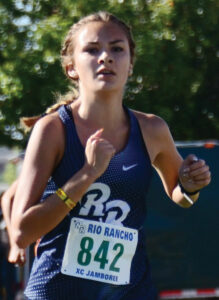 After he won the Rio Rancho Jamboree on Sept. 25, Rams senior Dawson Gunn was behind winning Rendon Kuykendall of Hope Christian and Sandia’s runner-up Steven West for the second race in a row: The Kuykendall-West-Gunn finish also occurred at the Oct. 9 APS Metro Championships — and Gunn also was third at the first meet of the season, the Cleveland Invite on Aug. 28.
District 1-5A teams finished 1-2-3 at the Academy, with Volcano Vista (72 points) winning the 25-team race (201 finishers) with no better finish than a sixth-place runner. The rams had a score of 109, followed by the Storm (135). Eldorado (159) and Organ Mountain (178) rounded out the top five.
Gunn was a distant 36 seconds behind West, the only 5A runner to finish ahead of him in the premier meets thus far, although West has also finished behind Gunn twice.
Also scoring for the Rams were Skyler Galbraith (19th), Cody Sullivan (22nd), Collyn Tomoyose (26th) and Mason Steel (39th). Benjamin Miera (82nd), a freshman, and Diego Francisco (108th) also ran for RRHS.
Cody Toya and Caden Nunn finished 11-12 for the Storm, who also got points from Blayne Howell (24th), Colin Ross (32nd) and Santiago Armijo (56th). Freshman Vince Madalena (60th), Preston Bean (73rd) and Jamell Sanchez (83rd) also ran for the Storm.
Cleveland was slated to run at the Los Alamos Invite, while Rio Rancho was to be at the Rio Grande Invite on Friday. The District 1-5A meet will be hosted by Cleveland on Friday with races at 4 and 4:30; the state meet is again at the Academy on Nov. 6. 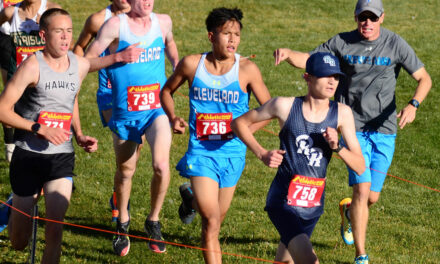 Catching up with the runners; latest cross country results

Rams get their coach record win, then add to it three days later