When the Rio Rancho High School girls’ basketball season starts in the fall, the Rams will be working with a new coach.
Scott Peterson told the Observer Thursday that he has resigned after seven seasons at the helm.
“I was really proud (of our 2021-22 season),” he said. “We did a lot. It’s been a wonderful seven years.”
The Rams were 99-89 in those years, although they missed the state tournament the last three. RRHS got as deep as the semifinals in 2018, losing to Hobbs, 43-33, in The Pit. The next season, Hobbs ended the Rams’ season again with a 55-42 victory in the quarterfinals, also in The Pit.
He said he was also proud that eight of his players went on to play basketball in college, and; “We had a chance to impact a lot of ladies’ lives.”
His best memory of his time at RRHS, he said, “was being able to coach all of my kids (Kayla, Lexi and Halle) — that will always be my special memory.”
You might hear from Peterson again: “I’ll never be done,” he said.
“We appreciate all the hard work and effort and we appreciate (what he’s done) over the years,” Rio Rancho Public Schools Director of Athletic Bruce Carver said.
Carver said the position will be posted this week and he’s hopeful of finding a replacement within a month.

Scott Peterson watches his Rams beat Cleveland in the RAC on Feb. 17. 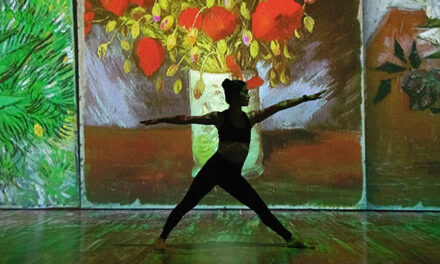