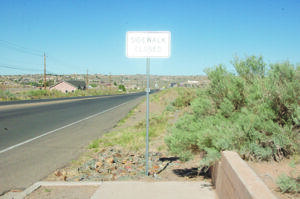 Huitt-Zollars in the middle of a design that looks to expand Northern Boulevard from Broadmoor Boulevard to Acal Place. (Gregory Hasman/Observer)

A proposed project to expand a 1.5-mile stretch of Northern Boulevard into a four-lane road from Broadmoor Boulevard to Acal Place is still in the design phase.

The City of Rio Rancho finished the first phase of the Northern Boulevard expansion project between Broadmoor and Walpi Court about 10 years ago.
In 2021, Huitt-Zollars started the design for the current phase that was 60 percent complete as of March.

The design’s engineer estimates that construction could cost about $22 million, Garcia said.

Part of the proposed Northern Boulevard phase two project could include converting Eric Road into a cul-de-sac. (Gregory Hasman/Observer)

The Northern Boulevard project could consist of expanding roads and altering turning lanes.

Garcia broke the project down into sections.

Acal Place to Unser Boulevard: Unser would continue to have a signalized intersection, though the turn lanes could be expanded to follow State Access Management Manual (SAMM) standards, she said.

Unser Boulevard to Calor Road: There could be some modifications to some of the access points “so when other development comes in, it’s more organized through here,” Garcia said. For example, a plan could include converting Eric Road into a cul-de-sac and connecting Calor with Chessman Drive.

Montoyas Arroyo/Dinadan Road to Broadmoor Boulevard: One possibility could involve the realignment of Fruta Road.

Another idea would be to eliminate the left-hand turn lane coming out of Idalia Road.

“People can come down Broadmoor if they want to head east on Northern Boulevard,” Garcia said.

Huitt-Zollars has been communicating with residents, property owners and others who may be affected by the work.

This section is probably the most challenging given its proximity to schools, commercial properties and other development, she said.

For example, east of Montoyas Arroyo work may include the construction of a curb, gutter and curb drop inlets. To the west of the arroyo, a storm drain could be installed.

This would help the area deal with rain events, Garcia said.

Other goals of the project include improving traffic safety and multi-modal infrastructure.

Work would include raising the median, adding bicycle lanes on both sides of Northern Boulevard, putting in a walking trail, adding uniform roadway lighting and retro-reflective signing and striping.

The Northern expansion would help with traffic flow issues, she said.

The traffic count between Broadmoor and Unser boulevards was about 17,000 vehicles a day (8,500 in each lane) in 2019 before traffic slowed down due to the pandemic.

“Seven thousand per day, per lane, is what we shoot for,” Garcia said.

It is unknown when construction will get started.

The project’s final design is probably going to be completed in the fall. Then there is the right of way acquisition process, which could take up to a year, she said.

Then the questions become: How will the city will pay for the project? And how many phases will it take to get the job done?