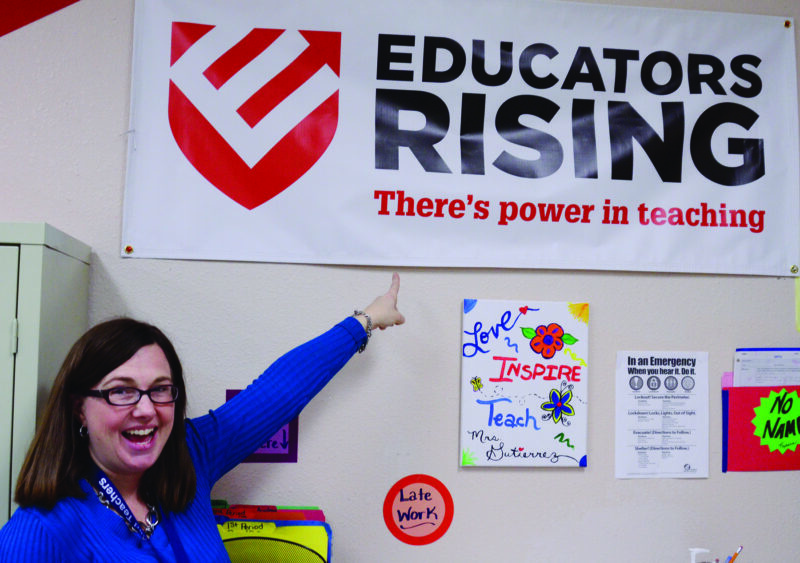 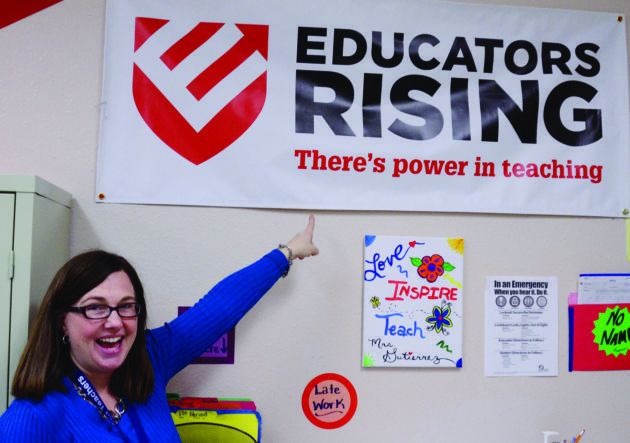 A recent raise for the state’s teachers, along with a requested raise again this year, is a good reason Rio Rancho High School Principal Sherri Carver believes fewer good teachers are leaving the profession.

Still, finding qualified teachers and keeping them is a challenge for her. Like most administrators, her days in education began as a teacher.

And she knows the meaning of determination: “My first year in an English classroom with ninth-graders was definitely not what I was expecting — it’s so true what they say, just having a degree/certificate does not prepare you to be a successful teacher.

“I hung in there — learned how to manage students, build relationships, learned some Shakespeare — and here I am 30 years later,” she said.

Hence, her backing for “Educators Rising,” led by veteran teacher Amanda Gutierrez. The program is designed to not only get students interested in the profession, but also get them the proverbial hands-on experience.

“Educators Rising is both a club and thee classes,” Gutierrez began. “We have a club for students who are not able to be in the class and for extra activities. The club volunteers at the evening activities at local elementary schools. We worked at several of Ernest Stapleton Elementary’s parent/ student nights this year. We also will be going to the Dr. Seuss day at Stapleton, and students in the club participate in competitions at state if they are interested. I sponsor the club along with co-sponsor Pam Flores.”

Educators Rising began four years ago with two students. It doubled to four the next year, then 20 and currently has 50.

“She has really gotten kids interested in the program, sold it to the elementary principals and goes out to monitor the students at the elementaries who are doing ‘teaching’ with guided supervision,” Carver said. “Students are loving the program — and I expect the numbers will grow more next year.”

There’s no deterring RRHS senior Daisy Boyer, who’s won Educators Rising acclaim at the state and national competitions, from someday becoming a teacher. She has enjoyed three years in the RRHS “Teachers Academy” classes and where they have taken her.

Next year, she plans to be a student at Eastern New Mexico University, where scholarship aid is available for future teachers who pledge to teach in New Mexico.

“Your job is to teach these students, not only what’s going to be on the next test, but how to prepare for the rest of your life,” Boyer said. “It’s not just about the material that you’re teaching them; it’s about teaching them how to live life, how to love — that you care about who they are.

“I want to do something with my life that is impactful,” Boyer said. “That’s why I want to be a teacher — because I am impacting the next generation; I am being there for students who don’t have someone else there for them.

“That’s why it’s so hard to be a teacher right now: Because these students have such difficult backgrounds,” she said. “This generation is a lot different than what it used to be, because there are so (many) things going on in their world today.”

“Kids just bring so much more to the school house now,” Carver agreed. “It’s not get up, eat breakfast with your mom and dad, and throw on your clothes and you get on the bus. Now, they’re just coming with so much that is happening in their lives — and at such a young age.”

Carver has learned educators can be defined in several ways.

“I used to say a ‘highly qualified’ teacher is one that had a state teaching license, had at least a bachelor’s degree and demonstrated that they could teach their subject matter — so, an ‘experienced’ teacher,” Carver explained. “In 2020, my thoughts of highly qualified have changed.

“I hired a person about three years ago who had a master’s, worked as an engineer at one of the labs, but had never taught in a high school classroom; she wasn’t classified as ‘HQ,’ but she was a heck of a teacher from day one — one of the best I have seen,” Carver said. “She has since obtained her teaching license through the alternative licensure route and she continues to grow into one of our teacher leaders.”

In 2020, teachers can be considered highly qualified if they’re in an alternate-certification program, hold a bachelor’s degree and can show subject-matter competency.

But, Carver added, “I also have outstanding teachers who struggle to pass the state academic test in their area — you may say that doesn’t sound like an outstanding or HQ teacher if they can’t pass a state test, but I promise you, there are situations. Two examples — people with test anxiety; science teachers required to pass all areas of the science test, including competency in biology, chemistry, physics — that’s a wide area of required knowledge.”

Given that, she said she’s “currently full,” but had a math teacher recently resign because he found a job closer to home with Albuquerque Public Schools.

Carver, the salutatorian of Melrose High School’s Class of 1981, began her teaching career in 1990.

“I just taught English, and I really concentrated on what I was delivering,” Carver recalled. “But now, I think the ‘relationship piece’ is just 100 times more important, because you really have to know where those kids are coming from and what they’re dealing with so you can get them in the frame of mind to even learn English.”

It’s getting “tougher and tougher” to be a teacher in the 21st century, Carver has found out, and better relationships with the parents would help. Educators often have trouble communicating with or even reaching parents of students who are getting in trouble.

“(Some teachers) just don’t feel comfortable just talking one-on-one with a parent, because they don’t get the respect; they get talked down to, they use profanity at them; they blame, they accuse; they make excuses for their students,” she said.

Given all that, Gutierrez is happy to have students still willing to become educators.

“This program was designed to help fix the (teacher) shortage,” Gutierrez said. “This is part of what Educators Rising passion is: To bring effective teachers into the classroom; that they are well aware of what is going to happen, that they are knowledgeable about the fact that it is not going to be the easiest job.”

She said an eighth-grade teacher she had got her thinking about becoming a teacher, and that teacher gave her confidence that she could become successful in the field. That teacher knew what Gutierrez was dealing with: Gutierrez’s mother had passed away that year.

She grew up in Florida, where she taught her first 7½ years; she then got a teaching job in Magdalena, which led to the job in Rio Rancho, where she’s been the last five years.

“It is a challenging job,” Gutierrez acknowledged. “You have to answer 40 emails a day; at the same time take attendance; at the same time meet each child’s needs. … ‘Are you feeling OK?’ and ‘I have to teach you this.'”

“I think it’s still the same old goal,” Carver added. “We want to make a difference in people’s lives, and what more-rewarding way to do that than to affect young people’s lives?” 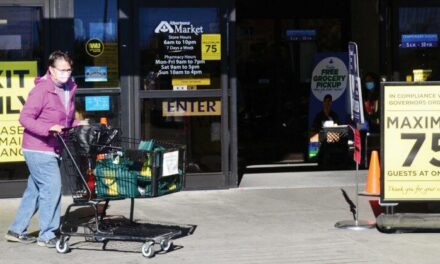 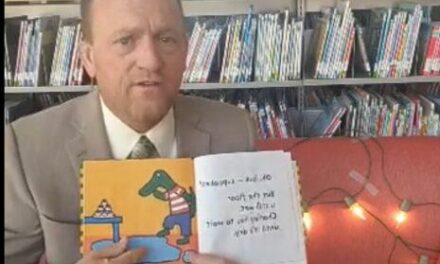 Mayor, others connect kids to libraries during pandemic