Pro pep talk for the Rams

Round Rock,  which was in Albuquerque to face the Albuquerque Isotopes in a 6-game series Aug. 23-28, had bench coach Chase Lambin, left, who played for the Isotopes in 2008, and team manager Matt Hagen speak to Rio Rancho High School baseball players on Aug. 26. Lambin, a hunting buddy of local veterinarian Mike Forsyth, who helps coach the Rams, and Hagen emphasized the importance of “effort and attitude, how it was more important to be the hunter, not the hunted — the victor, not victim” — and to understand that “Your talent will run out at some point … and all you’re left with is character.” Rams head coach Ron Murphy said, “The message they gave was powerful.” (Herron photo) 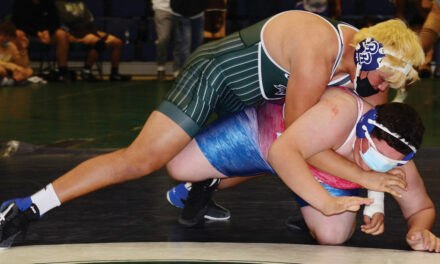