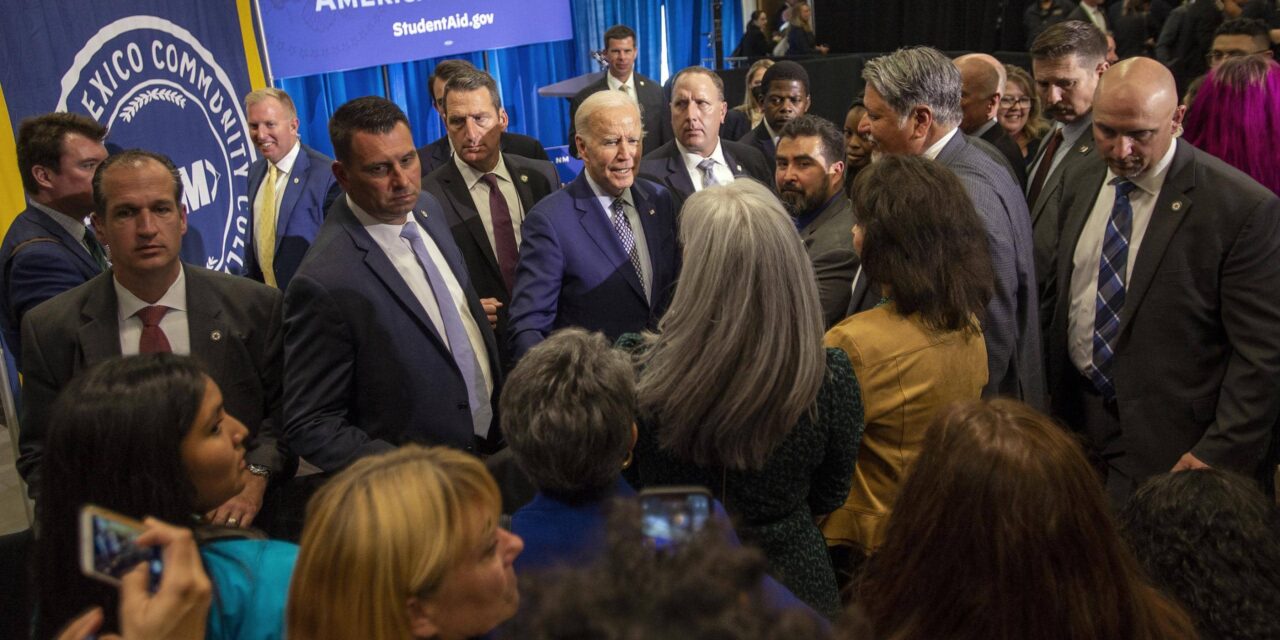 With control of Congress at stake, President Joe Biden zipped into Albuquerque in the final days before a critical midterm election, calling on voters – Democrats and Republicans alike – to protect democracy and reject candidates who cast doubt on the integrity of U.S. elections.

He delivered an enthusiastic defense of Gov. Michelle Lujan Grisham – who’s locked in a tough reelection fight – and urged voters to recognize that democracy itself is on the ballot following last year’s attack on the U.S. Capitol.

“Literally everything is at stake in just five days in this country we love so dearly,” the president said Thursday as he rallied with Democratic voters at a community center in Southwest Albuquerque.

The president’s visit to New Mexico – his second in the last five months – came as Democrats push to flip a Republican-held seat in the U.S. House and propel Lujan Grisham to reelection over Republican Mark Ronchetti.

In a 30-minute speech Thursday afternoon at Ted M. Gallegos Community Center, Biden devoted some time to defending Lujan Grisham and lashing out at national Republicans – who, he said, would jeopardize abortion rights, Social Security and Medicare, and damage faith in elections.

“No one is going to fight harder for this state,” Biden said of the governor. “It’s in her DNA.”

But even with New Mexico poised to play an outsized role in which party controls Congress, Biden mentioned the Democratic candidate challenging Republican Rep. Yvette Herrell – Gabe Vasquez – directly only once.

The newly redrawn 2nd Congressional District, now held by Herrell, is among a dozen of the most competitive races in the country that could serve as a tipping point for securing a majority.

“We’re scaring the living hell out of the rest of the world,” Biden said. He added: “Democrats and mainstream Republicans, independents – we can meet this moment together.”

After arriving on a windy tarmac at Kirtland Air Force Base at 12:30 p.m., where he was greeted by Mayor Tim Keller, Stansbury and Luján, Biden went to Central New Mexico Community College. He met with students before he and Lujan Grisham discussed higher education initiatives and accomplishments.

For Lujan Grisham, it was providing free tuition to in-state residents through a new Opportunity Scholarship.

Biden, meanwhile, has taken steps to forgive up to $20,000 of college debt for millions of Americans. The action has been challenged in court and remains under litigation.

By the end of the week, Biden said that 16 million Americans will hear from federal officials that their debt relief has been approved, though the pending litigation leaves it uncertain when they will actually receive the money.

“Wiped Away. Immediately. Plain. Simple,” he said of the debt during his 23-minute speech.

Biden billed both his and Lujan Grisham’s initiatives as investments in young people at a crucial moment for the country.

“Today we face an inflection point, one of those moments that only come around every few generations,” he said. “There’s so much happening technologically, politically, environmentally, the decisions we make now are going to affect the future for a decade or more.”

Lujan Grisham recalled that CNM was the site in 2019 where she first unveiled her idea for free-college tuition for New Mexico residents.

“In short order, that is exactly what we did,” she said. “New Mexico is home to the most expansive free-college program in the nation. It is, without measure, absolutely working.”

State officials have said the governor’s Opportunity Scholarship led to the first increase in enrollment at New Mexico’s public colleges and universities in a decade. More than 34,000 students received the scholarship throughout the state this fall, according to the Higher Education Department.

CNM students Ava Marr and Candice Clark were among the scholars – all of whom are receiving the Opportunity Scholarship – that met with the president.

Clark said the scholarship has changed her life. She is 39, a mother of seven and a first-generation college student.

“It absolutely makes the difference between college or not college,” she said of the scholarship. “This has opened up a whole new world for me, and in extension, my children.”

Marr said that Biden joked around with the students and poked fun at himself and his grade-point average while taking photos with them.

“It wasn’t what I was expecting,” Marr said. “Very kind. He was funny.”

CNM President Tracy Hartzler said that more than 7,000 CNM students are getting the Opportunity Scholarship, which was a reason the school’s enrollment grew 3.1% this fall.

“President Biden’s visit is obvious political theater,” Steve Pearce, chairman of the Republican Party of New Mexico, said. “It’s a desperate attempt by Democrats to get a big name in at the last minute to salvage their losing election effort.”

Ronchetti, a former meteorologist for KRQE, has campaigned with GOP heavyweights this year, too, including former Vice President Mike Pence and the Republican governors of Arizona, Florida and Virginia.

“New Mexicans expect their leaders to be accountable for their failures,” he said, “yet all we hear from Joe Biden and Michelle Lujan Grisham is out-of-touch deflection while our families are left holding the bag.”

As the wind whipped southwestern Albuquerque, hundreds of people stood in line outside the Ted Gallegos Community Center hours before Biden arrived. They crammed into a small gym to watch the president, who stood on a riser with “Building a Better America” and state and U.S. flags on the backdrop.

Some watched on a screen outside the community center. About 1,000 people attended altogether.

Democrats up and down the ballot delivered short speeches.

“Everything is on the line this election,” Stansbury said, “from our democracy to our fundamental rights to our ability to continue to deliver for the American people and for New Mexico.”

Pueblo of Isleta Gov. Vernon Abeita opened the event with a prayer, and guitarists played northern New Mexico music in between speakers.

Shouts from the crowd – “We want Joe” – erupted occasionally.

Lujan Grisham took the stage amid chants of M-L-G.

“I feel so energized. I needed you today,” she said, “and New Mexico needs you.”

The national context was clear in some speeches. Luján touched on the Senate race in Pennsylvania, where the Democratic candidate is recovering from a stroke, as Sen. Luján did.

“If you want to know what a stroke survivor looks like, here it is,” he said from the stage. “We’re in fighting condition.”

The visit came in the final days of an unusually brutal, tense campaign season in New Mexico. The FBI is investigating the mailing of a chemical substance and material with antisemitic symbols to Conservation Voters New Mexico in Santa Fe.

The state’s commercial time on TV is filled with attack ads, and negative mailers are flooding post office boxes.

The party in control of the White House often loses down-ballot races at midterm elections.

But Biden’s visit was designed to energize Democratic voters ahead of Election Day. Absentee and early voting turnout so far this year has generally trailed 2018 levels, when 56% of registered voters cast ballots.

Biden opened his late-afternoon speech on a personal note, noting that – like an earlier speaker – his family had struggled with cancer, which killed his son, Beau.

“He should be the one standing, talking to you, not me,” Biden said. 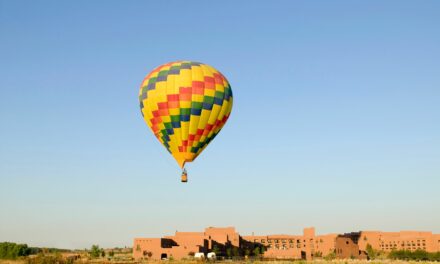 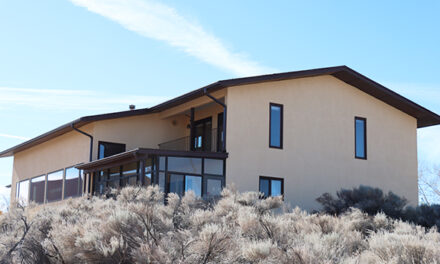 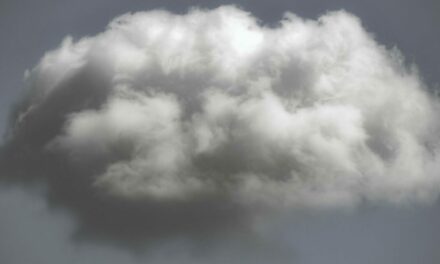