SANTA FE — Those who worked at the Rio Rancho Observer some 12 years ago considered David McCollum a hall-of-fame kind of guy. 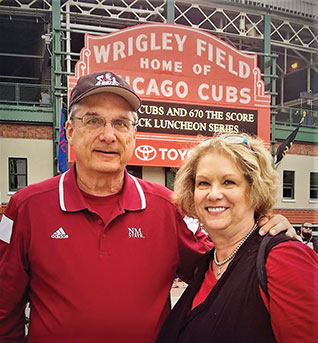 David and Jaki McCollum are big sports fans, as seen here in a photo of them at Wrigley Field in Chicago. Courtesy photo.

He bought the struggling newspaper from Wick Communications and ran it for several years with his business partner, Rockford Hayes.

Now, it’s official: On Oct. 30 at El Dorado Hotel and Spa in the City Different, McCollum was the lone inductee into the New Mexico Press Association’s Hall of Fame.

“This (honor) is beyond anything I would have imagined — it’s not even something I’d dreamed about, because we sold our business 10 years ago,” he said. “I fought through the tears.”

Back in 2003, McCollum and his wife, Jaki, decided to purchase the struggling Las Cruces Bulletin, a weekly newspaper.

The couple formed FIG Publications LLC and turned the Bulletin into a well-respected community newspaper. That paper’s success led McCollum, then the NMPA president, to try the same thing with a weekly in Rio Rancho in 2009.

The country was still in that economic depression, newspapers around the country were down-sizing or closing altogether and the Observer — in business since 1973 and owned by Wick Communications since the mid-1980s — was on the brink of suffering a similar fate.

“I was president and we just had a board of directors meeting in Santa Fe, and Robin Martin said, ‘Can you come and visit with me in my office?’ She said, ‘I want to talk to you about the Rio Rancho Observer. I’ve gotten notice from the owners that they’re going to close the newspaper.’

“Of course, she was looking to protect her printing interest as well, but she had a genuine interest, I think, in not losing a newspaper in New Mexico.”

McCollum agreed. He wasn’t particularly interested in buying the Observer, though.

“I think my wife said something like only over her dead body would we do another newspaper, and Robin said, ‘Will you at least talk to the Wick people?’” McCollum recalled.

When he said he’d be glad to talk, Martin called the man who provided financial information. Then, the McCollums drove around Rio Rancho and were impressed.

“We said this is a community that deserves a newspaper. … I said, this really makes sense to me,” McCollum said.

So, the McCollums bought the Observer and brought in the NMPA’s president of the previous year, Hayes, to be the on-site publisher — he came here from the Carlsbad Current-Argus — and the rest is history. The Observer continued to exist, even though the McCollums sold it to Hayes in 2012; he later sold it to Albuquerque Publishing Co.

Suffice it to say, though, without McCollum’s interest, there’d be no Observer today.

He’s understandably proud of having created a local voice in Rio Rancho, although, “We didn’t extend it quite strategically as far as we did in Las Cruces, but I think that market is still there — but you need to understand that the ownership needs to be committed to being in the newspaper business.

“People today still are interested — even young people — in reading a local print newspaper; I’m absolutely convinced of it,” he said. “You cover local people, local events and you just connect yourself to the community — if you think about it, the newspaper is the community.”

Ink on his hands a long time
Go back to 1956 and you’d have seen young Dave McCollum using a sheet from his “Big Chief” writing tablet to create a mini-newspaper about his school and third-grade classmates.

Two years later, he was writing a weekly column in his hometown newspaper, The Shidler (Okla.) Review. Four years after that, he was freelance writing sports stories for a handful of newspapers in Oklahoma.

After graduating from high school, he headed to Oklahoma State University and majored in journalism. (Despite his OSU interests, McCollum handled the business side of New Mexico State University athletics from 2012-16.)

He remained in the business, selling advertising, writing, publishing and more, finding time to join the Kansas National Guard in 1970 and was commissioned six years later as a public affairs officer in the U.S. Naval Reserve.

Although he’s an Okie, he’s also lived and worked in Alabama and Pennsylvania in his professional career. He and Jaki have been married 50 years; they have three children, six grandchildren and one great-grandchild. 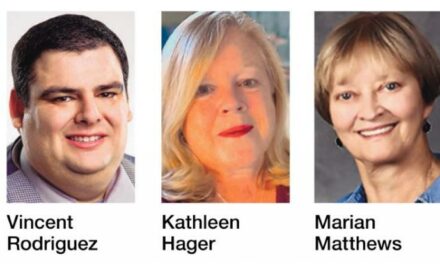