Score early and score often was the theme on Jan. 21 at Rio Rancho Events Center, where the New Mexico Runners scored the game’s first six goals on their way to a convincing 16-7 victory over the Colorado Inferno.

A mere 62 seconds into the MASL 2 contest, four-year veteran Froilan Ramirez connected on a pass from Nick Famiglietta on the way to the rot.

That early lead, which was 6-1 when the first period ended, included a hat trick from second-year standout Mehrshad Ahmadi, on his way to a six-goal performance off his 15 shots on the Inferno goal.

Gabe Prada ended the scoring drought for Colorado with 43 seconds left in the first quarter.

The Inferno outscored New Mexico (3-0) 4-1 in the second quarter, narrowing the Runners’ advantage to 7-5  at intermission, which featured the “big reveal”: Team owner Andres Trujillo and his wife Kathryn, along with their year-old son Ezekiel, did a soccer-style reveal that emitted blue confetti, indicating Zeke will soon have a brother.

Colorado (0-4) appeared to have found its footing coming out of halftime, but it was a short-lived comeback. The teams traded blows throughout the third with a heated exchange between Colorado’s Josue Jimenez and New Mexico’s Miguel Garcia, resulting in a yellow card assessed to Garcia, keeping him sidelined for the remainder of the period.

The penalty seemed to ignite the Runners’ offense again, and they closed the game on a 4-0 run, which included a pair of goals by Vince Aragon and Ahmadi’s sixth of the game.

Ahmadi, who saw action in seven games last season, has already scored 15 goals in the Runners’ first three games of 2022-23.

On the other end of the floor, starting goalkeeper Nate Yeager has allowed just 15 goals in his three starts, notching a .647 save percentage.

The Runners are on their best start in franchise history, and one of two remaining undefeated teams in the MASL 2; the Rochester Lancers is the other.

The Runners are on the road for their next two games, in Amarillo to meet the Bombers Jan 29, and at Wichita on Feb 4.

New Mexico returns home Feb 11 at 5:05 p.m. to face the Dodge City Bandits, the team they whipped 7-1 on Dec 18. It’ll be Educators Appreciation Night, and teachers showing their ID will be admitted free.

Tickets can be purchased at newmexicorunners.com/tickets

Hoops … There it is. Basketball camps in Rio Rancho this week 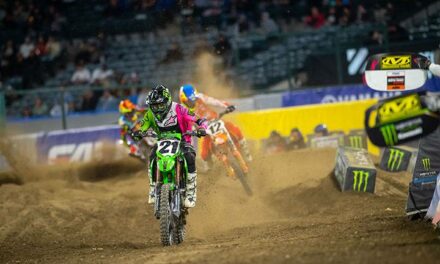