It was a beautiful Friday night for a Homecoming football game — an even better night for Rio Rancho High School fans — and a great night for an induction ceremony in the black box theater.
Before the Oct. 1 introductions began, Rio Rancho Public Schools Executive Director of Athletics Bruce Carver told the gathering, “Some of my favorites are out here” and encouraged the inductees to “reflect on some of the great memories you have at this school; really relish it.”
All six — five of them former student-athletes — of the latest RRHS Sports Hall of Fame inductees, along with a crowd of about 75 people, were there for the 75-minute ceremony, first hearing words of praise from those chosen to introduce them, and then having a few minutes to offer a few words about their experiences during their days at RRHS and their gratitude for this honor.
In alphabetical order for their presentations, they were:
Megan Muñiz (Class of 2008): The state’s female basketball Gatorade Player of the Year after the 2008-09 season, Muñiz was introduced by her varsity coach at RRHS, Bobby McIntyre, who termed her “a very skilled player. Like all the great ones, she made everyone around her better. … Everything came so easy to her.”
The former first-team All-District player for four consecutive seasons, Muñiz never had much to say as a player and, even now as a teacher at the Air Force Academy in Colorado Springs and working on her Ph. D., she hasn’t changed.
“Coach, you’re still taking care of me,” she said.
Max Ortega (Class of 2009): A rare, five-time state high school wrestling champ, he was introduced by his older brother and training partner Matt — also an RRHS SHOF member and “only” a four-time state wrestling champ.
The brothers learned early while being initially coached by their father, “You can’t take shortcuts if you want to be the best,” Matt said.
The Ortegas were teammates after graduation at Indiana University, where Max left after one season to wrestle at Adams State University in Alamosa, Colo.
Matt, Max said, “beat me up every single day” when they were youngsters, but without that training and his persistence on the mats, “I don’t think I would be anywhere without wrestling.”
Louis Trujillo (Class of 2010): Introduced by his proud father Louis, the younger Trujillo was touted as a three-sport athlete, having competed as a freshman in cross country and track & field — and he also boxed and competed in triathlons.
The new inductee was “a good student, a great son, a good worker” in his father’s business. “It never came easy; he had to work for it.”
Thanking his father and coaches Jason Nickal and Mike Santos, Trujillo said they all “helped me be the best I can be (in wrestling) … a very rough, demanding sport. It was brutal on the mind.”
Josh Walker (Class of 2010): “Josh Walker is a class man,” touted his baseball coach at RRHS, Ron Murphy, who introduced him. “He was our stud on the mound.”
Walker, said his coach, epitomized respect, loyalty and family and “met challenges head on.”
Walker credited Murphy as “one of the most-important people in my life” and “showed me how important family is and how everything starts at home.
Walker went on to earn a college scholarship and win 26 games for the University of New Mexico Lobos before playing minor league baseball for a few seasons.
“It’s really cool to be part of this group,” Walker concluded.
Marcus Williams (Class of 2008): Introduced by his mother, Carol Williams, this three-sport former Rams standout could dribble a basketball behind his back when he was 6 and started high-jumping when he was 9.
“Marcus was a warrior,” she said, and — as the younger brother of Christopher Williams, arguably the best student-athlete in RRHS’s 25-year history — Marcus said he was “trying to carve my own” while “wanting to be good people to each other.”
Then a junior shooting guard, he played a key role in the 2006-07 Rams boys basketball team’s run to the Class 5A state championship. 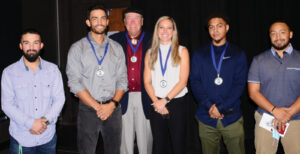 “(Morelock) is all about kids and that’s what he’ll tell you,” said RRHS Athletic Director Vince Metzgar in his intro. “He made it more fun for everybody.”
“My mother always told me my mouth would get me in trouble,” Morelock quipped. “I’m proud to be a part of (RRHS athletics as an announcer). It’s been great; thank you very much.”
Morelock had some advice for future parents of student-athletes: “Don;t give your children names you need to explain to the announcer.”
The six were later introduced to the large, enthusiastic football crowd at halftime. 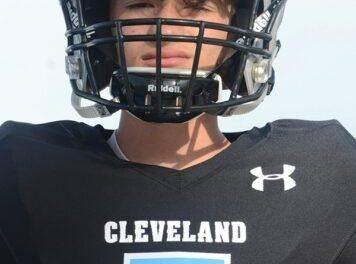