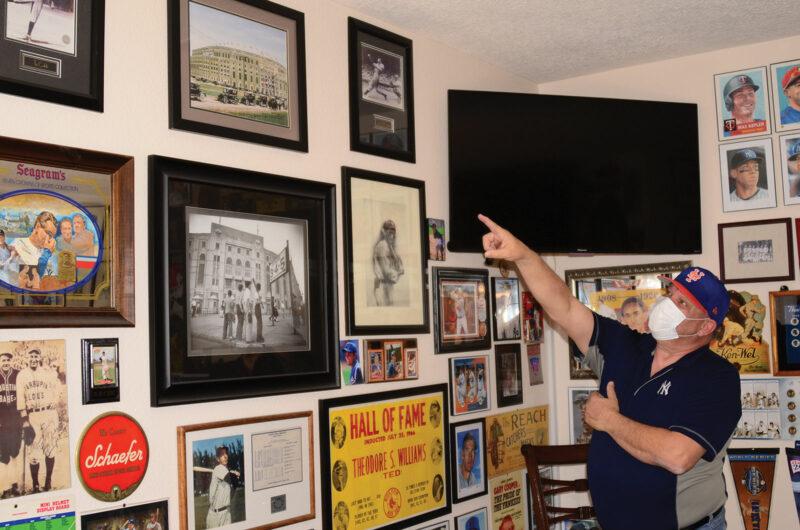 Joe Grimando points out a collectible he doesn’t want a visitor to miss in the New York Mets room of his home.
Photo Gary Herron / Observer

All you have to do is enter his home in north Rio Rancho through the front door, and there it is: a pool table in the middle of the room, with memorabilia throughout.

“I’m proud to show it off,” he tells a dazzled guest.

Grimando, quite an athlete in his days at Forest Hills High, dreamed of playing professional baseball, but the sudden death of his father in 1975 ended that dream.

(Kelly Grimando, skip this: That means in less than 20 years, he’s amassed more than a quarter-million baseball cards.)

Born in Brooklyn too late to see the Dodgers play at Ebbets Field, Grimando did what a lot of baseball fans found themselves doing after the Dodgers and New York Giants departed New York for California in 1958: They waited four years, until 1962, when the New York Mets were born — two years before the Grimando family moved to Forest Hills in Queens, where he lived much of his childhood.

“I’ve seen many concerts at (Shea Stadium),” he added, recalling Jimi Hendrix “booed off the stage” after opening for the Monkees — a concert an older sister took him to.

Grimando, approaching 63 years of age, was too young to remember that birth of the Metropolitans, but he knows enough now to understand the history of the team, with two World Series won in his lifetime: 1969 and ’86 — the latter which he and those fans will never forget.

Sure, there was the collapse in the 1988 playoffs, the World Series loss to Oakland in 1973 and the loss to the Yankees in 2000, but real fans stick with their teams through thick and thin.

It doesn’t hurt that Kelly has a relative that works for the Mets and can provide him with more “stuff” for his room — as if there’s any place to stick it.

Nor is there any place to add more items featuring his idol, Mickey Mantle, in his office, where every wall seems covered and bookcases display his love for “The Mick.” Yes, Grimando knows No. 7 — Seinfeld fans may recall George Costanza wanted to name his son “Seven” — played for the Yankees, but when it comes to Mantle, for many collectors it doesn’t really matter what “your team” is.

Among his half-dozen Mantle autographs in the Mantle Room is a baseball signed on the same panel by Mickey and former Yanks teammate Roger Maris, who staged a memorable home run chase in 1961 that ended with Maris eclipsing Babe Ruth’s single-season record of 60 home runs with 61 of his own. (Yes, there’s a poster from Billy Crystal’s epic film, “61,” in the room.)

He moved to Florida, staying there about 10 years, in what he calls his bachelor years, running a ground-transportation company for a trusting soul.

“In 1999, my mother called and said, ‘Joseph, we miss you; we would like to see you back home,’ and I went back to New York — and I’m glad I did, because that was where I met my second wife.”

After meeting and wedding Kelly McGuire — “I never thought I’d take that walk again, but then, when I met her, I knew immediately ‘That’s the woman I want to spend the rest of my life with.’”

Later, he said, “My wife accepted a transfer from the store she was in in Jersey to a store in Connecticut. We then went to Connecticut… and then to the west side of Cleveland — Avon, Ohio, which is probably one of the most-beautiful towns I’ve ever lived in, a mile off the lake.”

They had a home built, Kelly opened a store in Westlake; they lived there nine years and had two children.

“I was stay-at-home dad. I ran a little photography studio out of my home; I was shooting newborns,” he recalled. “I loved my photographs, my landscape and everything.

“We moved here in 2013; she decided she was away from her family for a long time — they’re all here,” he said, explaining the move to Rio Rancho. “All the McGuires and Poppes, her mother’s family, are all natives of Albuquerque.”

After renting for five years, they found “exactly what we wanted,” which included a large home on a cul-de-sac, and a great backyard.

“The price was right — and I filled it up with baseball stuff,” he said, lamenting the wall space he gave up to Kelly in a hallway just off the front room. 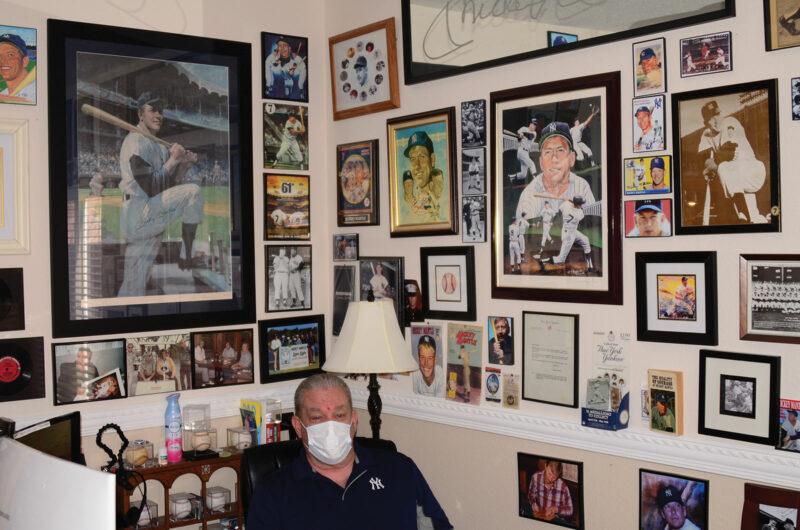 How does one amass what became a collection of 250,000 baseball cards?

It goes back to living in Ohio in 2002 and participating in an eBay auction for a Mickey Mantle baseball card.

“I was the losing bidder, and I freaked out that I lost,” he said. “I said I would never lose another bid and I started collecting Mickey Mantle from that day forward. … My earliest is probably the 1955 Bowman ‘TV’ card.

“Anything Mickey; anything odd, that was out of the norm, I would purchase,” he said. “If I had to spend a decent buck, I would. I only wish he were still with us.” (Mantle passed away in August 1995.)

Of course, for baseball fans, it’s really hard to focus on one player or team. The chase for Mets “stuff” was a natural — “I was a stone’s throw away; I went to mostly Mets games growing up … I was a diehard Mets fan.

“I was on the field in 1969 as an 11-year-old, trying to get home plate when they won the World Series, but the bigger guys pushed me out of the way,” he lamented. “I was also at the game, with my brother and father, the Tom Seaver one-hitter that Jimmy Qualls broke up with two outs in the ninth inning. … We were sitting on the steps, directly behind the plate in the nose-bleeds.”

(For the record, that was on July 9, 1969; there was just one out when Jimmy Qualls of the Cubs slapped a single to spoil what could have been a perfect game for the late Seaver.)

“I was there when the Yankees beat the Mets in the 2000 World Series.”

Grimando also buys a lot of new baseball cards, focusing on who he thinks will be future stars. He looks on the collection as an investment for his kids.

And he’s got something you don’t see every day, and never — except at Grimando’s home — in Rio Rancho: a signed copy of the famous Dowd Report, on Pete Rose, compiled by special counsel John M. Dowd in 1989 at the request of then-Commissioner Bart Giamatti to assess allegations that Pete Rose had bet on baseball games during the 1986 season while the player/manager of the Cincinnati Reds; the report concludes that there is significant evidence that Rose bet on baseball.

“I was never into (collecting) sets,” Grimando said. “I’d just go for the ‘hot’ player — I have so many cards in that (category). I get my rookies, put the rest into base cards and get them to the kids. I can’t even give them away.”

Although he never got to see “The Mick” play, he hopes to soon see a player that many believe could be the “next” Mantle, Mike Trout of the Angels.

Grimando has put together a fine stack of mint Trout cards, but he still remembers opportunities he had long ago that could have him holding a nice stack of Mantle cards.

“When we moved from Brooklyn to Queens, I was in parochial school,” he recalled. “And I remember grabbing a bunch of cards before I left the house, because we would flip them in the parking lot before we went into school.

“If you had a heads and I had a tails, I would win. If it was tails-tails, you would win,” he said. “How many Mantle cards I must have flipped … who knows?”

(Observer sports editor Gary Herron is always seeking collectors with their special “man caves,” such as those featured in recent months and proudly cared for by Rio Ranchoans Shannon Winsor and Greg and Debbie Waltner. If you’d like to see your cool room featured in these pages, send an email to gherron@rrobserver.com.) 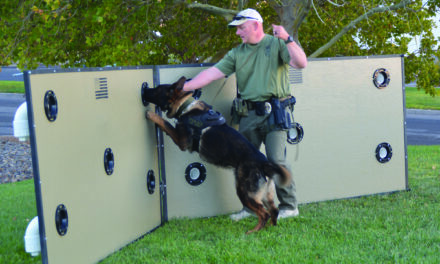