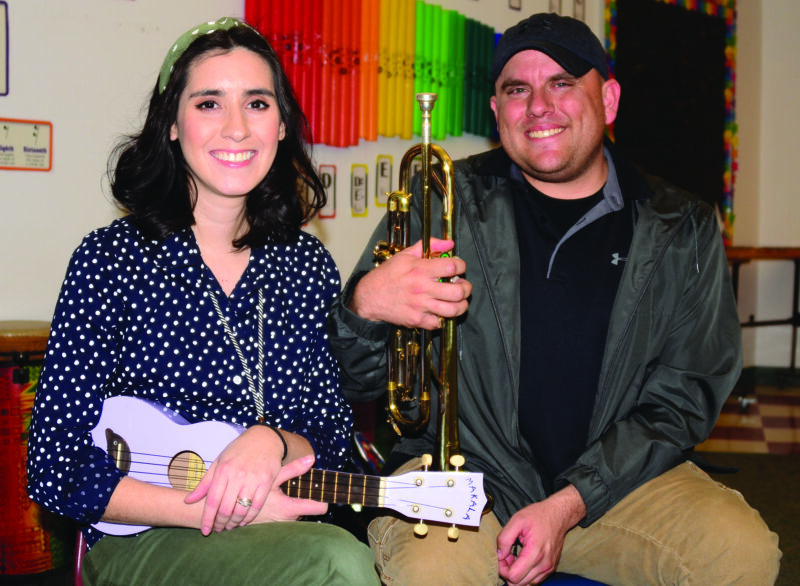 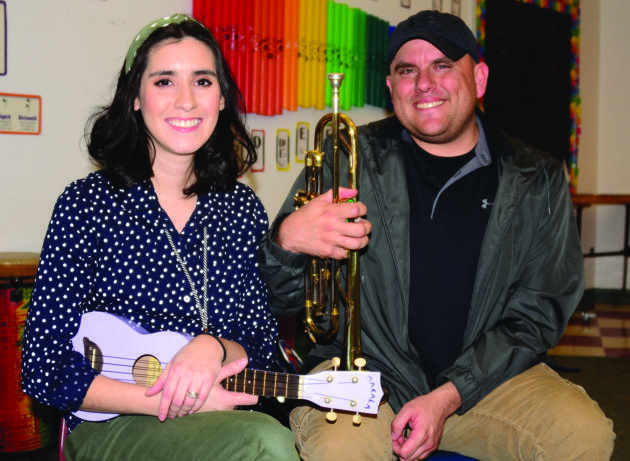 Decades later and they’re music educators in Rio Rancho Public Schools: Daniella Holmes is in her first year teaching music at Enchanted Hills Elementary, and her husband, Daniel Holmes, is the director of music at Cleveland High School.

“Daniel and Daniella have a wealth of experience with students at many levels, and I am so happy they have brought their talents to RRPS,” Fine Arts Executive Director Kurt Schmidt said. “I have seen both work with kids and am so impressed with their rapport with their students.”

That they’re married isn’t so unique in RRPS, Schmidt said: “We have many arts teachers who are or will soon be married to each other, and other arts teachers who have teaching spouses in the district. I think it is a real testament to RRPS that couples choose not only to teach in this district, but have also chosen Rio Rancho as a community in which to raise their families.”

The Holmeses met while attending New Mexico State University, where they played in the university’s PRIDE marching band. Before arriving in Rio Rancho, they shared time in El Paso, when Daniella was teaching at a middle school that fed students into Coronado High School, where Daniel was the assistant band director.

There aren’t any virtuosos in elementary school. Daniella’s philosophy is to teach an appreciation of music.

“I think you can learn it,” she said.

For many children, that appreciation starts by playing a recorder and learning basic tunes. Throughout her classroom, though, are other instruments, including drums and xylophones.

She teaches six classes of music and, on Tuesday and Thursday afternoons, has band class.

Daniella began playing a violin in El Paso, but when the family moved briefly to Deming, there was no orchestra, “so I picked up the clarinet in sixth and seventh grade.” Back in El Paso for her high school years (Franklin High, Class of 2004), she was a percussionist.

Daniel said his career in music began when he found he had a knack for playing piano “by ear”; he was 6 or 7 at the time.

“I wanted to be a sports writer till my senior year in high school,” he said. “My favorite sport has been basketball.”

Attending Cibola High School (Class of 2003), he discovered that freshmen can’t do both: He had to make a choice between playing in the Cougar marching band or trying out for basketball, as both occupied “zero hour.”

You don’t see many pianos in marching bands, of course, so it was a good thing his folks bought him a trumpet — and a mute, he said, so they’d have some sense of peace and quiet.

As a matter of fact, he’s still a trumpeter: He plays in the Jerry Dean Band and the Abel Lucero Band, and for a time was the lead trumpet in the Paso del Norte Big Band.

Following graduation, the two musicians met through mutual friends, had classes together and then began dating. They were wed in 2011 and enjoyed an Earth, Wind and Fire concert at Colorado’s Red Rocks Amphitheatre during their honeymoon.

They haven’t always been together since their NMSU days.

Daniel did his student teaching at Coronado High in El Paso, and then spent three years at Albuquerque High before getting the assistant band director’s job back at Coronado High, along the way seeing some of Daniella’s former middle school musicians. When a vacancy opened at Cleveland High, he successfully applied and has been there three years.

There aren’t any tryouts for the Storm Regiment marching band, he said. Basically, the bigger the band, the better the sound.

So many Storm students want to be part of the bands that he has two pep bands — a silver one and a blue one — and each plays at three basketball games, earning “lettering points” along the way. The music list about 20 songs.

Recently, he OK’d a rock band, which played a small selection of tunes — among them, “Purple Haze” by Jimi Hendrix — on the concourse.

Asked what would be their dream concert, Daniella said she’d love to see the late Leonard Bernstein leading an orchestra; Daniel’s choice would be the Lincoln Center Jazz Orchestra.

“Here’s one fun fact,” Daniel brought up for Observer readers. “Being we’re music teachers, when we go home, we rarely talk music. We binge-watch ‘The Office.'”

Asked what their go-to tunes or bands are, Daniella said she likes listening to soundtracks from movies; Daniel opts for music from the 1980s.

They do have to keep an eye on their kids, though: They have a 6-year-old son, Davien, who goes to Enchanted Hills Elementary, and a 19-month daughter, Dulcinea.

“And one,” as Daniel might hear at Storm basketball games — they are expecting another child in August. 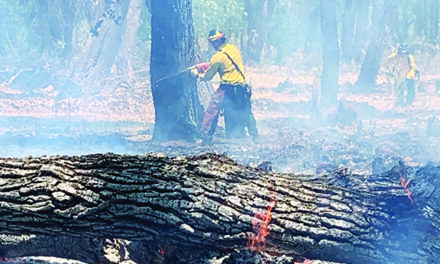