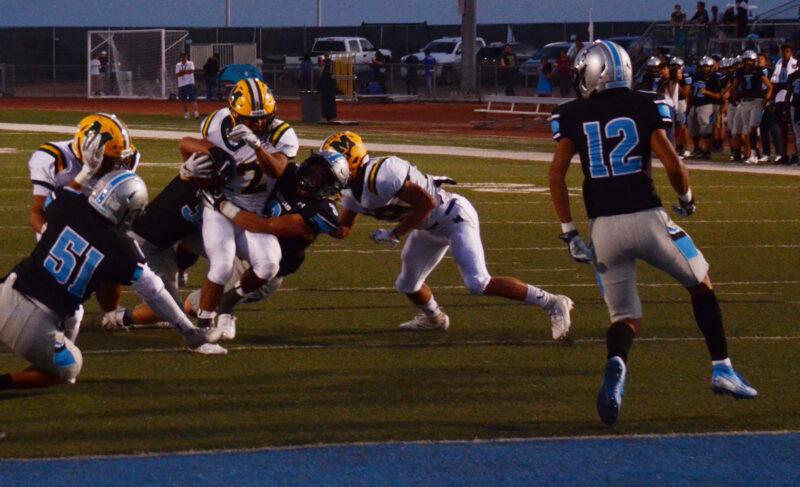 After a scoreless first quarter, in which the Storm defense kept Mayfield (2-1) from scoring despite a first-and-goal at the CHS 10, the Trojans opened the scoring on a 28-yard field goal for their lone lead of the game.

The Storm (3-1) led 14-3 at halftime, and scored three unanswered touchdowns: on a 57-yard pass from Jeff Davison to Trey Ortega, plus 5- and 2-yard runs by Lewis. That second TD by Lewis came after Ortega intercepted a pass from Mayfield quarterback Zach Ingram on the Trojans’ 38.

“I’ve never been hit like that before,” he said later. “When my leg went like that, I knew nothing was wrong, but it hurt — it hurt. But then, I just had to suck it up and I knew I was fine — all the rehab paid off.”

Mayfield came right back on a four-play, 72-yard drive, capped by a 34-yard run by Aaron Thompson, who led the MHS offense with 84 yards on 13 carries.

Davison coughed up the ball on the Storm’s next possession, but Mayfield went three and out.

Cleveland went on a quick scoring drive of its own, 65 yards on five plays, ended on a 4-yard TD run by that quick-healed Lewis with 9:32 left to play.

Cleveland extended its lead with its second-teamers in the game, as Lucious Dickson scored on a 23-yard run in the final minute.

“Give credit where credit’s due: Mayfield’s a good football program,” CHS coach Heath Ridenour said. “We knew their defense was pretty stiff. We didn’t convert some fourth downs (2 of 4 in the first half), third downs (0 for 5 in the first half, 1 for 9 in the game); you convert those, the game’s different.

“We had a couple penalties that pushed us way back, Week 4, those are moments to learn from and get better,” 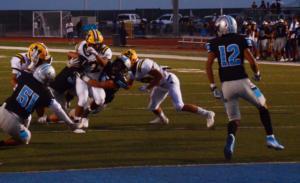 The Storm defense came up big during a first-half goal-line stand, keeping the Trojans off the scoreboard. No. 12 is Trey Ortega, who later thwarted another Trojans drive with an interceptions.. He also scored his team’s first TD on a 57-pass reception.

Friday’s meeting with the Trojans was the seventh time the big-school powers met, but only the second time in the regular season. They split two state quarterfinal games, split two semifinal games and Cleveland beat the Trojans 48-28 in the memorable 2011 championship game at the Field of Dreams.

… The players were back in the field house Saturday morning to eat burritos and watch game film. On Monday, despite there not being school in session, Ridenour will have his players on the field at 6:30 or 6:45 and practice till 9 a.m.

… The Storm head east to Artesia and the Bulldog Bowl on Friday for a 7 p.m. kickoff. 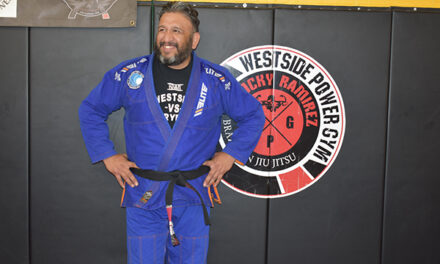