Letter to the editor: Sheriff not doing the full job

In his letter to the editor last week, Sheriff Jesse James Casaus patted himself on the back for doing his job.

He failed to mention, however, that he is not committed to doing the full job he was elected to do. Upon taking the oath of office, he affirmed that he will “… support the constitution of the United States and the constitution and laws of this state…”

Yet at his personal request in 2019, the county commission voted to make our county a Second Amendment sanctuary, effectively thumbing its nose at federal and state gun-control laws with which it disagrees. This means that Casaus will only selectively enforce the law when it comes to keeping our residents protected from gun violence.

If Casaus deems a gun-control law to be unconstitutional, he has asserted that he will not enforce it. As he is well aware, it is the courts that are empowered to determine a law’s constitutionality, not the sheriff or the county commission.

Firearm death rates in New Mexico have long been higher than the U.S. average and are a leading cause of violent death. Common-sense gun-control measures such as background checks and red-flag laws are effective ways of reducing firearm injuries and death.

Sandoval County needs a sheriff who will respect all of our laws, not just those that conform to his political ideology. 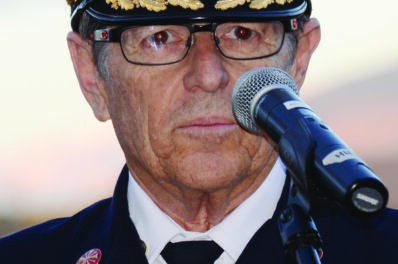