The Southern Christian Leadership Conference of New Mexico will have a one-hour program featuring two civil-rights icons at 3 p.m. Monday on KUNM (89.9-FM) Radio.
According to a news release from SCLC, during that Martin Luther King Jr. Day program, listeners will hear from:
• Bernard LaFayette Jr., chairman of the national board of SCLC and one of the “Freedom Riders” challenging segregation on buses and in bus terminals. He was also on King’s staff, director of Operation Breadbasket and now teaches King’s nonviolent philosophy throughout the world.
• Bishop Calvin Woods, a friend of King. He traveled throughout the South, and they spent a lot of time together. He is the vice chairman of the national board of SCLC. 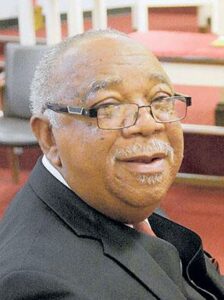 Both will discuss close moments they shared with King. They will be interviewed by Rev. Charles Becknell Sr. of Rio Rancho, also a member of the national board, where he serves as chaplain, according to the release.
Cecilia Webb will be his co-host; she is president of the Albuquerque Chapter of the National Council of Negro Women and host of the Train to Glory radio program.
“We know Dr. King was a civil rights leader, a pastor and all that stuff; what was he like — in sports, in music? We want to humanize him,” Becknell said. “We want to public to know, what was he like when he wasn’t doing what he did?”
SCLCNM plans to give two scholarships to seniors this year and a donation to the New Mexico Black Lawyers Association in the name of Raymond Hamilton, a late Harvard Law School graduate and Albuquerque native who spent his life amplifying the voices of people of color and diversifying the practice of law.
The group is looking for donations, which will help SCLC survive as an organization until next year. Contributions may be mailed to P.O. Box 44565, Rio Rancho, NM 87174-4565.
Due to the pandemic, the 11th annual Dr. Martin Luther King Jr. Luncheon was postponed, according to the release. If the pandemic is under control, there will be an event during the latter part of Black History Month in February.