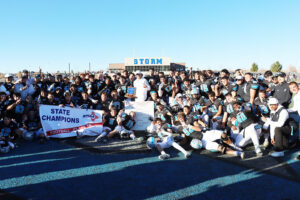 It was, once again, a November to remember for Cleveland High football coach Heath Ridenour.

Hands down, in spite of the handful of state championship garnered by city teams, the impressive streaks assembled by the CHS football team rank as the Observer’s No. 1 sports story for 2021.

Taking a 22-game winning streak into the ‘22 season, the Storm have also won 15 consecutive games played at Lightning Bolt Stadium, have beaten the Rams in their last seven meetings — which includes the 2019 and 2021 championship games — and twice came back from 20-point deficits in the first half to emerge victorious.

Ridenour knows his team’s annual success is due to what he calls “the process,” but he won’t take long before crediting his assistant coaches, players, players’ parents and the school’s administration for getting his team recognized as the top program in the state.

This fall, Ridenour — heading into his 11th season as head coach — is only four wins shy of 100 for his career with the Storm. He’s 96-18 — an incredible .842 winning percentage — on the sideline with the Storm.

His last win of the 22-game streak came on the sunny Saturday afternoon of Nov. 27, when their 35-14 victory over No. 2 Rio Rancho. It was the third time in the calendar year the Storm had beaten their city foe. (They also beat Las Cruces three times in ‘21: in Las Cruces, in Albuquerque and in Rio Rancho.)

“We got tired of starting slow,” Ridenour said. “We wanted to come out and leave no doubt — four quarters of Storm football proves, without a doubt, we’re the best football team in the state of New Mexico.”

The Storm won their final five games of the 2019 season, after a District 1-5A setback to eventual No. 1 seed Volcano Vista.

Cleveland then rolled through its four games in the spring, including a 56-7 destruction of Las Cruces in what the NMAA termed a bowl game — Luke Wysong, named the Gatorade Player of the Year in the state (and later in track & field, too) scored five touchdowns in that game, played at University Stadium.

Following the fall championship, QB Evan Wysong was tabbed as the MaxPreps Football Player of the Year in the state. Like his older brother, he’ll be a Lobo after his May 2022 graduation. 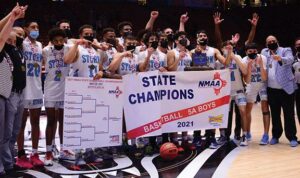 No. 2: Storm collar Bulldawgs for 5A state basketball title

The third time was the charm.

The Cleveland High School boys basketball team, which had suffered championship-game losses in The Pit in 2015 and 2018, finally captured the blue trophy the evening of May 8 in The Pit, 55-49, over No. 3 Las Cruces.

It was a seesaw battle, the kind you like to see waged in The Pit, where the Bulldawgs won the 2020 title, beating Capital — which ousted the Storm in the semifinals — for their second title under coach William Benjamin.

The Storm had lost a pair of four-point finals, 60-56 to Hobbs under original head coach Brian Smith in 2015, and 53-49 to Atrisco Heritage three years later, with Sean Jimenez at the helm. Cleveland knocked AHA from contention with a 58-54 home victory in this year’s semis; AHA won state crowns in 2018 and ’19.

“Hats off the Cleveland; Sean did a tremendous job,” Benjamin said.

“Defense made the difference,” Jimenez said, echoing what Smith once preached in his D2O (defense to offense) philosophy. “Our motto this year has been ‘Guard to Win,’ and when it came down to it, these guys played it like crazy.”

“It’s a blessing and I’m glad these guys did it,” Jimenez said in the postgame media conference. “These seniors are untouchable, man, and I’m talking about as people: You’re talking about a 4.0 (Hasberry), close to a 4.0 (Watson). ‘Yes, sir. No, sir.’ They do what you ask, and they deserve the success they’re going to get.”

It capped a great season for Cleveland, which won its first nine games before falling at AHA, 59-57. The Storm again swept Rio Rancho, extending its winning streak over its city foe to 11 games.

The Storm righted the proverbial ship and won the next five, taking the 1-5A trophy and then rolling through the state tournament with a 60-49 win over visiting Santa Fe in the quarterfinals and avenging their sole loss, 58-54, over visiting AHA in a semifinal.

It also marked the seventh season in a row the Storm made the final four.

No. 3: Rams get it done on the soccer pitch

Jamal, with the feed, and Lamar, with the goal, paired up for the lone tally in the Class 5A boys state final on April 10, and that 68th-minute goal was the difference for the sixth-seeded Rams in a 1-0 triumph over No. 4 Albuquerque High at Robertson Field.

It is the first blue trophy in this sport for Rio Rancho (10-2), which opened in 1997. This was the program’s first appearance in the championship game, although the Rams had been in the final four five times previously.

On a counterattack, Lamar Bynum, also a member of the New Mexico United Academy team, chipped in a goal from about 20 yards out, over the onrushing Julian Lucero, Albuquerque High’s goalkeeper who was trying to cut down the angle and limit Bynum’s shooting options. Bynum lofted it over Lucero.

“I was honestly preparing for overtime,” Lamar Bynum said. “But I was like, ‘no, I can outpace their back line.’ It popped out to my brother, and I put my hand up. He already knows we have that good chemistry, and he put it over the top.”

Rio Rancho knocked off three of the top four seeds this week in the playoffs: The Rams won in Las Cruces April 6 against No. 3 Mayfield, then ousted No. 2 La Cueva in penalty kicks on Thursday night at the APS soccer complex.

Then, the Rams toppled the defending state champions.

“Credit to Albuquerque High – a well-coached, very skilled, talented team,” Rams coach John Shepard said. “They had the majority of the possession, but we knew they would, and our game plan accounted for that.”

In addition to Bynum’s tally, credit the Rams’ defense, who made goalkeeper Joey Diaz’s job easier all season. Including the final five games of the 2019 season, the Rams extended their streak of allowing no more than a single goal in a game against them to 17 games.

As hard as it may seem at times to shut out an opponent on the softball field, the Cleveland High School squad did that three times in a row to capture the Class 5A title — their first — on June 26 at Lobo Field.

The Storm’s 3-0 victory over third-seeded Carlsbad (18-3) completed the postseason trifecta.

All told, the Storm (21-2) racked up nine shutouts for the season, en route to garnering the No. 1 seed when the bracket was released.

The road to the title began with a 1-0 victory in a perfect game thrown at visiting La Cueva by Aalijah “Chiple” Alarcon in a quarterfinal game played June 22 and another 1-0 win on June 24; both of those games were played at the Shock Yards.

Cleveland scored the only run it would need in the bottom of the second, when catcher AJ Naranjo drew a one-out walk, and freshman Lillian Paboucek became her courtesy runner.

Center fielder Olivia Inclan laid down a nifty bunt, too late for the Cavegirls’ catcher to get Paboucek at second and unable to nab Inclan at first. Third baseman Tavia Fragua then singled to center field, scoring Paboucek.

Shortstop Ashley Archuleta led off the third with a double and went to third on an outfield error. One out later, second baseman Ryen Herman hit a grounder to first, but the throw to the plate was too late to get Archuleta and Herman was safe at first, with an RBI for the insurance run.

The Storm added a single and a walk before the third out, with Cavegirls starting pitcher Faith Aragon relieved by Haiven Schoolcraft, who induced Inclan to ground out and end the rally.

Cleveland made it 3-0 in the fourth.

Fragua singled but was retired on a close play at second on a fielder’s choice off the bat of Avianna Fierro. Left fielder Mercedes Lovat’s sacrifice pushed Fierro to second, and she plated on an RBI-single by Archuleta.

The Storm were retired in order by Schoolcraft in the fifth and sixth.

Meanwhile, Alarcon didn’t allow a Cavegirl beyond second base through the first four frames, scattering three singles and relying on her defense to turn ground balls into outs.
The Cavegirls’ final gasp came with one out in the seventh. A single, followed by a batter reaching on an error by Herman at second gave them two base runners — and sent Storm coach Angel Castillo to the circle to chat with Alarcon.

Two infield groundouts later, the Storm were the state champs.

“They worked really hard and they trust their pitcher, and she trusts the defense,” coach Angel Castillo said. “We know Carlsbad — our girls compete against a lot of them in the summer, so we kinda know what they had.

“I’m just proud of their commitment to the program,” he said, planning to take some time off. “We hope to reload — we had seven freshmen that were moved up to the varsity, and our JV (lost only one game) … was one of the reasons we won — our JV competed against us and pushed us at practice every day.”

Like Avis back in the day, the Rio Rancho High School football team seems to be No. 2 all the time.

Hertz was then No. 1, and Avis proclaimed it tried harder.

Yet, try as it might — and it did in 2021 — as long as that team on the other side of Northern Boulevard keeps reloading, No. 2 will have to do.

Still, nobody else could beat the Rams in 2021.

The Rams waltzed through three of its four games in the Spring 2021 season; the lone setback was to the Storm, and that was a waltz for the other team: 42-0.

As the fall 2021 season began, Cleveland was the preseason No. 1 team and the Rams or La Cueva could be No. 2.

After Goddard had COVID problems, the Rams’ opener at the Wool Bowl was canceled.

Except for another game (Clovis) axed due to COVID problems, the Rams continued their slaughter: 40-0 over Eldorado, 61-7 at Organ Mountain and 50-0 over Carlsbad in Portales.

Then came the District 1-6A slate, with similar results: 65-35 over Cibola in a happy Homecoming win, 50-0 over Atrisco Heritage Academy and 57-7 at Volcano Vista, when Zach Vigil scored a season-high five times.

Oh-oh. Time to host the Storm in not only the annual City of Vision Championship Game and city bragging rights for now, but also for the 1-6A title.

The Rams jetted out to a 20-0 lead, and denied the Storm any points in their first three visits to the red zone.

But, after they had trailed at Volcano Vista by 20 points, the Storm weren’t conceding anything. But the Storm held on for a 28-27 victory after what would have been a game-winning field goal sailed wide right.

Also to nobody’s surprise, the city’s gridiron squads got the 1 and 2 seeds for the 12-team playoff bracket, with each receiving a first-round bye.

The Rams then whipped Cibola 44-20 in the quarterfinals and showed their pummeling of La Cueva may have been a fluke, but not the result, a 35-34 double-overtime win, secured when the Bears were pressured on a 2-point conversion by the aggressive Rams’ D.

So, here we go again: Rams-Storm, just like the battle for the 2019 state championship game but this time at Lightning Bolt Stadium.

It didn’t help that Vigil wasn’t his usual TD-finding self, after he suffered what appeared to be a painful rib injury in the game with La Cueva.

Seniors Devin Rice and Dominick Priddy picked up the offensive slack that sunny day at Cleveland, with Rice scoring on a 95-yard kickoff return and hauling in a TD pass from Priddy.

All-time, that left the Rams 4-12 against the Storm, who have beaten them the last seven times they’ve met.

In December, Vigil was named the Gatorade Football Player of the Year in New Mexico — the fifth Ram to earn that honor. 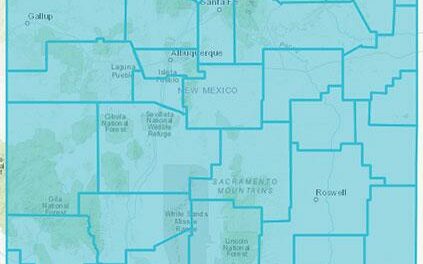 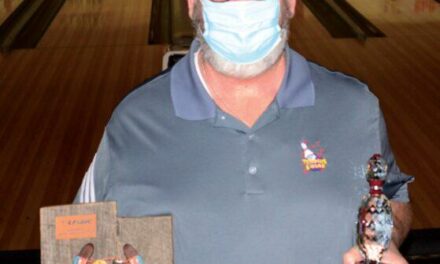