Will Young on the rings at Eagle Ridge Gymnastics in Rio Rancho. (Herron photo)

Will Young isn’t the first gymnast Brandy Wood has helped perfect his craft at Eagle Ridge Gymnastics in Rio Rancho, nor will he be the last such athlete sent on to a prestigious Division I national gymnastics power.

Young is merely the most recent, signing his national letter of intent at his high school, and he’s headed in the fall to Ann Arbor to mainly compete on the rings and floor for the University of Michigan.

Young, a La Cueva High School senior who’s trained at Eagle Ridge the past five years, visited five college campuses before deciding he wanted to be a Wolverine.

“I started gymnastics when I was 3. My older sister did it also, so she kinda got me into it,” he said. “I started at Gold Cup, in Albuquerque, because it’s next to my house. I fell in love with the sport; I’ve been doing it now for 14 years.”

He also played soccer, “but I had to pick. I picked gymnastics.”

The keys to success in gymnastics, Young said, are “a balance between strength and athleticism: Knowing where you are in the air and balance, everything all combined at once.”

He decided to train at Eagle Ridge five years ago “because of Brandy.

“There’s not much (gymnastics) in New Mexico, so we (gymnasts) all know each other,” Young said. “My parents always wanted me to end up here; they knew Brandy was the best coach in New Mexico.”

“I work really hard to get the kids in high school to college; that’s the goal here,” Wood said. “Help these kids do gymnastics beyond high school. It’s not easy for men gymnasts – there’s not that many roster spots out there.

“I work really hard to have a good relationship with all the college coaches. That has a lot to do (with my success),” Wood said. “(Young) got attention from every single school out there that have scholarships available right now.”.

His Instagram account is the prime source for interested college coaches, “where I post all my videos,” and interest piqued among them after he won at regionals. He has competed in meets throughout the Southwest.

“I’m not ready for the (Michigan) weather, but it’s beautiful out there,” he said. His father grew up in Grand Rapids, the home of former President Gerald Ford, who played football for the Wolverines.

“I grew up a Michigan fan,” he said. “I have grandparents out there. I went to Michigan a couple times as a kid, just to visit them. I grew up watching Michigan football.”

His academic pursuit will be in mechanical engineering, he said. “Their engineering program is top two. I think that was the big seller; the close second was Oklahoma.”

Success in this sport, in which he spends six days a week, only taking Sundays off to watch football, “doesn’t happen by accident.

“It takes the work – you’ve got to come to the gym every day, plan and listen to your coaches – they know more than you do. And believe in yourself.”

“He’s been one of those kids who’s been on the right path for a long time, and so it wasn’t a whole lot of work on my part to get him into the schools that he was interested in,” Wood said. 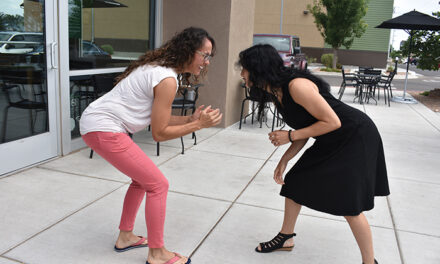