Beloved lifelong Dodger Tommy Lasorda, left, was at Isotopes Park in early 2009 when Tim Wallach was named the new manager of the Isotopes, as they began a six-year run as the AAA affiliate of the Dodgers. At right is team owner Ken Young.
Gary Herron Photo

In my decades of hanging around and/or working in the pressbox at first the Albuquerque Sports Stadium and then Isotopes Park, I had several occasions to chat with the late Tom Lasorda.

He passed away recently at the age of 93 — following the loss in 2020 of seven (!) Baseball Hall of Fame members. Rightfully so, Lasorda was also an HOF member.

Lasorda was really one of a kind, and we’ll still see him on the MLB Network, getting kicked on his butt while ducking a line drive, F-bombing a reporter after being asked what he thought about Dave Kingman, going face-to-face with an umpire or running out of the dugout after Kirk Gibson’s magical home run in the 1988 World Series.

He “taught us the game of life,” former Duke and MLB player Tom Paciorek told the crowd at a luncheon before the 2007 Triple-A All-Star Game, which was played at Isotopes Park. (I had to root through my hundred or so cassette tapes containing my interviews and radio shows going back to 1979 to find that quote.)

Lasorda, appropriately, was named the first inductee of the Albuquerque Professional Baseball Hall of Fame.

After Paciorek, aka “Wimpy,” handed the mic to Lasorda that night, ol’ Tommy revealed that every year Paciorek wanted to donate $25,000 “to the family of the Unknown Soldier.” (“He’s still got that check,” Lasorda added.)

Yeah, the late Lasorda may have bled Dodger Blue, but he knew the game of baseball, too, and loved his players. Of course, he didn’t love the lesser-used players as much as he loved those who were making contributions on the Dodgers.

One of my favorite Lasorda stories is when he encouraged the Dodgers to draft his godson, a fellow by the name of Mike Piazza — which they did, in the 62nd round of the 1988 draft. Piazza, who played for the Dukes in 1992, is also in the HOF; Lasorda said he let him be the Dodgers’ batboy when the Dodgers played in Philadelphia. (Lasorda was from Norristown, Pa., not far from the Piazza family home.)

“I want you to draft him,” Lasorda said, which meant more than 1,000 players were drafted before him, but the Dodgers’ scouts said he couldn’t do anything. Flash forward a few years, Lasorda said, and “the New York Mets signed him for $91 million.

“You can do it, and you’ve got to believe that,” he added, hopefully encouraging the all-stars.

And he had quite a sense of humor, too.

He regaled the crowd about the 1972 Pacific Coast League season, when he managed the Dukes to the championship; it was his only season managing here.

He had a message for the all-stars in the crowd: “The harder you work, the luckier you become. So make up your mind: How much of a price are you willing to pay to reach your goal? 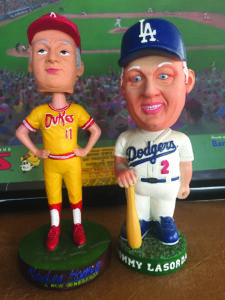 Bobbleheads of Tom Lasorda have been made with him as an Albuquerque Duke, left, and as a Dodger.

“If you’re not prepared for when that opportunity arrives, you’ll probably fail,” he added.”

Possibly listening was International League star Joey Votto, maybe the only starter in that game that you’ve heard of; he went on to be the National League’s MVP three seasons later and is still active.

But the humor was what he’ll be remembered for from that night.

He recalled interviewing for the Dodgers’ managerial post, where he’d succeed Walt Alston, who’d been there 23 years. Asked if he could match that record, Lasorda replied he was only hoping to live 23 more years. He managed the Dodgers for 20 seasons, winning championships in 1981— with a lot of former Dukes — and 1988.

Lasorda said he wondered why there were so many Italians in the U.S. named Tony, until he found out, “When they shipped them over from the old country, they stamped on their forehead, ‘TO NY.’

“When you do say your prayers at night, if you have any compassion in your heart, you’ll say a prayer for Tommy and the Dodgers,” he concluded, done with his speech.

In early 2009, Lasorda was in Albuquerque again, this time to introduce former MLB player, and former Dodger, Tim Wallach, announced as the Isotopes’ new manager. After six years of serving as the Class AAA affiliate for the Florida Marlins, Albuquerque was on its way to spending the next six seasons as the Dodgers’ triple-A affiliate.

“He better give us a good ballclub here, or he’ll hear from me,” Lasorda said. (The Isotopes went 80-64 and won the PCL’s American Southern Division, but then lost a best-of-five series to Memphis, 3-0.)

“I have so many wonderful memories here,” he said, setting up an old joke, and “seeing how large this city has grown. When I was here, they could drop a bomb in downtown Albuquerque and it wouldn’t do $40 worth of damage.”

I’ve occasionally tweaked one of Lasorda’s gags when I tell people this: “My girlfriend told me I love baseball more than I love her. I told her, ‘Yeah, but I love you more than I love football and basketball.’”

It was said Lasorda had only two wishes late in life: to live to the age of 100 and see the Dodgers win another championship.

Heading to Heaven, he’s batting.500: The Dodgers won the 2020 World Series, and he was there in Arlington, Texas, to see it. 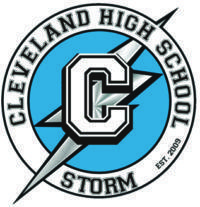