It’s been hard this spring, at least for baseball fans, not to have Pacific Coast League games being played in Albuquerque at Isotopes Park.
It’s not a “first”: There was no baseball in the Duke City in 1959, and none for two consecutive seasons (2001-02) earlier this century.
It’s been almost 20 years since the Albuquerque Dukes played their last game, and Albuquerque would go two full seasons without pro baseball until a new ballpark was built on the same corner as the Albuquerque Sports Stadium.
The 2003 season marked the debut of the Albuquerque Isotopes, to many Dukes fans’ chagrin, most of them wishing the “new” Pacific Coast League entry had carried on with Dukes.
First- (and only) year Dukes manager Tom Gamboa, succeeding former Dukes player and manager here in 1999 Mike Scioscia, led the team to an 86-58 record, good for first place in the Central Division, but the Dukes lost to PCL champ Memphis in the playoffs, three games to two, before Memphis beat Salt Lake, 3-1.
“He did a heck of a job for what he had,” recalled former Albuquerque Journal Dukes beat writer Dennis Latta. “Everyone knew it was the last year. Front-office people had left, finding jobs with other teams. … It was like baseball in hospice.”
Pro baseball at the northeast corner of University Blvd. and Cesar Chavez Blvd. SE, played there since 1969, became a short-timer, it was learned in March 2000, when owner Robert Lozinak sold the franchise to Marshall Glockman and Mike Higgins in Portland, Ore., for a price estimated to be in the range of $10 million to $12 million.
That was quite a profit for Lozinak, who’d bought the team 21 years earlier for $340,000. After the season, the team was a goner … off to parts west. The franchise rights went to Portland, which also got the Dukes’ moniker, while the team, still held by the Dodgers, headed to Las Vegas and Cashman Field, where it would remain from 2001 to 2008.
A few years later, knowing the moniker “Dukes” had no intrinsic value in Oregon, Albuquerque businessman Fred Matteucci bought the rights to the logo for $500, and you don’t have to look hard to find the “conquistador” emblem these days.
The Sports Stadium was demolished, although some concrete was left intact and is part of the new ballpark on the site. And the large concrete baseball that was once at Tingley Field and then moved to this spot when the Sports Stadium was built, is still there. Many fans meet their friends near this landmark, and children love having their photos taken while they’re astride the ball.
Jim Lawwill, starting his 17th season calling Dukes’ games, was joined by newcomer Rick DeReyes, who spent the past three seasons describing the games of the Class A Lancaster JetHawks in the California League. Games were heard on KDEF (1050-AM).
The final regular-season game
Eric Gagne made his seventh start of the season in the regular-season finale, played on Tuesday, Aug. 22, in front of 11,424 fans at Delta Air Lines Fan Appreciation Night. Nashville won the game, 8-5, but the Dukes’ playoff hopes were still alive, with 12 more games, all on the road, remaining.
Paul LoDuca, playing left field, and catcher Geronimo Gil each had three hits in the game for the Dukes. Ironically, perhaps, the Sounds’ starting third baseman for that game was Jason Wood, a future Isotopes “legend.”
Wood started at first base in the next PCL game played on the site in April 2003.

A ticket to the Dukes’ last regular-season game in the 2000 season.

Two more home games remained — the start of the best-of-five playoff series with the Memphis Redbirds. Memphis won the first game at the Sports Stadium, 11-4, played on Sept. 6, 2000. Only 3,608 fans cared enough about the lame-Duke team to come out to that postseason contest.
The next night, Gagne got another “last game” start, a 5-2 Dukes win on Sept. 7, to knot the series at a game apiece. Albuquerque took the first game at Memphis for a two-games-to-one lead, but the Redbirds won the final two games of the series and the Dukes were but a pleasant memory.
By the end of the season, 338,103 fans  came out to see the team. In the Dukes’ 29 seasons in the PCL, more than 8.4 million fans had been to games at the Sports Stadium, 1,200 of them victories; and for 14 years in a row, the team had attracted more than 300,000 fans.
In the final season, 52 players wore Dukes uniforms, ranging from Mike Berry and Jorge Nunez, one game apiece, to Chris Ashby, in a team-high 134 games. Outfielder Chris Donnels was the lone Duke at the Triple-A All-Star Game — and the last Duke  to earn that honor.
Pitching coach Dean Treanor became the inaugural manager for the Albuquerque Isotopes when they began play in the 2003 season. Ashby and Donnels were on the ’03 Isotopes’ roster. 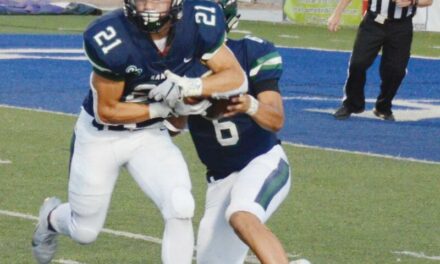 Cleveland does it again: Storm boys and girls are 1-5A champions