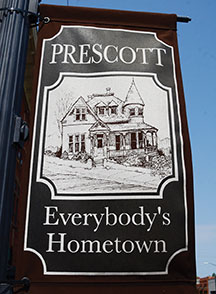 Finally — after two years without a trip out of state — we “got out of Dodge.” (A few years ago, we literally got out of town to visit Dodge … City.)
But this much-needed trip was another adventure into a part of the West we’d never seen: Prescott, Ariz. (By the way, it’s pronounced, as we learned there, “Press-kit.”)
It’s an extraordinarily clean city, although there were too many loud cars speeding through the pedestrian-friendly downtown and, it seemed, everyone in Arizona smokes.
And Prescott’s got maybe the best nickname of any place: “Everybody’s Hometown.”
Suffice it to say, a 400-mile drive last Sunday got us there, and that included a brief stop to stand on a corner in Winslow, plus visit the historic La Posada Hotel — and enjoy some of the tin work done there by Rio Rancho’s own Verne Lucero.
Once in Prescott, we checked into the historic St. Michael Hotel, built in the early 1900s after a horrendous fire burned down the original building, then known as the Hotel Burke. 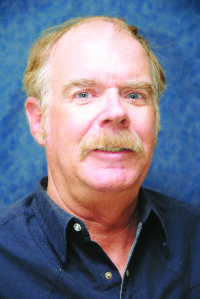 What made this three-night junket unique was the fact that after we parked the car in a nearby parking structure, we didn’t get into the car again until it was time to leave on Wednesday morning. Everything we wanted to see was well within walking distance — and I walked a total of 16 miles from Sunday-Wednesday!
Those forays included a walk around the Yavapai County Courthouse, with a large plaza that seemed to bring out every dog-owner in the area for walks along the shaded sidewalks there.
To the east were some gorgeous homes built in the 1800s and Cortez Street, filled with antiques and collectibles shops — and, sure, we spent some of our hard-earned New Mexico bankroll there.
To the west, seven miles away, loomed Thumb Butte, which helped me know what direction I was headed in on a daily basis; we could see that butte from any place in town.
One evening, we dined at the historic Palace Saloon, a place where — prior to a devastating fire that consumed what had been Whiskey Row on July 14, 1900 — Wyatt Earp, Virgil Earp and Doc Holliday, along with many other colorful characters of the Old West, drank.
On Tuesday, we visited Sharlot Hall Museum, aptly described as the crown jewel of the state’s central highlands. Hall was a historian and she managed to get the state to donate what had been the governor’s mansion, built in 1864 and still on its original site, for the start of this museum in 1927.
There weren’t many disappointments on that trip: I was unable to find the grave of “Big Nose” Kate and what we had expected to be a jazz concert near the courthouse didn’t take place.
The biggest disappointment — covering eight miles of I-40 in just over two hours because of a “construction project” (We didn’t see any workers!) — came well after leaving Prescott and visiting Ash Fork and Williams. Fortunately, the trip home featured overcast skies and rain to keep us cool for the middle of July.
We’ll be back, Arizona.
After a September trip into Colorado and Wyoming, primarily to see a Colorado Rockies’ ballgame and the world’s largest steam locomotive (UP 4014), we’re headed back into our neighbor to the west, off to historic Bisbee — to take in a day of old-time baseball at Warren Ballpark — and to Tombstone, a better place to see in November than July, obviously.
Yup, it’s nice to return to our own version of normal! 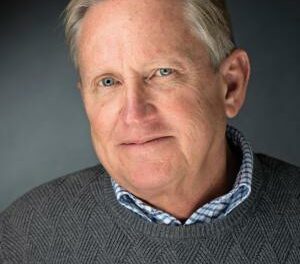 Puerto Rico could be the fifty-first state