As far back as he can remember, Cleveland High senior Nic Trujillo, with arms raised, has been coming to Storm football camps, first as a youth and later as a player and instructor. (Gary Herron/Observer))

The pressure’s off for Cleveland High’s Nic Trujillo.

No need for 1,000 receiving yards and double-digit touchdowns,.

He doesn’t have to worry about his future in football, his favorite sport of the three he competes in for the Storm. He also plays basketball and, when he’s not hurt, runs on some relay teams during track season.

He’s committed to the University of New Mexico, as is the guy who throws him the football, Evan Wysong.

No need to worry about college coaches watching the games, and if he lets the pigskin slip through his fingers. This All-State first-team slot receiver knows he’ll be wearing the Lobos’ cherry & silver in 2023.

What will he be working on this season to advance to that next level?

Trujillo doesn’t care if he gets the touchdown catch, just that his team scores and continues to win.

And since a 35-7 loss to Volcano Vista at Community Stadium on Oct. 18, 2019, that’s all the Storm has done: win. As in 22 victories in a row, with another impressive streak at Thunderbolt Stadium: 15 in a row, and a stupendous 28-1 home mark over the past five seasons.

Trujillo’s pretty sure the coaching staff is cognizant of the success, but, “It’s always the focus – yeah, they talk about it – but we focus on whoever’s ahead of us.”

That means Centennial, which visits for the opener Aug. 19.

“Nothing really has changed,” he said of the new head coach, Robert Garza, who replaces Heath Ridenour, who’s now the quarterbacks coach at UNM. “He’s been here longer than Ridenour, so nothing’s really changed, and I think everything will be the same.”

How about that offensive line, which lost a few seniors to graduation?

The learning process has been a constant for Trujillo, a lifelong resident of Rio Rancho whose education began at Cielo Azul Elementary, continued at Rio Rancho Middle School and comes to an end next May at Cleveland High.

He thinks the first youth football camp he attended at CHS was about 11 or 12 years ago, and he’s never missed one. He worked the past few as an instructor with the coaching staff.

“My sisters were part of the first graduating class at Cleveland (2011), so I’ve been in the Cleveland district ever since I was little,” he said. ”I think I was at the first camp, maybe in ’10 or ’11.”

He also played for some Storm YAFL teams, with Wysong a teammate then, too.

Trujillo’s favorite NFL team is the Chicago Bears, namely because of NFL Hall of Famer Brian Urlacher’s career there – “I grew up a Lobos fan.”

Keep your eyes on the Storm player wearing No. 7 this season – he’ll be happily catching passes or blocking for his teammates as the Storm try to three-peat.

“Nic is a great kid. He is as reliable as they come,” said Storm coach Robert Garza. “You can count on Nic to get the job done, and what he is capable of doing offensively helps us out tremendously. His versatility to play multiple positions and his shiftiness make it really hard on defenders. He is definitely a game-changer and we are so happy to have him be a leader on our team.”

It’ll be a bumpy road, for sure, to what would be the sixth championship game for Cleveland, winners in four of them.

“It’s the toughest schedule in the state: two Texas trips, La Cueva, Centennial, Artesia’s really good,” Trujillo cautioned, sounding like a coach. “Everybody on our schedule’s good – we can’t overlook anybody.” 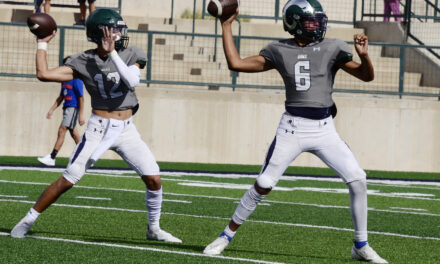 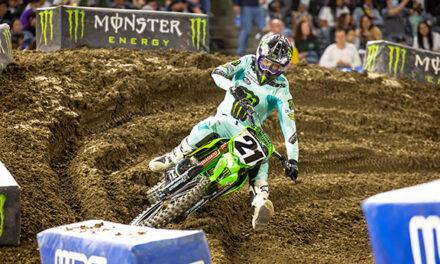