Home » Columns » From My Book Shelf to Yours: Only white people can be considered racist 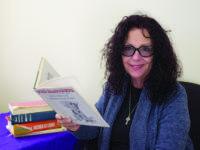 Robin DiAngelo’s “White Fragility: Why It’s So Hard for White People to Talk About Racism” (2018) is not an easy book to read. No, “White Fragility” is a disturbing, difficult book, a book that challenges white complacency and redefines what it is to be racist.

First, DiAngelo acknowledges there is no biological determinant of race. Rather, race can be seen as socially constructed, meaning that a person’s racial identity is defined by the society at large.

DiAngelo then argues that to be white in the United States is to be afforded privileges unavailable to people of color (POC), specifically black people.

This disparity in privilege, DiAngelo argues, is why only whites can be considered racist. She distinguishes between racial prejudice and racism.

For DiAngelo, racial prejudice is the conscious dislike of, and possible discrimination against, those of a different race, while racism refers to the privileges and benefits an individual accrues simply by being white. Such racism can be seen as systemic in that it permeates all aspects of American culture, from education to medical care to entertainment, and because only white Americans benefit from systemic racism, according to DiAngelo, only whites can be considered racist.

From my perspective, DiAngelo’s redefinition of racist detracts from her argument that white people need to overcome their fragility and start discussing and eliminating racial inequality.

Any attempt to redefine such a loaded term as “racist'” is bound to be met with resistance. If the point of “White Fragility” is to encourage whites, and as many as possible, to grapple with their own racism in an effort to ameliorate racial inequality, then it seems wise to use language that is less inflammatory.

In the aftermath of George Floyd’s killing, with the protests that are tearing the country apart, it seems to me that the language we use to initiate conversation and establish systemic change needs to be inclusive and not inflammatory.

However, I’m a writer; I understand the connotation of language, and I am at a loss to understand why DiAngelo would use such an inflammatory word, even if she has attempted to redefine it.

Letter to the Observer: We fought to vote, so vote

Letter to the editor: Government oversteps in business shutdown

Fire weather
May 10, 2021, 2:40 am
Come as close as possible to the heart of your community.
Subscribe Today!
error: Content is protected !!