There never have been more one-time City of Vision high school baseball players furthering their diamond careers in college than now.
The Observer spent quite a bit of time researching those student-athletes’ exploits in the 2022 season.

They once were Rams
Wille Baez at Central Baptist College (Ark.) earned American Midwest Conference second-team honors for the second year in a row. He was one of only five players in the entire conference to finish in double digits in home runs (11) while driving in 41 runs this season. For the season, Baez, now 25, played in 51 games, batted .317 and swiped 10 bases. CBC went 37-38 in the 2022 season.
Bohdi Bolen appeared in 17 games in relief for Pima Community College (38-17) in Arizona, where he was 1-1, with one save, and an ERA of 6.98.
Zach Bravo wrapped up his post-prep career at West Virginia University (33-22), the fourth college he’s pitched for, following stints at Eastern Arizona, Butler CC and Lamar. Bravo was 1-1 in seven games, six of them starts, with a 10.80 ERA.
Noah Brewer led Grayson College (38-18) with 48 RBIs and was tied for the lead in home runs with 12. He batted .297 and stole five bases in 52 games, and was named to the first-team all-conference squad as a first baseman.
He is transferring to the University Arkansas-Little Rock before next season.
Andrew Duran found the going tough when on the mound for Arkansas -Pine Bluff (13-36-1) after beginning his college career at Lamar Community College. He appeared in 16 games, 13 of them starts, and compiled a 1-8 record with an 8.02 ERA.
Gunner Gouldsmith was playing his first season at Sacramento State (Calif.; 32-26), where he batted .258 and drove in 22 runs while playing in 52 games.
Clayton Kempski batted .263, hit one home run and drove in nine runs at South Mountain Community College (27-29) in Arizona.
Tariq Levesque batted a healthy .382 while playing in 31 games at the College of the Southwest (33-20), where he swatted eight homers and drove in 52 runs.
Tyler Murphy, the son of RRHS baseball coach Ron Murphy, red-shirted at Texas A&M-Texarkana (33-24).
Garrett Rede appeared in 41 games at Arizona Western College (27-11), batting .265 with 12 RBIs.
Derek Romero got into two games at New Mexico Highlands University (15-31), where he struck out in his lone at-bat.
Eric Romero had a great freshman season at Feather River College (36-11) in California, batting .256, with two homers and 20 RBIs, in 46 games. His team was the Golden Valley Conference champion.
Ethan Silcox, who played at Cochise Junior College in 2021, apparently wasn’t active in 2022, indicating via Twitter that he was planning to transfer to UNM.
Stuart Smith appeared in 11 games, all but one in relief, and compiled a 4-2 mark, with a 7.01 ERA, at Fort Scott Community College (32-26) in Kansas.
Alex Stanfield, still a teammate of Clayton Kempski, he made five starts and was in eight other games as a reliever at South Mountain CC, compiling a 5-2 record with a 7.80 ERA.
Tyler Sunstrom was a freshman infielder at Luna Community College (7-34) in northern New Mexico, which didn’t publish stats.
Hudson White was at Pima CC (38-17) in Arizona, going 2-0 with a 1.42 ERA in seven games, all out of the bullpen.
Mitch Winter, designated hitter for Montana State-Billings (26-27), was named to the All-West Region/Great Northwest Athletic Conference postseason first team. Despite starting just 31 of 50 games this season and logging only 100 at-bats, Winter led the GNAC with 10 home runs and 34 RBIs.

They once were Storm
Alex Admire did not see action in his first season at New Mexico Junior College (42-17).
Julien Gonzales would probably like to forget his lone appearance for Ventura College (22-18) in California; he pitched 2/3 of an inning, walked two and gave up two hits, giving him an ERA of 54.00 for the season.
Christian Hoffman turned in a fine season at New Mexico Junior College (42-17), appearing in 41 games and batting .328, with 10 homers and 36 RBIs.
Jaren Jackson, transferring to UNM, was 6-2 in 13 games, all starts with one complete game, and a 2.80 ERA at Pima CC.
Roy Jennings played in three games for Trinidad State University (44-17) in Colorado, where he batted .333 with an RBI.
Jack Murano appeared in six games with an inflated ERA of 20.25 for the UNM Lobos, working only four innings all season.
Dayne Pengelly appeared in 18 games, with two starts on the mound at Embry-Riddle Aeronautical University (24-25) in Arizona, where he was 2-2 with an ERA of 9.26
Treston Shallenberger, the son of Cleveland High baseball coach Shane Shallenberger, ended his days at Gateway Community College (21-33) in the Valley of the Sun, where he was named the team’s MVP after batting. 369, hitting six home runs and driving in 39 runs, also stealing 18 bases. He was named to the conference’s first team all-star squad. “Shall” will be playing at Louisiana State-Shreveport next season.

Of all the Rio Rancho ballplayers active on the diamond this spring, former Ram Mitch Winter had some of the best stats. he’s at Montana State in Billings. (Courtesy photo)

a 2011 Cleveland High grad and a first-round draft pick by Boston that season, is playing with the Lexington Legends in the Atlantic League. Signed by the Legends on April 20, Swihart was serving as a designated hitter, and through his first 24 games, he was hitting .211 with two homers and six RBIs. 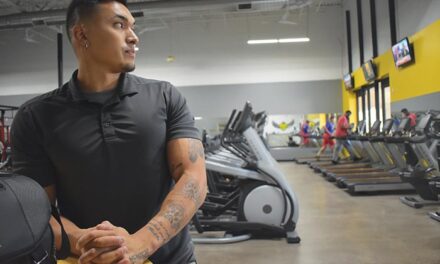