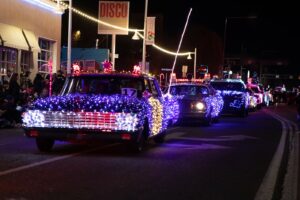 Vehicles are decked out in lights as part of the Twinkle Light Parade in 2021. (Courtesy of the city of Albuquerque)

Soon a glow will fill the streets of Route 66 in Nob Hill.

Over 4,000 people are set to participate in the 2022 iteration of the Twinkle Light Parade.

According to Bree Ortiz, Community Events Division manager, the participation numbers are higher than those pre-pandemic.

“About 75% of the participants in this year’s event are new,” Ortiz says. “We also have 10 car clubs that will cruise in right after the event. And it happens along Route 66, which is iconic.”

Ortiz says there are about 125 different groups set to participate in the event.

The long-standing city of Albuquerque event features vehicles and people all donned with lights.

“Everything has to have lights on it,” Ortiz says. “That’s what makes the event super special. There’s a lot of uniqueness in this event.”

The Twinkle Light Parade will roll west on Central Avenue through Nob Hill from Washington Street to Girard Boulevard.

The parade will be judged by Byron Morton and Sasha Lenninger from KOAT Action 7 News, Jackie, Tony and Ryan from 100.3 The Peak, and Jessica Garate from KRQE from the stage near Morningside Drive on Central Avenue. 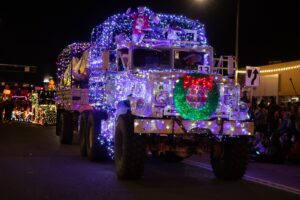 This year’s Twinkle Light Parade will feature more than 4,000 people participating in the event. (Courtesy of the city of Albuquerque)

The entries will be categorically scored on creativity, holiday spirit, twinkliness and “wow” factor.

Ortiz says the streets will begin closing at 3 p.m. so city officials can set up the route for the parade.

She says during that time, visitors are encouraged to shop local through Nob Hill. 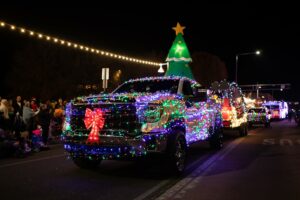 A truck is decked out in lights as part of the Twinkle Light Parade in 2021. (Courtesy of the city of Albuquerque)

“This year the Carpenter’s Union will be giving Santa a ride through the parade route,” Ortiz says. “Jolly Ol’ St. Nick will be leading Santa’s Cruise straight from the North Pole. The cruise consists of local car clubs to make sure Father Christmas always rides in style.”

WHERE: Along Central Avenue between Washington St. and Girard Boulevard NW in Nob Hill

HOW MUCH: Free to attend

Event details
The Albuquerque Twinkle Light Parade is free for the public to attend, and is a rain or shine event. Please be aware of and obey all posted street parking signs. Do not block Nob Hill residents’ driveways and access to their homes. The free provided Park & Ride is the preferred option for this event. Well behaved, leashed pets are welcome.

Public restrooms will be available at the following locations:

Free Park & Ride
Free parking will be available at the parking lot located on the southwest corner of Lomas Boulevard and University Boulevard.

Buses will run from 3 p.m. from the lot to Johnson Field throughout the event until 10:30 p.m. 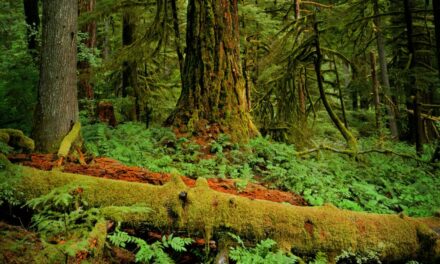