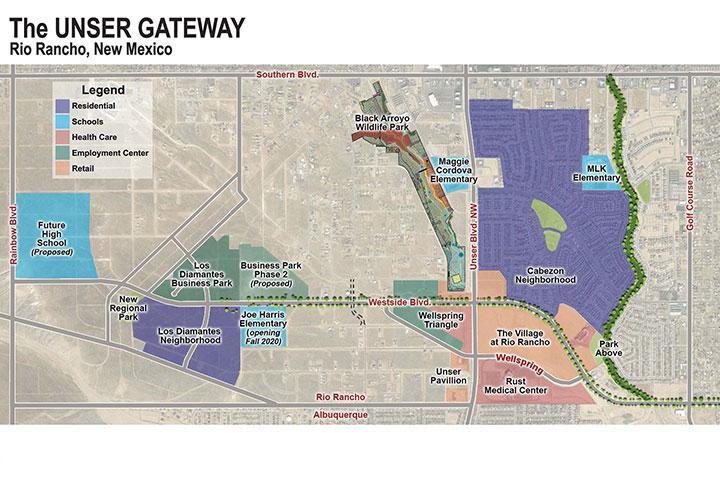 This map shows current and planned development in the Unser Gateway area, centered around Westside Boulevard, west of Unser Boulevard, in the city of Rio Rancho. Courtesy illustration.

The Unser Gateway is booming, as discussed in a Zoom webinar for NAIOP Rio Rancho Roundtable Thursday morning.

Siblings Eric Springer and Jeanie Springer Knight from Springer 5 Investments and silent partner Patricia Springer helped spearhead the development of this area, as their parents did.

“These were early visionaries of the Unser Gateway. My father, in fact, used to drive Unser when it was a dirt road and when Westside wasn’t even material yet. But he saw something in that part of Rio Rancho. He loved it and he started buying land parcels 30-40 years ago. Eric and I have been blessed to kind of step up and basically take his legacy and try to build forward,” Springer Knight said.

Her checklist of why the area is a good place to live and work consists of schools, medical facilities, housing, infrastructure and incentives. The last box that needs to be checked is job creation, she said.

Unser Gateway began to receive its initial momentum about seven years ago with Rust Medical Center’s 47-acre campus, Petroglyph Medical Plaza and the initial designs of The Village, Hull said.

The Village is adjacent to Rust Medical Center and is a 65-acre area intended for mixed-use development, said Bob Feinberg from Colliers International.

Ward said the three levels to the new Physician Office Building will house a breast cancer center, an ambulatory surgical center and a pain and spine clinic, to name a few. The building will also have space for future growth, she said.

About $39 million has been spent on the new facility, Ward said.

This is the hospital’s second expansion, Hull said.

“This has been a long time in the process, and one of the things I really focused on when I took office and my administration is looking at the building blocks and the tools that were in the tool belt and the structure that was put in place and how we could restart the economic engines in Rio Rancho and get all this moving,” he said.

In the area, Los Diamantes is being developed with about 178 acres. Westway Homes is adding a new subdivision with over 100 homes, Hull said.

“As an additional commitment to this area, the city is rehabilitating Unser in two places,” Hull said.

The city is in phase one of work on Unser Boulevard between Abrazo Road and Southern Boulevard. Phase two will be from Southern to the city limits, he said.

To further help development in the area, Sandoval County Chairman David Heil, District 4, opted to spend funding allocated to each commissioner for other road work.

“I chose to use part of my funds to help with the completion of the Wellspring and Westside intersection,” Heil said. “This will make some of the commercial properties in that area more available and easier to use, which ties into our whole concept of expanding the tax base.”

In addition, Heil spoke a little about the Local Economic Development Act, or LEDA.

This incentive is a small fund to help businesses interested in expanding in local communities. Businesses make a commitment to a certain number of new jobs and the county in return can allocate funds as an incentive, Heil said.

The 95-acre park in Unser Gateway will focus on more access to paved trails, additional benches and signage about flood control, and scenic structures.

SSCAFCA is partnering with the City of Rio Rancho and the Nature Project to help irrigate the 300 trees. SCCAFCA applied for a grant of about $350,000 and expects to receive the funds to support these improvements, Thomas said. The grant requires the county to match the amount it receives.

Thomas will know if the grant is approved by December; if so, improvements will begin in August 2021.

Springer Knight ended by saying everyone had filled their commitments, so job creation is left.

“We absolutely need to spread the word that we are out and about and we are hiring, so please let people know this is a great place to start a business, to expand a business.” 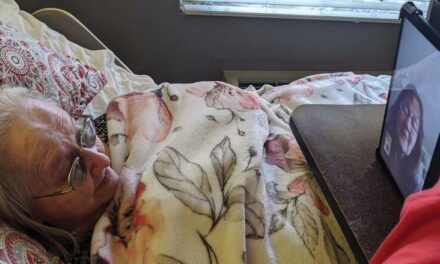 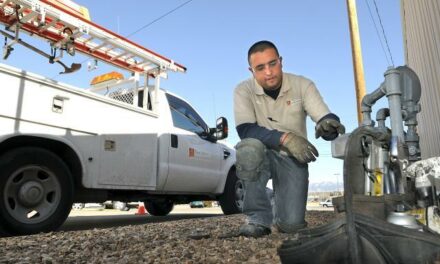 Gas rates may go up in 2021, depending on PRC decision