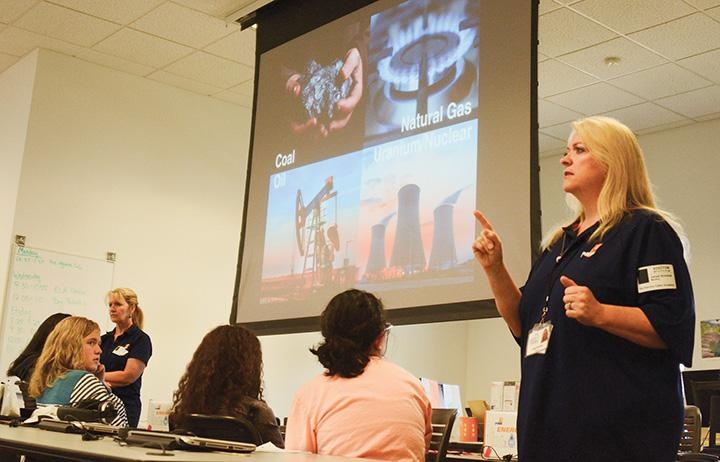 Maybe by now, some of their families have taken advantage of what the students learned, or have installed energy-saving devices handed out in free kits.

These Cyber Academy students were among 2,500 New Mexico high school students participating in “PNM Energy Innovation,” an interactive program that teaches the importance of saving energy, protecting natural resources and being environmentally conscious. Representatives earlier in the week had visited schools in Los Lunas, Las Vegas and Albuquerque.

Each participating student received a kit with easy-to-install items, including energy-efficient light bulbs, an LED night light, an efficient-flow shower head, a faucet aerator, a shower timer and a smart power strip. The kit also contained a guide for families to complete the installation together and learn ways to reduce energy waste. Here’s a look at what Cyber Academy students found in their free kits, courtesy of PNM. Photo by Gary Herron.

The PNM women and students chatted about convenience, comfort, energy efficiency and the environment, as well as renewable energy provided by the sun and wind. LEDs use up to 80 percent less electricity, students were told.

And, figuring some of the students spent a lot of time in the shower, the women told them how to save water using the shower heads in the kits and how to make sure their water heater wasn’t providing water that was too hot or too cold.

The PNM representatives also told them to use the kit-provided shower timers before and after installation of the efficient-flow shower heads.

The students received extra credit in their science class.

They were encouraged to fill out a 25-question home-energy worksheet in their kits and return them to be in the running for two pairs of headsets PNM was going to award. Cyber Academy teachers had the opportunity to receive $150 if 60 percent of the students responded.

“You really are the future,” PNM’s Laura Mabbot-Chabries told them.

In addition to what they could do this month, there could be future benefits, such as careers in the energy field.

Shannon Jackson of PNM talked about her career and other options in the energy field.

“You can also be very successful as an engineer at PNM,” she said.

The company is the largest electricity provider in New Mexico, serving more than 525,000 customers across the state.