One newly elected Corrales village councilor is focusing on preserving the community’s traditions and character. 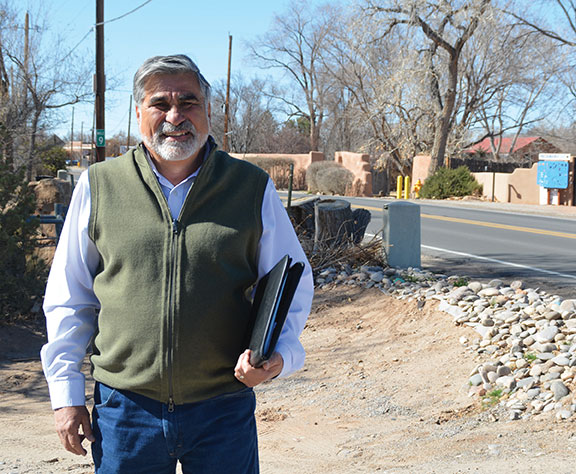 Rick Miera was elected to a four-year term as the District 1 councilor on March 1, garnering 247 votes to the 204 his opponent, Cora Frantz, received. He, two other village councilors and the new mayor are scheduled to be sworn in March 31.

Miera, who served in the state House of Representatives for 24 years, said he ran on the platform of preserving Corrales traditions.

“It’s going to be harder to do than it seems,” he said.

Corrales is largely surrounded by Albuquerque, Rio Rancho and Los Ranchos, and many residents want the village to change, Miera said. He and his supporters want to keep it the way it is, with livestock, lower levels of traffic and opportunities to stroll across the street.

He doesn’t want large stores, another connector road to Rio Rancho or four lanes on Corrales Road. When he lived in downtown Albuquerque, he said, too many businesses came in and pushed out the people who lived there.

“Neighborhoods really are the heart and soul of the community,” Miera said.

Many people want Corrales to switch from private drinking-water wells and septic tanks to a municipal water and sewer system. Miera said he would like to have such a system, “but at what expense?”

In his view, a water and sewer system isn’t a necessity, so he doesn’t support getting one.

“I know people want things to get bigger and better, more glitzy. But there’s a cost to that,” he said.

Miera said people visiting the village and spending money is OK, but he doesn’t want to grow the Corrales population. He also doesn’t want tall buildings or too much development.

He’s also concerned about the commercialization of recreational marijuana. Although the state won’t allow local governments to ban it, Miera wants to keep marijuana operations in Corrales in areas zoned for commercial use, not in the agriculture-residential zoning.

Preserving natural amenities such as clean air, the bosque and walking trails along irrigation ditch banks is another priority for Miera.

“They could go quickly, before we know it,” he said.

Corrales officials also need to be able to work with people in surrounding communities to address problems and negotiate for what the village wants, Miera said. He theorized that supporting Rio Rancho road projects might lighten Corrales traffic issues by drawing motorists to Rio Rancho, away from the village.

Miera has lived in Corrales for four years, but he’s been familiar with the community all his life. He was born in Algodones and lived in downtown Albuquerque for decades.

He had a career as a therapist, which makes him willing to address hard issues, he said. He worked for the University of New Mexico Department of Psychiatry as a drug and alcohol abuse and family therapist.

“They let us do a lot of things that were all about community,” he said.

Miera later served at the Bernalillo County Juvenile Detention Center. He brought in psychiatry residents to provide mental health treatment to inmates, which reduced recidivism and alleviated overcrowding, he said.

The juvenile detention center still has a low population, he continued.

“I’m really happy about that because kids are getting the services they need,” Miera said.

His career as a state representative for the communities around downtown Albuquerque ran from 1990 to 2014. He was the longest-service chairman of the House Education Committee, and led the Interim Legislative Education Study Committee, which involved members of the House and Senate.

Miera retired from the legislature as the House majority floor leader.

He said he was asked to run for village council because of his legislative experience. Being an elected official at the municipal level is different than at the state level, Miera said, but he started his public service with a local focus.

“I’m hoping I can do a little something here,” he said. The Placitas Garden Tour is scheduled for Sunday, Sept. 11